Y.C. Deveshwar has been hugely successful in using cash flows from the tobacco business to build multiple drivers of growth. 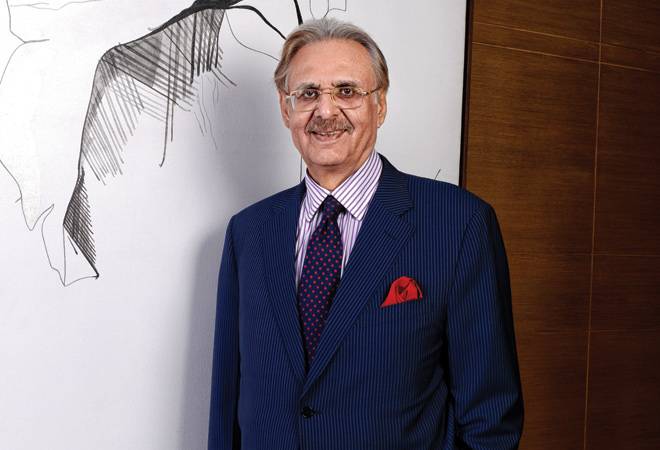 More than two decades ago, Y.C. Deveshwar had just taken charge as the managing director at ITC when a senior executive came up to him to inform him about his resignation as ITC had decided to sell the international commodities trading business that he was heading. It so happened that after completing the negotiations, Deveshwar changed his mind (to sell the business) - and so did S. Sivakumar, the executive.

That would be the defining moment for ITC and its future. For, Sivakumar went on to conceptualise, build and lead the highly complex agri business, which has not just transformed millions of rural lives through e-Choupals and created a new era of technology-led farming but is also the bedrock of most of ITC's current and future businesses - FMCG, retail, food, exports, chocolates, dairy, among others.

This foundation of the ITC of today was laid more than two decades ago when Deveshwar revisited ITC's vision. It was clear in the mid-90s that sin goods such as cigarettes and liquor would come increasingly under regulatory pressure and discouraged with high taxation.

ITC decided to shed businesses such as financial services, FMCG/edible oils, international commodities trading (though it wasn't sold finally) and focus on businesses where it believed it was strong: hotels, paperboard and agri. And then, it got into information technology and re-entered FMCG.

Why did the diversification fail before? "We did not give it our best shot. We moved on to the next business without taking any of these to conclusion. Also, we did not have a proper strategy to nurture those businesses. This time, what we did was to have a proper selection process, divesting those not matching ITC's strengths, and focusing on those that made sense for us," says Deveshwar.

This was also the period when just like his predecessor K.L. Chugh, Deveshwar was struggling to prevent ITC's largest shareholder, British American Tobacco (BAT), from taking control of ITC; BAT was asking ITC to stick to the knitting (as it did in the UK) and preventing it from diversifying into new areas. Deveshwar was able to reason with the government and financial institutions to keep BAT at bay and let ITC remain an independent, board-managed organisation, just like Larsen & Toubro. This ensured that BAT was not just unable to increase its stake but was also unable to prevent ITC from diversifying. It worked. Deveshwar got just the breather he needed to prove that his strategy was working. 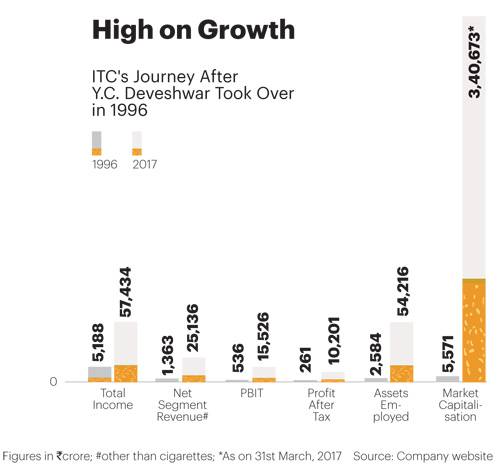 In the process, Deveshwar, with his undying faith in the Indian growth story, transformed ITC forever.

A lot of businesses ITC has incubated over decades now have the size and scale to be on their own. Take the case of Aashirvaad Atta. It has made ITC the second-largest buyer of wheat in the country after Food Corporation of India; it buys nearly one million tonnes every year. The agri and e-choupal business has worked towards providing livelihoods, improving agri quality and productivity and promoting climate-resilient agriculture. The choupal 4.0 will be equipped with latest digital technologies. Not to forget ITC's ability to leverage distribution and creating large brands: between these businesses, it has 25 mother brands which are either No. 1, 2 or 3 in their categories.

Besides, Deveshwar follows the strategy of incubating and nurturing businesses in their early lifecycle through healthy cash flows from tobacco until they are on their feet. "The reason we failed in edible oils was because we created a separate company. When you start a separate business, it's not easy to establish it. It takes time, it takes blood, it takes a lot of inputs. That is why we folded paperboard and hotels businesses back into ITC so that they could be nurtured by cash flows from our tobacco business," he says.

Even while pursuing profitability, growth and diversification, Deveshwar was convinced that all this could be achieved via triple bottom line - social, ecological and financial. So, even as ITC has a robust bottom line and reported a net profit of `10,201 crore in 2016/17, it's also a carbon positive company, a water positive company and a solid waste recycling positive company. It has also created six million livelihoods. At the heart of all that Deveshwar has done is to build the organisation to last. As Puri says, "We're not here for five or 10 years, we are looking at the next century".

If there's one business ITC believes has the highest potential to take the company into the next century, it's FMCG. Not just because India's FMCG penetration and per capita consumption levels are way lower than the world average but also because it's the space where ITC's enterprise strengths can be best leveraged. "We are hoping FMCG will be that business. It is a formidable opportunity. But it won't happen overnight," says Deveshwar.

In foods, the synergies are even more pronounced. "For good quality produce, you need good quality inputs. And we have hotels where chefs help us with design and testing of food products," says Puri. FMCG is where the company expects the steepest spike in growth with the `10,000 crore business projected to grow 10 times to `1 lakh crore in revenue. "That is how we are gearing the enterprise. We are building step by step. We've got into dairy, coffee, chocolates. The latest is sea food with shrimps," says Puri.

What's driving the FMCG space is ITC's science and technology centre where over 350 scientists focus on creating products for the new age lifestyle, especially in health and wellness space. The centre has over 500 patents to its credit. In fact, some of ITC's most successful products have been born at the centre - Aashirvaad sugar control release Atta; digestive biscuits from 100 per cent Atta with no artificial sweetener, no maida and no sugar; even juice made from real fruit rather than fruit pulp. "One litre of tetrapack is made of 25 pomegranates," says Puri. And finally, the 'Super Safe' spices. To meet global standards, they are tested for 470 contaminates versus 9-10 that are required under Indian norms. "The trick was to work with farmers with a package of practices so that these kinds of spices can be developed," says Puri.

The trick to succeed with such a diverse set of businesses was to leverage the economies of scale in manufacturing and distribution. This means making more businesses ride piggyback on common manufacturing and distribution infrastructure to distribute fixed costs and share variable costs. So, it started integrating factories and warehouses. ITC can now build a factory that has one biscuit unit, one juice unit, one soap unit, one confectionary unit, one shampoo unit, one noodles line, etc. The idea is to build such factories at multiple locations to get close to markets. Each time a product is manufactured, it has to be transported to a warehouse and then to distributors. If factories can have warehouses too, that's a cost saved. "That is what we are engaged in building now so that the cost of delivery is the lowest that anybody can have," says Deveshwar.

"When we were diversifying initially, if you look at the media reports then, the media was on the side of what our overseas shareholder was saying - stick to your knitting. But now I am being credited with enormous foresight. Remember we diversified at a time when there was no threat (to the tobacco business). As a matter of fact, you should do things well ahead of the threats emerging," says Deveshwar.

"Our strategy is extremely simple. To use tobacco cash flow to build multiple drivers of growth. And to build world-class Indian brands for Indian consumers and maximise the capturing of value within India," says Deveshwar.

But Deveshwar isn't still sounding the death knell for the tobacco business: "I don't think the tobacco business is going to die out despite the pressures. Do you think you can just snuff it out and rob people employed in the sector of their livelihood?" he says. True, as it is, this is as much a reality as it is a challenge.