It's never too early to prep for the year ahead. The winter chill may just be retreating and spring setting in, but you can begin planning your wardrobe for 2011's fall-winter by checking out the trends at the recent menswear shows in Milan and Paris.

Fall is fur real: From shearling to mink-either as trimming, collar components, full-weight jackets or head gear-fur was present in every form in the collections of Balmain, Alexander McQueen, Burberry Prorsum, Etro, Louis Vuitton and Kenzo.

Colourbar trumped as solid hues announced their arrival. Red ruled at Dolce & Gabbana and Alexander McQueen while Burberry's (left) outerwear was eye-popping in yellow, red, orange and royal blue. Paul Smith sent out a showstopping mustard-coloured duffle coat while Jil Sander experimented with suits in pinks and green, and jackets in the brightest tangerine. Move over, navy. 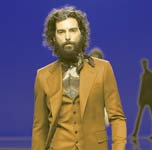 Retro redux. Roberto Cavalli's men walked out of the '70s with ultra-fitted three-piece suits, silk shirts accessorised with foulards, necklaces and trousers flared at the bottom. The Gucci guy too gave off the early '70s rockstar vibe with wide lapels and trouser legs that flared arrogantly over the shoe. That's what we call groovy.

The velvet dinner jacket was the most prominent piece of clothing from the fall collections of Lanvin, Bottega Veneta, Canali and Alexander McQueen. But it was Dolce & Gabbana that stole the show with debonair velvet suits in delicious plum. Get your hand in the velvet glove in 2011

Hats are tricky. Get it wrong and you look as out of place as a penguin in Bora Bora. Lanvin had sophisticated Fedoras while Dior Homme practiced monastic restraint with widebrimmed hats inspired by Amish men. Givenchy played along with furry hats with stand-up ears-in sync with the theme of Rottweiler printed dogfights on the clothes sent out by chief designer Riccardo Tisci.
Minimalism

V Silhlouette
One of the quirkiest trends to emerge from the fall collections in Milan was the Vshaped silhouette. Prada showcased striking geometric V patterns on sweaters while waistcinching cuts were very evident in Versace. Very flattering. Worth exploring, fellas.