Crafted and calibrated to perfection, Ulysse Nardin continues to evolve the tradition and science of complication watchmaking.

Set in 18 carat rose gold, this limited edition watch titled Yuvraj celebrates the cricketer. It was launched in Mumbai at the end of 2011.
Switzerland will not forget the 70s. This was the decade of the 'digital revolution', which married attributes such as functionality, speed and affordability with wristwatches. The technologically-liberating wave posed a serious threat to the country's watchmaking industry. Swiss watchmakers revelled in the monopoly of their hand-made timepieces since the 16th century.

Referred to as the 'Quartz Crisis', the 70s witnessed an overthrow of traditional artisan horology by machines. With Uncle Sam in the West and a rising sun in the Far East, Switzerland was buffeted by a digital whirlwind. In the mid 80s, a partial renaissance in the form of Swiss digital giant, Swatch, helped stabilise things with more than 2.5 million in sales worldwide. The dormant industry was thrown into action and re-conquered the world on new principles. The Swiss fought futurism with heritage. They had a powerful weapon-hundreds of years of watchmaking expertise.

The astronomical complication Moonstruck.
So, age-old horological hubs nested around Geneva focused their energy on complications. At the epicentre of this paradigm shift stood Ulysse Nardin, a brand celebrated for interpreting time in precious metal. Maker of Grande complications, UN was born in La Locle in 1846. In the prequartz days, it developed marine chronometers that assured sailors and military ships with high-accuracy readings. To establish its ascendancy in the dim watch scenario of the 70s, UN brought together entrepreneur Rolf Schnyder and anthropologist and scientist Ludwig Oechslin. The duo brought divergent perspectives to a common task. The brand, now akin to a Janus-faced giant, looked to the past for inspiration and to the future for technology. 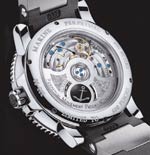 The skeleton movement of the Marine Perpetual.
Together, they crafted complications and other simpler wrist pieces, each of which has stood the test of ingenuity and stood out for its artistic idiosyncrasy. At the outset, they installed an advanced ETA 2892 movement which acts as a powerful base for diverse movements from Minute Repeaters which chime differently to hours, quarters and minutes; to dual time chronographs which adjust to time zones instantly. The Alexander the Great complication boasts a dramatic movement
The most ambitious offering from UN has been the Triology of Time series which included the Astrolabium (1985), Planetarium (1988) and Tellurium (1992). Astronomy is essence, the Astrolabium would have been a boon to Galileo, the visionary it pays homage to. This self-winding mechanical watch showcases the position of the sun, moon and stars as seen from earth. The Planetarium is a fitting tribute to the Polish astronomer Copernicus who first proposed the centrality of the sun in our corner of the galaxy. As the name suggests, the watch displays the position of the planets as they move around the sun. The Tellerium draws on Johannes Kepler's theory of planetary motion and is calibrated to indicate a geographic description of the earth from the North Pole. The new millennium saw complications around heroic figures.

Both Genghis Khan (2001) and Alexander the Great (2011) are minute repeaters which feature engravings of scenes from the lives of these historic figures. The carvings are synchronised to the sounds of gongs, moving to minutes, quarters and hours.

It's 2012, and the company is now spearheaded by Patrick Hoffman who slipped into the shoes of Rolf Schnyder's as CEO last year. UN's new strategy is to market its products by hiring local brand ambassadors and by adopting avant-garde technology like the Calibre 118 self-winding movement set in diamond and silicium.

In a world which shops online and knows luxury, more people turn connoisseurs everyday. This has driven the brand's global launches, and after South East Asia and Middle East Ulysses Nardin has its eyes on India. In its first ever Indian launch in Mumbai last December, Hoffman noted, 'the function of a watch has gone beyond its function of time and craftsmanship gets its due.' Ulysse Nardin's Chairman is the world's first luxury hybrid smartphone
To establish a connect with the Indian audience, Yuvraj Singh has been selected as the company's representative and launched a limited edition timepiece named after him. Encased in 18-carat rose gold, the brown dial is played out by large Roman numerals and three dimensional chiselled hands. The 43mm case of the dualtime Minute Repeater is individually numbered. The Jungle Minute Repeater's enamel dial is an interplay of wild animals
When asked about the choice of Yuvraj as the Indian brand ambassador, Hoffman pointed to tradition and said 'Watchmaking is an essential part of Switzerland's culture and cricket is its equivalent in India. Since Yuvraj is a modern day cricketing legend, we didn't look beyond him'. An Indian face increases the marketability and draws many more buyers. For instance, Chandigarh based entrepreneur Karan Gilhotra noted 'I bought the watch not just because I understand complications and the heritage of the brand, but also because Yuvraj is our local hero and we can relate to him'.

Ulysses Nardin has mastered the art of making abstractions precise. It is now faced with the challenge of retaining exclusivity in a fast expanding and evolving world of haute horology.

With its ability for Phoenix-like reinvention, there's little doubt on how it'll fare.