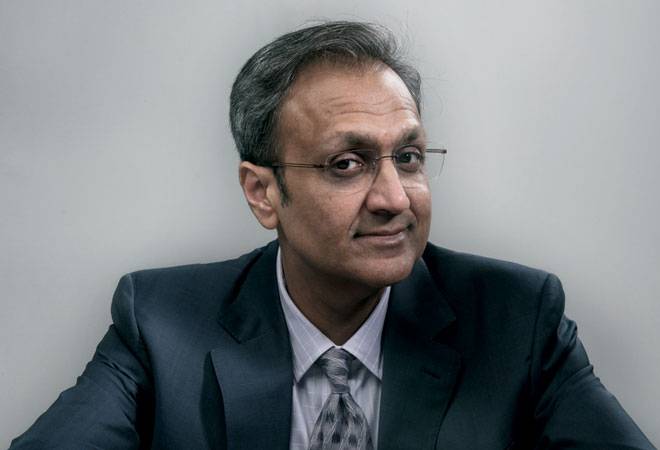 After the demise of Qimat Rai Gupta, the Founder and Chairman of Havells in November 2014, his son Anil Rai Gupta could sense the nervousness among employees that follows any top management change within a company. The younger son of the patriarch, ARG - as he is referred to within the 71-year-old firm - was the only one from the family to have joined the business. He had spent more than two decades managing the company with his father but knew it was crunch time for him as a professional.

"The big concern was, what will happen now? How will the organisation change? I made it a point to meet each and every employee (over 4,000 then) and each and every dealer - more than 2,000 distributors - within six months," he says sitting behind the large desk at his corner room office on the Greater Noida Expressway. "People expected I will start changing everything. I had to give them comfort that the culture of the organisation will not change, that modernism necessary to keep the organisation contemporary will continue. Higher professionalism need not mean that we lose the personal touch," he adds.

It's been a little over five years since ARG took over as Chairman and Managing Director and that personal touch has become part of the company's DNA. Havells has more than 8,000 direct dealers and a network of over 1,00,000 retail outlets across the country. ARG says company executives meet all of them at least once a month. "We may become a larger organisation but will continue to retain our small company culture," he says.

And Havells has become big under him. Since he took over, the revenue has nearly doubled to over Rs 10,000 crore (2018/19), logging a CAGR of 16 per cent in five years. The company has also ventured into many new categories such as air purifiers, water heaters, and even grooming kits. The high-profile acquisition of Lloyd in early 2017 gave it a foothold in the bigger consumer durables business. At the same time, it has not been shy of trimming down when needed. For instance, it divested its stake in its European lighting operations, Sylvania, to focus on the India business. "I was leading the Sylvania acquisition in 2007 and faced my most tricky situation as we faced the global financial crisis right after that. One of the thoughts was to exit but my father told me not to do so that time as it would have given an impression to stakeholders, including bankers, that we were quitters," he told me," says Gupta. "He suggested instead that we understand the problem, identify solutions, turn around the company and then, if we want to sell, go ahead. We were the first to turn around such a large company, with presence in over 50 companies, much before the other Indian companies."

In the last three years, despite the disruptions the Indian economy has faced due to demonetisation and GST, Havells has chugged along without fuss. In this period, it has grown even faster, logging 23 per cent CAGR in turnover and 16 per cent in net profit. This makes Havells the standout performer in the consumer durables category and Gupta the jury's pick for the Best CEO in the sector.

"We have tried to be closer to consumers. Anything that goes into the electrical socket, we want to play a part in that, hence the vision to get into consumer durables (Lloyd acquisition), as it takes us deeper into homes of consumers. The success we have had with our other electrical products gives us confidence that consumers respect the brand and an entry into a large category of durables will definitely help the company take its next leap," he says.

The skyline outside is hazy with smog, as is the case this time of the year in northern India, but Gupta's mind is clear. "Look at the pollution levels. People need to breathe clean air. Hence, the air purifiers," he says. "Our biggest focus has been on deepening the brand and our distribution network and change the perception in minds of consumers that electrical products need not be really high on quality."

However, like Sylvania in 2007, Lloyd is facing some headwinds. Its profile is less premium in its category compared to Havells and fetches lower margins. The disruption in the LED TV market with the influx of multiple Chinese players has also impacted its fortunes. After Havells' relatively weak second quarter results - revenue grew 1.75 per cent but profit was flat - analysts flagged Lloyd's poor showing as a cause for concern (it reported an over 30 per cent decline in revenue during the quarter). Analysts say Lloyd is dragging Havells down. "For Lloyd, although the near term appears challenging, the next summer could be a real test," brokerage house Motilal Oswal said in a report a day after Havells' second quarter results were announced in October. "With the new plant (for AC) operational, margins and working capital benefits will be the key factors to watch out for." 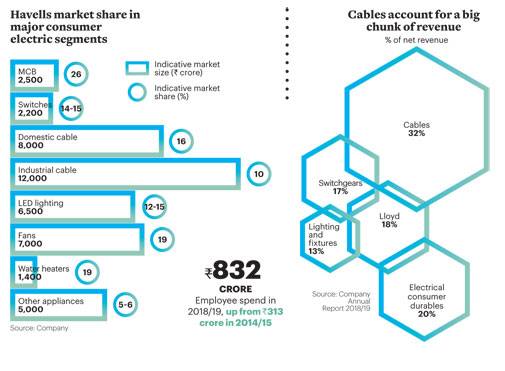 Gupta says Havells does not enter any random category, but once it gets its teeth into it, aims to be among the top three in the segment. "We do not want to be seen as a marginal player. Lloyd is a bit weak because of the LED panel disruption but we are just playing the part of a filler there. There is (also) a bit of a trough in ACs right now. Our new production is coming into the market only now. I see margins coming back over the next couple of years. They may not be at the Havells' level because Lloyd's segment operates at high single digit to 10 per cent kinds of margins. That is where Lloyd will also be."

"What is satisfying with Lloyd is that everything expected from Havells has been integrated into it over the last couple of years. The foundation needed to be built for growth over the next 5-10 years has been built. We kick on from here."

Prodded on where the group will go from this position of strength, Gupta, who loves to sing old Hindi songs to unwind - he even as a recording studio at home, is ready with the numbers - Rs 20,000 crore turnover by 2022, then Rs 30,000 crore, and beyond. But soon he gets bored with the financials and goes back to his pet topic - people.

"Any company is a group of people. One that is people oriented will remain sustainable as an organisation. You cannot build it only based on technology because that can change over a period," he says. "My entire focus is to bring empathy into the company for all stakeholders."

This isn't mere lip service. The company's spend on employees has gone up from Rs 313 crore spread over 4,013 people in 2014/15 to Rs 832 crore over 6,536 people in 2018/19. It has been rewarded with employee loyalty. More than one-third employees have been with Havells for over five years now.

"My task is to manage people. If somebody is displaying a product to me, I want to know how I can motivate him further. Without me, even if I do not meet him for six months, how can he remain motivated? To ensure he treats this as his own business, I need to look at the long-term part of the business. I have been here for 25 years. I will be here for 15-20 more years. Am I building organisational capabilities, a team of people that can take Havells forward? I can see it in their faces - how driven they are. That is the benchmark I have set for myself."

At a time when India is facing its worst job crisis in recent years, this will be music to people's ears.