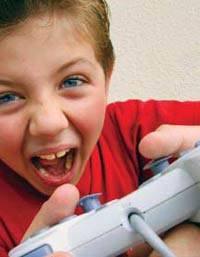 Video Games Don't Kill The Brain
Here's news for those who think that computer games kill imagination - and brain cells. A study by Michigan State University published in the research journal Computers in Human Behavior says that both boys and girls who play video games tend to be more creative, regardless of whether the games are violent or nonviolent. MSU said that the more 12-year-old kids played video games, the more creative they were in tasks such as drawing pictures and writing stories. In contrast, use of cell phones, the Internet and computers (other than for video games) was unrelated to creativity, the study found.

Making Light of Mosquitoes
In the era of sci-fi, it wouldn't be tough to imagine a tent made of laser that would protect you from harm. Now Szabolcs Marka, an associate professor of physics at Columbia University in the US, has almost made it a reality. He has developed a light shield that repels mosquitoes. The laser interferes with the insect's power to sense humans via light and heat. He has already got $1 million from the Bill and Melinda Gates Foundation, one of whose aims is malaria eradication. Marka and his team are working to develop a device that that can be placed where mosquitoes hide. 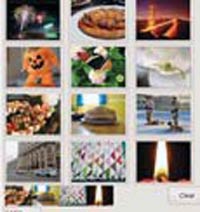 Picture Protectors
Financial firms, like HDFC Bank, use images in addition to your password for online security . Now researchers at Stony Brook University in New York have come up with a system called PhorceField to stymie phishers. Phorcefield requires users to choose four images from 12 as part of their graphical password. Tests proved it is well nigh impossible for the phisher to come up with the exact 12 images for the user to choose from every time he or she logs in.


1%: The per cent required to be shaved off current broadband prices to allow five million more households around the world afford the Net, according to analyst firm Point Topic. 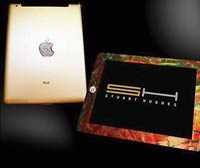 5 mil pounds for an iPad
If you thought your Rs 45,000 tablet was a costly indulgence, retreat in embarrassment. British luxury goods specialist Stuart Hughes has come up with an iPad 2 that costs 5 million pounds (approx Rs 39.7 crore). The tablet is encrusted with 12.5-carat diamonds and has 53 separate gems forming the iconic Apple logo. The back section has been formed in 24-carat gold and weighs 2 kg. But the most expensive part is the front frame-crafted from a 75 million-year-old stone, with shavings of the thigh bone of a Tyrannosaurus rex. If you want to buy it, you have to rush. Only two are being made; one is already gone.

Is the iPod assassin on the loose now?
Samsung has recently released what many are calling the iPod killer. The Korean company's Galaxy Player 5.0 is a brilliant phone-like product that can connect to the Internet using Wi-Fi. It works on a single-core 1GHz Hummingbird processor and 512MB of RAM. With a 3.2-megapixel rear camera, Android 2.3 Gingerbread, moderate price tag and many other features, Galaxy Player 5.0 looks like a great music player. Watch out, Apple.

How fast is fastest?
The K Computer developed by Riken Advanced Instutute for Computational Science, Japan, and Fujitsu has become the fastest supercomputer with a calculating speed of 10 Petaflops per second. Ten Pflops is equal to 10 quadrillion floating point operations per second. If that doesn't make sense, here is a translation: it is the amount of calculation over 16 and a half days done by all 7 billion people in the world, with each person posting one calculation result every second. And the K Computer does all this in one second. Talk about fast!

Dead But Alive On Facebook
With so much of our lives played out on social networking sites, it would not be surprising to find it following us to the life beyond. Precisely. Facebook now allows users to memorialise a profile of a deceased person so that friends can continue to mourn publicly on the profile page. After receiving proof of death, Facebook will lock the page and still make it available to existing friends.

Apps = Money In Piggy Bank
If you are rich, you will download software on your smartphone or a tablet. If your bank balance is pitiful, you probably don't even know what an app is. This was the finding of a study carried out by a San Francisco non-profit group Common Sense Media. It found that almost half the families with incomes above $75,000 had downloaded apps for their children, compared with one in eight of the families earning less than $30,000. More than a third of those low-income parents reported they did not know what an app was. CSM said this finding was important because " parents increasingly are handing their iPhones to their 1 »-year-old kid as a shut-up toy".

Take On Tech
"When you write a scholarly work, it tends to be understood by very few people, and has one publication point over time. But when you build a service, you can touch millions, to hundreds of millions of people directly."
REID HOFFMAN,
Executive Chairman and Co-founder, LinkedIn, in New York Times. LinkedIn was founded in 2002. Today it has more than 135 million registered members across 200 countries.