When a former colleague and friend asked Pravin Tatavarti, Managing Director at talent management firm Allegis India, to employ his autistic son, he agreed. There wasn't any reason to say no. Venkat had a masters in commerce and was applying for a data entry role. What he didn't know was what this would entail. "I didn't know anyone with disability and had no experience of dealing with them." Venkat's performance was decent but his social skills were poor. He didn't greet anyone, would get jittery, and once even pulled a colleague's hair. It was when he entered the ladies room that the human resources manager wanted him to leave. For Tatavarti, it was a litmus test considering that as the leader of a service organisation, his job was to help customers get the best out of people.

"Venkat did what he was wired to do, and to leverage his talent, we had to learn to make him a part of our life," he says. He did a town hall asking employees to be sensitive and, instead of making a fuss, politely tell him to stop. That was in 2014. The company has come a long way since then. It now has 41 people (out of 5,000) with disability and an employment centre, 'Garv Se', which helps them find the right job.

Organisations across the world are waking up to the potential of hiring the differently abled. In India, the trend caught steam around five years ago, and several companies started it as a pilot by hiring visually and speech and hearing impaired. Today, 20-30 per cent of their employees with disability are in managerial roles. The two big drivers of the trend have been The Rights of Persons With Disabilities Act 2016 that makes it mandatory for private companies to be an equal opportunity employer and research about the economic benefits of following inclusive policies. For example, a report by Accenture and not-for profit Disability: IN, "Getting to Equal: The Disability Inclusion Advantage," says inclusive companies outperformed others over four years and reported 28 per cent higher revenue, double the net income and 30 per cent higher profit margins. 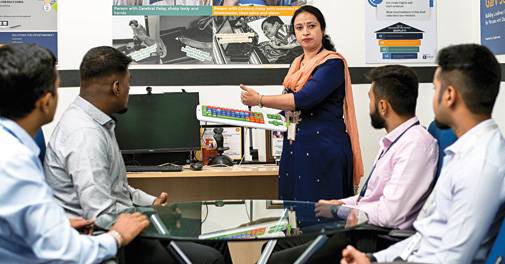 Allegis runs an employment centre 'Garv Se' at its Bengaluru office with NGO EnAble India to share its best practices on inclusion and help people with disability know about the different opportunities available.

The companies Business Today spoke to have seen huge benefits, both tangible and intangible, of hiring disabled people. RBS India said this made the company more innovative. Future Group got a new consumer base. Tata Steel's ability to attract talent went up. Allegis India's empathy quotient improved. Lemon Tree says the differently abled it has hired are 15 per cent more productive.

"I was scared of people with disability in the beginning, I am sure others were too. But as I learnt, I had to speak up and share the value I saw in inclusion," says Tatavarti of Allegis. He then started sensitising managers and mandated that they hire at least one person with disability in each department.

Venkataraman S.V., Managing Director, ANZ Bengaluru Service Centre, is responsible for driving the agenda at his company. "As a group, we were always big on inclusion. We started with financial inclusion and realised that our company, which has almost 7,000 people in Bengaluru, should be a reflection of the society it serves." While the focus on hiring employees with disability started in 2010, it ramped up the initiative in 2014. Now, it has 110 differently-abled employees.

Experts say the need of the hour is to make this a board agenda so that it impacts the company's overall practices. Shanti Raghavan, the founder of EnAble India, explains the importance of influencing CEOs. "The managers' impact is limited to their teams. If it becomes the focus of CEOs, it influences budgets, hiring policies, workplace culture and reduces barriers to inclusion." EnAble India has worked with 725 companies in 29 sectors to help them hire people with disability.

Hiring is not enough. One has to ensure that the message permeates all business processes and management practices. The first step is to map roles that can be given to the disabled. Tata Steel has identified 900 such roles out of 7,000 work profiles. For instance, visually impaired can join as recruiters or in sales and marketing. People with hearing impairment or mobility issues can be given paperwork- or data-related roles.

The next critical step is infrastructure. Atrayee S. Sanyal, Chief of Group HR and Chief Diversity Officer of Tata Steel, says it is important to go beyond the 'ramp mentality'. Companies, he says, have to look at the way lights are designed, ensure that the doors and corridors are wide enough for wheelchairs, and that toilets and guest houses are easily accessible. "Without the right infrastructure, retaining them will be difficult," she adds.

Venkataraman S.V. of ANZ says even a small investment in the right solutions can yield huge productivity benefits. He shares how, in the initial years, it took them a while to be convinced about buying motorised wheelchairs, but once they did, it had a multiplier effect on performance of people with limited mobility. Now, he says, they have bigger cabs that can accommodate wheelchairs and have hired people to help disabled employees get in and out of cars or during lunch hours. They also have a sign language interpreter during town halls and have created a dictionary of banking words in sign language so that the hearing and speech impaired staff can communicate well. 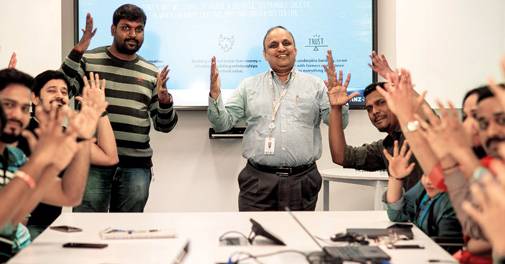 At ANZ Bengaluru, all town halls have a sign language interpreter to ensure meetings are inclusive. In fact, it has created a dictionary of banking words in sign language so that the hearing and speech impaired staff can communicate well.

Building infrastructure is easy. The more difficult part is getting acceptance from employees. The easy answer is training but Allegis used volunteering to give the workforce purpose and help them connect. "We started measuring the time we were spending in volunteering activities," says Tatavarti. It could be to help people with disablity build their resume, or teach them job skills, or assist them in conferences. He spends half an hour every week assessing the initiatives of the employee volunteering programme.

The journey doesn't end here. Once they are onboarded, companies have to give them time to catch up with others. Shashaank Awasthi, the co-founder of impact enterprise v-shesh, says people with disability face a lot of barriers at the beginning of their lives as neither our education system nor our city transport is inclusive. "They miss out on a lot of learning and communication skills. Companies have to give them more time, especially at the entry level, to come to speed, as the social system robbed them of that opportunity," he says. Allegis gives them additional six months to pick up job skills. ANZ depends on NGOs such as Enable India and v-shesh to bring them on a par with others. They all agree that once on the floor, no compromise is made on performance standards and work targets. This ensures that everybody feels valued as an equal partner.

The additional infrastructure and training are an additional cost. However, the benefits outweigh costs in the long run. "It is a successful business model for us," says R. Hari, General Manager, Human Resources, Lemon Tree Hotels, adding that in an industry where attrition is as high as 45 per cent, people with disability stay much longer (attrition is around 30 per cent). He adds their productivity is also 15 per cent higher. For instance, a carpenter is usually affected by noise pollution, but if the job is done by a hearing impaired person, it can be done much more efficiently.

Gopal Singaraju, COO, RBS India, says it is mutually beneficial as overall productivity of the company improves. He shares an instance of how they made the filing process paperless to help a woman who couldn't bend to sift through the files in cabinets. This helped the entire department, he says.

Hiring people with disability raises the bar for the entire company, says Devika Nair, Diversity and Inclusion & CSR Lead at Allegis India. "When you see a colleague who has one less faculty working with the same rigour, you start seeing challenges in a different way, and aspire to be better and not get bogged down by life or work." "My customers see me as a responsible firm that is making a difference to society and trust me more. This has increased customer traction." Tata Steel, says Sarkar, has found that inclusive practices help it during campus placements. "Young people are conscious about the values of the firm they join and we are getting a lot of pull from young talent during our campus recruitment drives," she says.

"Over 50 per cent of our stores have at least one person with disability. There is no target but the idea is to have one (disabled) employee per store. It is not a mandate but we have realised it makes sense," says Nayak of Future Retail. As a result, 150 Big Bazaar and FBB stores have seen 1,00,000 first-time disabled shoppers till date. One suggestion from employees with disability was to include people with neural disabilities such as down syndrome and autism who may have a heightened sense of touch, light and sound and observe a Quiet Hour once a week when the store would dim the lights, switch off the music and ensure less noise so that they can shop. At present, 38 stores are observing a quiet hour on Tuesday mornings. This has got the company 15,000 first-time shoppers within six months.

But in the times of cut-throat competition when everyone is rushing to chase targets, doesn't this slow down the pace? Tatavarti doesn't think so. It is a mindset issue, he says. "Our problem is that we focus too much on the difference," he says.