How Productive is Work From Home?

Companies are rediscovering what works and what doesn't
Sonal Khetarpal | Print Edition: May 31, 2020 Rajesh Rengasamy is learning farming from his father-in-law. They grow paddy, coconut and gram on their farm, a four-hour drive from Chennai. He is also a student of folk music. But that's not what his 'profession' is. He is Director of Technology at digital business transformation company Publicis Sapient.

For most, passion and career never meet. That was the case for Rengasamy also until he moved from Bangalore to his hometown in Chennai in 2014. "The two-three hours I save every day on commute is a gift. I can do a lot more work and still have time for things I love." It's evident. Rengasamy has got two promotions in the last five years and has delivered multi-million-dollar projects, all working from home.

Such cases have been far and few in corporate India. While new-age firms always had the option of work from home, most employees did not opt for it. It didn't seem 'normal' unless one had a personal situation to take care of. Often, there were things like being invisible to the boss and being left out.

But, Covid-19 changed all that. 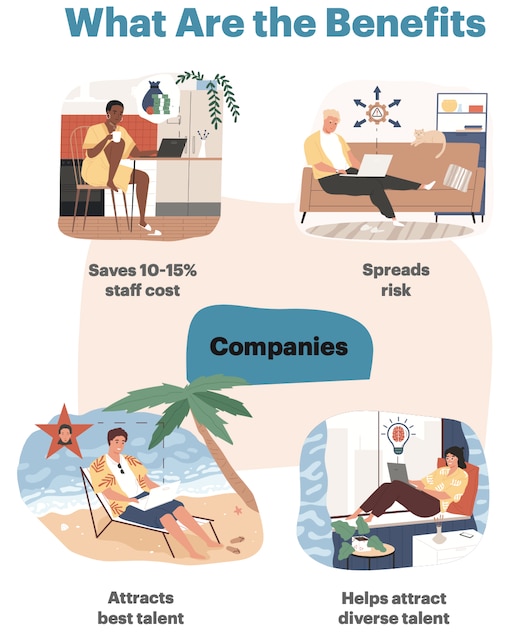 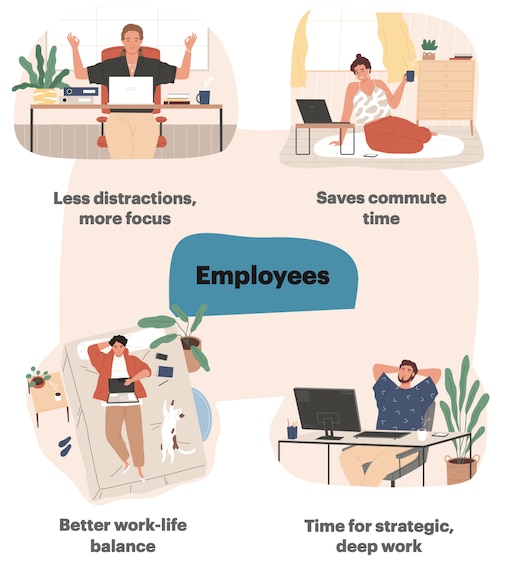 The lockdown forced companies, big and small, old and new, to get their employees to work from home. After a month of experimenting, companies are now using this crisis to see if it can be a long-term operating model. Indias largest IT company, Tata Consultancy Services (TCS), has been a bellwether for the trend. In a Q&A after fourth quarter earnings call, TCS announced it is working towards a model called 25/25 where only 25 per cent employees will work from office by 2025. "We don't believe we need more than 25 per cent of our workforce at our facilities to be 100 per cent productive," said N.G. Subramaniam, Chief Operating Officer, TCS. Each employee should spend only 25 per cent of his/her time in office, he added.

Many others are in the wait-and-watch mode. According to Kameshwari Rao, Group Vice-President, People Strategy at Publicis Sapient, many employees are realising it is working for them and asking if they can continue working from home. Mahalakshmi R., Director, Human Resources, Mondelez India, says it is for the first time that the frontline sales team is working from home. The company is now thinking if some order-taking can continue to happen over phones.

A lot of research has been done on where work from home works and where it doesn't. Studies have shown that fewer distractions and reduced commute time lead to more productivity. It is also known to improve employee retention and reduce stress.

But not everyone agrees. According to a recent study by American researcher Judith Olson, remote work is good for solo performances but not where work requires collaboration. Here is what India Inc. is finding out.

So, will companies continue the same remote work culture post-Covid? TCS has a clear answer. "We are not going to go back to where we were," said Chief Executive Officer and Managing Director Rajesh Gopinathan during the earnings call.

As firms develop their own frameworks, Mondelez India's Mahalakshmi says one has to keep some ground realities in mind: specifically availability of safe public transport and in the long term the colleagues' personal situation at home, as for some people it could put pressure on their personal life or their socio-economic situation might not be conducive for work from home. Similarly, there are roles that are suited for the work-from-home model, and there are those that aren't. Analytics, core research, data mining and drawing insights lend themselves more to the work-from-home model for a longer period as opposed to roles that require significant coordination, says Amitav Mukherji, Head of Corporate Human Resources, ITC Ltd. "Managerial roles that require influencing opinion, coordination among stakeholders, resolving conflict and inspiring teams require personal interaction, and can be done from home only for a limited time. Even for roles that require frequent meetings with customers or managing a production line or a warehouse, work from home is not an option," he adds.

At the organisational level, remote work is effective for IT services, data analytics, digital marketing, design, transaction processing, auditing and document reviewing. But it may not work for firms in manufacturing, commodities, agriculture, warehousing, facilities and hospitality.

The culture of work from home is in its nascent stage and managers and employees are still learning the ropes. A manager of a due-diligence firm told his team not to leave the room they work in during office hours. One of the team members took it literally and told the CEO how he has been following the instructions. Of course, the manager was reprimanded and the CEO took to task seniors on the remote team management.

No wonder many employees are complaining of longer working hours. Says a senior manager of a stainless steel firm: "Work from home is as much about working as it is about proving that you are working. The latter is an added burden. I would rather work from office."

To make the new model a success, the culture of the organisation has to facilitate remote work. "Mostly its about trust, respect and empathy," says Sohini Dutt, Regional HR Director, South Asia, RB Health. Organisations need to trust that employees will work and employees need to respect the same. Doing household chores does not make employees unprofessional as their personal situation might demand it. "Organisations will need to have these as part of their culture since the line between work hours and personal time at home is very thin," adds Dutt.

To bust the myth around work from home being unproductive, all CXOs, including the CEO, at Mondelez India worked from home once every week even before Covid-19 stuck. "We wanted to bust the taboo around remote work and had to put out a message that people may have different needs, and they should leverage it," says Mahalakshmi.

According to Rao of Publicis Sapient, one of the reasons for the seamless transition to 100 per cent work from home was that the company always hired people who were organised and would not need a big brother to watch over them. "The orientation of the firm is to keep the focus on the impact that is created rather than the effort, and even performance assessment is oriented to growth and learning. It helps build accountability and ownership in people." So, despite working from multiple locations instead of the usual four, there has been a 10-20 per cent increase in productivity at the organisational level, says Rao. One of the reasons is that 90 per cent of employees are software engineers and IT work is location-agnostic.

Also, organisations will need to change the way they look at work. "Work will move away from planning around workforce to planning around outcomes and making it more structured, with scope for more specialists than generalists," says Rajkamal Vempati, HR head, Axis Bank. With more colleagues working remotely, leadership too will have to change, adds Vempati. They will have to learn to inspire and enable people in the new environment. Social interactions foster creativity, sharing of ideas and emotions, so "organisations will have to figure out ways to curate physical and digital human interactions in getting the team to foster team spirit and social capital," she says.

The Coming of Age of Technology

A strong technology backbone is needed to enable high-impact work from home. So, when Rengasamy started working from home in 2014, internet connectivity was an issue. But over time, better networks, use of tech platforms, including Skype, for messages and calls, and latest gizmos have improved the situation. Rengasamy now has a high-quality speaker phone, a drawing tablet and a web camera. "The amount I saved on commute was invested in high-end gadgets," he says. But many still believe that technology can never replace the advantages of human interactions. So, what could have been solved in a minute by talking to someone face-to-face in office, often requires a lot more time and effort when everyone is working remotely. But, todays tools such as whiteboard and document sharing allow almost real-life experience of collaboration.

In fact, as TCS moved 90 per cent of its 4,48,000 employees post-lockdown to work remotely, its CEO Gopinathan says they are already "seeing increased levels of productivity in certain instances and an increased level of engagement." This has been possible because of their investments in the past years inSecure Borderless Work Spaces (SBWS)- an operating model that allows TCS associates working from home ensure business continuity with support from minimal associates in offices. Working in a distributed model is not about moving the person out of office and connecting a laptop or a desktop from home. It is much more than that, says Gopinathan. "It is about taking the entire elements of the operating model and being able to deploy that into this kind of an extended environment."

P.C. Mustafa, Co-Founder of packaged food company iD Fresh Foods, started using Zoom post-lockdown. "I don't feel I am missing out on anything. If I am able to manage idli operations from home, then anybody can do it," he says. Around 20 per cent of his time used to be spent on travel to the four regions the firm operates in. Mustafa now plans to leverage more video-conferencing tools and reduce his travel.

When Shailja Dutt, founder of Delhi-based executive search firm Stellar Search, decided to operate out of Singapore, there were initial hesitations. "I had never left my firm in the care of anyone else and didn't know how much I should depend on whom and for what," says Dutt. But, over the next few months, she saw her colleagues stepping up. "One mistake entrepreneurs make is that they think they are indispensable to the firm. But when I saw the team was working better even when I was not there, I realised the only one who thinks I am indispensable is me."

Working remotely, she says, has helped her become a better leader and mentor. It has allowed her to choose how she wants to invest her time - whether she wants to get new business, or focus on long-term strategy. "A lot of my self-development as a leader has happened in this period because I have a lot more time to read, coach and mentor." It also helped the organisation set up strong systems and processes in place which are automated and do not depend only on her for clearances.

The obvious one is reduced cost on office space and infrastructure. Firms that allow employees in certain functions to work from home can save 15-20 per cent of staff cost (including salary, employee benefits etc), says Sasmita Mohanty, CHRO (South Asia), Bollore International Logistics, a French conglomerate. "It will not be the case that, for the same job role, we will be paying the same salary to those who are working from home and those who are coming to office. There will be a difference because we are giving a comfort level to the person who is not coming to office."

Working from home also allows organisations access a diverse pool of talent, which has a positive impact on revenue and innovation. "As companies get used to the idea of working from home, they will become open to employing gig workers who can contribute from anywhere. Working from home could also help include more women into the workforce," says Anupam Trehan, Director, People & Communities, Cisco India and SAARC.

The geographically spread workplaces can also aid economic growth. For example, if the Indian IT sector, which employs over 4.5 million, was dispersed rather than concentrated in certain hubs, it would not just reduce pressure on city infrastructure, but also lead to more balanced growth in the country. A distributed workforce will make cities more liveable and sustainable, feels Trehan.

One thing is clear though. Work from home is here to stay, in a bigger and longer form.