Our pick of the best travel, fashion, gaming and luxury apps

Here's our pick of the best travel, fashion, gaming and luxury apps as millions of apps fight for space on our handheld devices.

Steve Jobs wasn't Martin Luther, but in a post-modern sense, reformed the world in much the same way. In his reign as CEO of Apple Inc, smartphones went from being a lifestyle choice to a must-have. Sometimes set in suede-like silver metal and sometimes panelled in mirror, the designer goodies that make up the iParade were upped a notch when Apple launched its app store to download music and gaming applications in 2003. In a few years, brands began to come up with innovative apps and advertised their benefits through Apple's fast growing network. Following suit, Google developed its own mobile platform-Android-and launched a rival software store, the Android Market in 2008. This was further followed by Research in Motion's Blackberry App World in 2009, which also put a recreational spin on a telecom service that had, until then, restricted itself to push email. Then came the downside. The stores were so successful, finding the right app became nearly impossible. Here's the best of the best in four important categories.

WAYFARER'S WISH LIST
The cautious tourist of the 90s have to some extent been replaced by a new age of vagabonds who consider 'tourism' a cuss word and the journey a reward. Justifying this trend are many apps that centre on flight status, currency conversion, local eating and street culture, art and architecture, and of course photography. Those who wish to take a safe route can hop on board highly rated apps such as Lonely Planet city guides, National Geographic Adventure manuals and the North Face Trails. 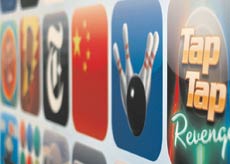 Manage your applications by saving them in folders by category, and exit once you are done using them. This frees up memory on your device.
Apple myLanguage Translator Pro
When in Rome, speak like the Romans and not like the Roman tour guide. This crowd-sourced language translation tool offers community-supported translations by native speakers and assists with pronunciations. The Pro version includes Urdu and Latin, taking the total number of languages to 59. That's the most in the iTunes App Store. Price for pro version: $4.99. Seller myLanguage, Inc.

Android Frugal Flyer HD: Airline Hotel
This allows you get the best deals on airfare and hotel and car rentals in and around 40,000 cities. With more than 700 airlines, over 100 car rental services and almost all big hotel chains registered, this app helps you nail the best deal. What's more, it saves you last minute rushes by storing boarding pass copies and passport photos.
Price Free. Developer Webport.com The WhatsApp messenger is compatible with all major platforms and allows you to chat and share data across networks
iAM GAME
There's more to gaming than smashing a bunch of angry birds into green pigs. Now, you can relive the classics of your youth such as Prince of Persia, chase Pac Man, align falling bricks and assert your need for speed. The newer ones on the other hand draw on technologies of 3D and motion sensing. Be it interactive fitness games, mindless stress busters, crosswords and trivia games, or just motion pictures and cartoons turned into games, there's something for everyone's need and greed.

OUR PICKS
Apple Crystal Maze
Transport yourself to the awe-inspiring and spooky studio of the hit 90s game show hosted by Richard O' Brien. The sounds and quotes from the show put you in the mood as you snake your way through the Medieval, Aztec, Futuristic and Industrial mazes, collecting crystals before your time runs out.
Price $0.99. Developer Dynamo Games

Android Top Hacker HD
'Your mind makes it real.' This quote from The Matrix may have inspired this abstract math game. It is set in 2034 AD when the alien Kliktin Federation has hacked into a system which controls all computers and also the human brain. Hackers Masaku and Hatami set out to save the world and counter the sinister plot by cracking multiple digital codes.
Price $1.61 Developer Interactive
Exchange Company PL

Blackberry Training with Messi
Owing to his smashing strikes, Barca boy Lionel Messi has been referred to as the true successor to Argentine legend Diego Maradona. The official Messi video game allows you to train your kicks and passes with Leo. It is developed in collaboration with the Lionel Messi Foundation and Social Organisation Team, which donates all proceeds to charity.
Price $1.99
Developer Fundacion Leo Messi

TURNING 'FASHIST'
Fashion evokes multiple metaphors; there's snobbery on ramps, defiance in groups and nonchalance on streets. Whatever be your style, there's an app to make you get it right. While online stores have come up with apps like Net-A-Porter, Marks & Spencer and H&M to make shopping simple, the ones created by big labels like Gucci, Armani and D&G keep you abreast with their latest collections and save you the trouble of flipping endlessly through portals. There's a Style Studio for tips on mixand-matching and avoiding faux pas and a Wardrobe Manager that helps you organise your buys.

OUR PICKS
Android Street Fashion Gallery Street style is the easiest to adapt and can be easily deconstructed to your taste. Leopard print pumps from Milan or hot pink overcoats from New York, short check skirts from Japan or kiltstyled pants from Scotland; get the latest popular fashion updates on street fashion from catwalks around the world.
Price Free. Developer Tattoos

Blackberry TrendStop Fashion TrendTracker
Track the fast evolving world of couture with over 80 videos from global fashion weeks which are available within 24 hours of the actual live show. There's also a constantly updatable collection of more than 3,500 images from ramp shows. Once you've decided on your favourite styles, use the in-built store locater to find the stuff in your city.
Price Free. Developer Amoja Limited

Apple Touch Closet
At times sexy and at others casual, closets should hold enough to fit your many moods. This app helps you organise your clothes by storing them as images in an album and helps you pair them with items you're shopping for. A great way to steer clear of fashion faux pas and repetitive buying. You can also put your favourite clothes in one stack, predecide ensembles for special occasions and prepare a checklist before a vacation or a business trip. A complete wardrobe must-have.
Price $9.99. Developer Bay Dynamics, Inc.

LAP OF LUXURY
When smartphones and iPhones were getting increasingly common, connoisseurs, aficionados and the like found a novel way to keep their exclusivity going. There are apps crafted especially for the crme de la crme, be it collectors of vintage wines, cigars, couture watches, jewellery or luxury cars and bikes. You can also check into luxury resorts and even get updates on the latest auctions.

OUR PICKS
Android Swiss Watches Book
Your window to the most coveted and creative timepieces from the world's watch haven. The collection boasts of the latest models from Rado, Chopard, Bell&Ross, Raymond Weil, Piaget and several others. All you have to do is click to enlarge a model on the screen. Then you'll notice the movements of the hands along with the features and the price. Wrist assured, we say.
Price Free.
Developer 2K-Group

Apple Pair it
With over 20,000 easy to follow timetested wine and food pairing suggestions, the app is your pocket sommelier. You can swirl the device to select a random pairing suggestion, receive advice from experts and browse the wine library with over 180 varietals from around the world.
Price $4.99.
Developer Pair it! LLC

Blackberry Habanos Club
'Cutting, rolling, lighting and much more', that's what this digital humidor is all about. Besides access to constantly updated brand catalogues from Habanos, there's an encyclopaedia of cigars and videos on cigar cultivation. The Cigar search helps you find a stogie that meets your criteria of brand, size, length and ring.
Price Free.
Developer Phoenicia T.A.A Cyprus Ltd.