Audi's new car Q3
Let's dive straight in. The Q3 is Audi's smallest crossover yet. With it, the company hopes to take on the BMW X1. As looks go, it isn't as alluring as the Q5 and the Q7. It's bloated around the front and slightly bulbous at the rear. However Audi has done well with the finer details, especially the head and tail lights. Based on the 2007 Cross Coupe concept, the front grille and headlights are trademark Audi. And while the Q3 is shorter and narrower than the Q5, the wraparound tailgate tends to compensate by adding road presence. Compared to BMW's X1, which is 69mm longer, the Q3 is wider and taller.

Inside, Audi has done well to create space despite limited dimensions. Just like the Q5, the Q3 comfortably seats five adults and at 460 liters, has 40 liters more bootspace than the X1. The Q3 comes with two 2-liter engine options - a TDI and a TFSI. Both come with an energy recuperation system that uses an alternator to generate electricity when the car is braking or coasting.

The diesel engine, with a max output of 177bhp, is also surprisingly light at just 154kg. It uses common rail direct injection with the fuel pressurised at up to 1800 bar. Eight port nozzles deliver the fuel to the engine upto six times a combustion cycle. The engine is also turbo-charged using a variable geometry turbine. What does this mean for fuel efficiency? The Q3 delivers a very respectable 17 km/liter.

Inside, the Q3 deviates from its bigger stable mates.
For the transmission, Audi has fitted in a 7-speed DSG unit. In addition to earlier developments, the Q3's S-tronic gearbox now disengages the clutch when coasting in each and every gear. This makes the car free-wheel, further boosting fuel efficiency. In fact, it's worth spending some time on just how much Audi has focused on this. The goal, it appears, was not only fuel efficiency but also getting maximum power out of each engine. To start with, there are changes to the Audi Drive Select program. In addition to Comfort, Auto and Dynamic modes, you can also choose 'Efficiency mode'. This makes the most of every drop of fuel.

If that isn't enough, an onboard computer regularly gives you tips for efficient driving. This includes a gear-shift indicator for the manual version. The system also tells the driver where fuel is being consumed. This way you can know exactly how much power something like your AC unit is using, and how that will impact fuel efficiency. 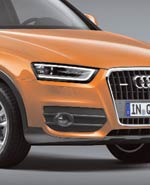 A big factor in its success be may be Audi's focus on efficiency.
About the drive next. Although there is perceptible body roll, the car is easy to drive and the ride quality is good. Both engines are flawless, offering good pick up and range. In addition, the low drag coefficient at 0.32 and lowered lift at the axles help the car maintain good traction. The electro-mechanically assisted steering is quite light and though some may complain about lack of feedback, it's perfectly suited for Indian traffic.

The interior, however, throws a bit of a surprise. To start with, it is quite different from regular Audis. The MMi system has moved from the central floor console to the vertical console and the display now pops out from the top of the dashboard. The steering wheel is all new and so are the knobs for temperature control. Although these are far more ergonomic, they deviate from the rest of the Audi family.

The Q3 is smaller than its cousins but it doesn't compromise on space.
That's perhaps where Audi missed the trick that BMW didn't. On the inside, the X1 stayed faithful to the BMW design philosophy. In the Q3, despite acceptable workmanship and materials, there is a noticeable individualistic streak. For a company that sets high quality benchmarks, Audi's latest crossover has been put together with little thought to legacy.

To sum up, the Q3 is a neat little crossover that could enhance Audi's spread and appeal greatly in India. The vehicle itself is small on the outside but quite spacious inside. It certainly has road presence, something Indians will love -and something the BMW X1 does not have. That's thanks to the Q3's greater width and height. It also takes a big step forward in efficiency with a host of technical and assistance systems. These make the car fuel-friendly despite the engine size. In its Quattro avatar the car will be primarily a frontwheel-drive with torque being sent to the rear wheels, when needed. If Audi can get the pricing right for this debutant, then it has the makings of a great success story in India. Expect it to hit Indian roads early next year, after it debuts at the Auto Expo.