In a few months from now, there will be a million tourists in Beijing watching the Olympic Games. Beat the rush and head to this ancient city now.

There is much more to see in and around Beijing than just the Great Wall. We went there and spent a fortnight travelling around Beijing to tell you exactly what you can do and see while in the Red capital.

The Great Wall at Badaling 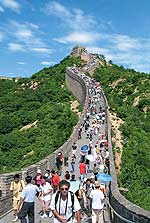 The Great Wall of China
The Great Wall, as everyone knows, is one of the few manmade structures visible from space. From Beijing, it’s a 2-3 hour drive to the nearest portions of the Great Wall. But it’s the Badaling part of the wall that’s most popular. This is a fully-restored section and long enough to make you feel that you may actually end up in Mongolia.

From the entrance to the tallest point takes about 2 hours (one way), unless you’re some kind of an Olympic athlete. Take the Badaling trip as it is well managed and safe. Climbing the Great Wall is hard work. Some sections have steps and railings, while others are just gradual steep slopes. Be prepared for extreme temperatures. If you go in summer, you will be fried by the sun and in winter, you will encounter biting winds, extreme sub-zero temperatures, snow and ice.

We took this trip on an icy February afternoon and survived to tell the tale. It is worth taking the trip, walking a few steps and knowing you can say you’ve stood on one of the wonders of the world. 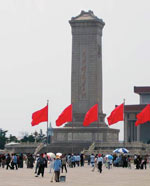 This is a huge open space surrounded on all sides by imposing official buildings. Apart from being a popular gathering place for tourists, it is still often used for big celebrations and for government leaders to address the people. This is also the place where the infamous “Tiananmen Square Massacre” took place two decades ago. You can visit the square for free till 10.30 p.m. If you go during the day, you can buy a ticket to go up to the balcony from which Chinese leaders address the people. The atmosphere at night is different and the square is beautifully lit. But don’t arrive too late since at 10.30 p.m., the soldiers come and clear out the whole place in minutes.

The breathtaking Ming Tombs
Barely 50 km northwest from Beijing en route to the Great Wall, lie the Ming Tombs—the mausoleums of 13 emperors of the Ming Dynasty (1368-1644 AD). The mausoleums have been perfectly preserved. Only the Changling and Dingling tombs are open to the public. Changling, the main Ming Tomb, is the largest and is well preserved. Take our advice and visit the Lingsi Palace next to it. This is one of the few palaces in the world made of camphor wood. The ceiling is colourfully painted and supported by 16 solid camphor posts. The floor is decorated with gold bricks.

The Dingling tomb is underground and about 27 metres deep. It is the mausoleum of Emperor Zhu Yijun, the 13th emperor who occupied the throne the longest during the Ming Dynasty, and his two empresses. The main features here are the Stone Bridge, Soul Tower, Baocheng and the Underground Palace.

The entrance to the Forbidden City
Lying at the centre of Beijing, the Forbidden City, called Gu Gong in Chinese, was the imperial palace during the Ming and Qing dynasties. Now known as the Palace Museum, it can be reached by walking to the northern end of the Tiananmen Square. This is the world’s largest palace complex and covers 74 hectares. Surrounded by a six-metre-deep moat and a 10-metrehigh wall are 9,999 buildings. Until 1924, when the last emperor of China was driven out from the Inner Court, 14 emperors of the Ming dynasty and 10 emperors of the Qing dynasty had reigned from here. Since yellow was the symbol of the royal family, it is the dominant colour in the Forbidden City. Roofs are built with yellow glazed tiles; decorations in the palace are painted yellow; even the bricks on the ground are made yellow by a special process.

The Summer Palace
It is located next to the Beijing University. Constructed as a place of recreation for the emperor, it is now open as a public park and is one of the most impressive places to visit in Beijing. The main attraction is a huge lake with a walkway circling it. Towards the end of the walkway, are a series of towers, halls and temples climbing the hillside. From the buildings at the top of the hill you can see the entire lake and its surroundings.

The Temple of Heaven 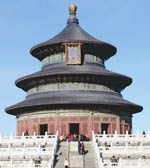 The Temple of Heaven
The Temple of Heaven is a large park laid out around the temple complex. Its centerpiece is a large tower built entirely of wood, apparently without using a single nail. The park attracts local residents by the thousands each day; they come to practice singing, martial arts, Peking opera, chess, dancing and calligraphy. Of course, this can be said of many parks in Beijing, but the Temple of Heaven attracts more than its fair share of visitors. One of the separately ticketed items here is the echo wall. It is a smooth wall built in an almost complete circle. It is said that if you stand next to the wall and talk at it, the words are carried along the wall and can be heard from any point. 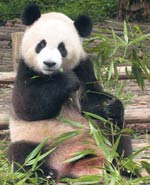 A giant panda in Beijing Zoo
Beijing Zoo is famous for its large selection of pandas. But it has an amazing collection of exotic animals as well. The zoo is located at the north west of Beijing not too far from the centre. Watch the polar bear, furry camels, the huge black bear and Royal Bengal Tigers— all in open enclosures. The beautiful lake that runs through the zoo is frozen till March but still attracts a lot of birds. Through the year, this is a great place to sit and relax and watch birds from around the world chirping away.

Nightlife: If you are interested in checking out how locals live it up in this city, head to the Sanlitun Entertainment Area after dark. The streets here are lined with dozens of bars and pubs with live music and great food. They are open till 4 a.m. Affluent Chinese, expats as well as tourists flock here. Try out trendy pubs like Poachers, The Tree, Vogue or Boys & Girls while you are here.

Shopping: The most famous shopping area in Beijing is Wangfujing street. One of the malls here—the Oriental Plaza— is one of the biggest in Asia. It stretches for a few city blocks and has two subway stations on either side. You can buy everything from souvenirs to branded designer wear here. It takes about 20 minutes to walk the length, if you are a quick walker. There are many large, traditional department stores, souvenir stores, and a small street with Chinese food stalls here as well.

Silk Street: The Xiu Shui market is known simply as Silk Street. You can enjoy shopping for a wealth of traditional Chinese knick-knacks to bring home for your family. If you don’t have too much time for shopping in Beijing, this could be the only place you need to visit. Things you can buy here include Chinese souvenirs and carpets, silks by the roll, Chinese paintings and many other things.