Cape town is about shark tales and fresh city

Shark tales and fresh fish; the city should issue a 'danger of getting hooked' warning.

West Cape with the beaches at Clifton, the restaurants at Camps Bay and a backdrop of the Twelve Apostles mountain range
I'm dismayed to discover that my highest pitch of excitement, finds expression in high pitch. The triangular fin is cutting straight across the clear blue water. Da-duh, da-duh, da-duh, da-duh, DUM, DUM. There it is, my first great white shark, Jaws in the flesh. And instead of the resonant, full-throated response this should have elicited, I shriek, sharply.

The squeals keep coming, shriller still when another circles close. I'm trying to pass them off as modulated echo-locating calls to my fellow spotters though I think they can hear through that farce. With a deep breath, I manage to position my idiot-proof, point and shoot camera at the shark directly beneath the boat, barely five feet away. And hit the off button. 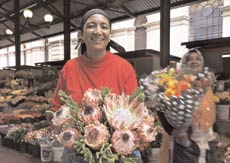 The Protea, an emblem of South Africa, may be the fiercest flower in the world
That is when I acknowledge that certain experiences are bigger than me, after which I can watch the humpbacked whales off the coast of Gansbaai, without blowing a hole. Though one of the whales does, breaching the waves with its knobby, crusted head and expelling water almost 20 feet into the air. That gets another shriek.

Cape Town all told, is an experience bigger than me, one I cannot contain, that periodically pushes squeaks and sighs, a whole range of personal acoustics past my lips. On the flight from Johannesburg, our captain is clearly a Capetonian. He showboats, tilting the wings first to one side then the other so that passengers on either side of the aisle get an eyeful of the surreal aerial view; every hue of blue in the water, every gradation of green on the land. That first involuntary whoosh of awe as we dipped set the tone for the rest of the trip.

The city is a revelation. Less than two decades removed from the apartheid regime, a marvel of infrastructure with one of the cleanest water supplies in the world. The highways are smooth and fast and what passes for a traffic jam here would be a Delhi driver's dream. The homes that dot the soft slopes are quintessential Cape Dutch, with gabled faces and reed thatched roofs. The bohemian heart is at Long Street, that has delicately wrought cast iron balconies where backpackers swig beers and vie for a view of the beautiful people beneath.

The Victoria and Albert Waterfront could have turned into a tourist trap but the working waterfront redeems it
The triumvirate of Table Mountain, Lion's Head and Signal Hill preside majestically over this sloped city centre that topples headlong into the bluest of seas. The poet Firdaus' lines could well be transplanted from Kashmir; "If there is paradise on earth, it is here."

The parallel to Kashmir is more apposite than it need be. Every door and window in Cape Town is grilled, and signs advertise quick-response security systems. Low concrete barriers on the N2 route shield the unending rows of corrugated tin roofs of the Guguletu and Khayelitsha townships, where the much toted potable water supply is often cut off.

The newspapers while I'm there are full of the African National Congress Youth League leader Julius Malema. He's been handed down a ruling that declares the song Dubul' ibhunu - Shoot the Boer - constitutes hate speech and is illegal and unconstitutional. Malema, loud and unapologetic, more Shaka than Mandela, contests that the verdict is a part of a systematic attempt to erase the brutal history of apartheid. Scratch the surface of the pristine blues and greens and there is still a mix of black and white and coloured. Greenmarket Square at the heart of City Centre is always bustling
The first evening at the hotel on the Victoria & Albert waterfront, I meet a fellow guest who has spent the day in his room, concerned for his safety. It's a crime that serves as its own sentence. The waterfront is glorious. Trawlers and tugboats are docked in the working harbour and the anchored oak and white yachts perfectly offset the pastels of the Queen Anne buildings. The springtime sun is lemon yellow, cream lilies with fat orange stamens bloom wild in ditches, and the fynbos, indigenous shrub cover, has stippled the hills a glorious purple. The water snatches every passing ray of light, glinting like Tanzanite, the deep indigo stone that is rarer than African diamonds. To keep to the confines of a hotel is to be condemned to monotone, when such a spectrum lies just beyond.

Nobody here feigns ignorance about Cape Town's rough neighbourhoods, though is a city even complete without them? The basic cautions, applicable everywhere, will steer travellers clear of incidents and accidents. But do be wary, the sneaky sunsets over the marina will rob you of your breath, every time.

The waterfront is also home to half a hundred restaurants, each of which have matre d's that cry their wares like fishwives. My newfound vocal vocabulary too gets truly unfettered at meals. The crayfish which did so well in the water before Sevruga ruthlessly drowned it in butter gets a groan, that must be stifled since Sevruga is a family-friendly establishment. At breakfast, I cheer wildly, loudly for the Springboks, the South African national rugby team playing the World Cup while slurping oysters. At dinner I chew greedily, loudly at springbok, the gracious South African gazelle, after I'm done slurping oysters. I become quite an authority on Capetonian oysters: leaner, meaner West Coast, smoother, sweeter East Coast, rather like rap, actually.

The flavour of the oyster mimics the savour of the shoreline. Camps Bay and Llandudno to the west are all scenester bars and Michelin stars, hip and edgy while Simon's Town and Kalk Bay are mellow, with perfectly preserved colonial homes, mom and pop shops and the finest Snoek fish this side of anywhere. 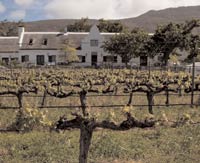 A Cape Dutch house set in a wine estate in Stellenbosch
With miles of coast and plenitude of marine life, it's unsurprising that sushi is a favourite food here with plenty of wine to wash it down. I am thankfully adept enough with my chopsticks that the rice muffles any embarrassments of appreciation.

Boerewors sausages, potjeikos stews, pap porridge and braai, the South African barbeque staples, are hard to find in restaurants, but Spanish, Italian and Greek are abundant, because of the similarity of the Mediterranean climes. Capetowns pick-a-mix proclivity may have been foretold by the two oceans that lap each edge of the peninsular coastline. The severe sapphire Atlantic with a bitter Benguela current from the South Pole meets the tepid turquoise Indian Ocean with its tropical Agulhas wave. The Mother City as it is called, adopts without prejudice from either side of the orient/occident divide.

Long Street's cafes and bars have an all day and night vibe
One bit it borrowed from India is of course, the Gandhian nonviolent stance till the 1960s. I'm not much one for packaged history, but the tour of Robben Island where Mandela was imprisoned is obligatory. Predictably, groups are hustled off the ferry, hoarded onto buses, trundled through the cell blocks, accompanied by a sonorous recitation of past hardships by an ex-political prisoner. Isolation and imprisonment hang heavy in the air and the colony of jackass penguins for whom the island is home, reflect upon them sombrely. I watch over 300 confer in their immaculate black tie, and yes, they fetch forth a knee-jerk gasping giggle. 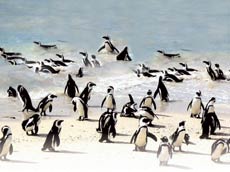 After weighty deliberations, Penguins take time out to play on Robbens Island
Before a place, comes a preconception. Every traveller packs a few to take with them on the road. And with most destinations, those notions get discarded, like so much litter, along the way. But Cape Town is a hoarder's haven, its landscape matched only by its sprit, its history with its grace. Amid its incongruities, inequities and incredible diversity I arrive at my own insights.

And a soundtrack that probably shouldn't be recorded.