The new Porsche Boxster S retains the classic silhouette but has exciting new technology under the hood.

The new Porsche Boxster S
Yogendra Pratap
Silence permeates the edges of the Black Forest. The narrow grey road surface reflects whatever little light has crept in from the afternoon sun. I have been waiting patiently for the cars ahead to drive off and give me a clear stretch. I blip the throttle and the forest comes to life as a finely-tuned flat six reverberates through the wooded hills. These are some of the best driving roads in Germany. And I'm about to test them with a true driving icon.

When Porsche launched a mid-engine Roadster in 1996, little did it realise the car would be its best-selling model until the Cayenne SUV came along. By then the Boxster - named for its Boxer engine and roadster body style - was into its second generation and had already established itself not just as an entry-level Porsche but as a fun-to-drive, iconic sports car. 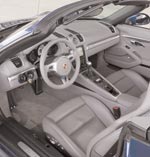 The interiors are well laid out and more spacious than the car's ancestors
Now, Porsches, no matter when they were made, bear an instantly recognisable silhouette. The old Boxster looked great but the update is more muscular. Even though the back does look Peugeot-ish from some angles, the rear spoiler blending into the LED taillights is a masterstroke. The doors are more sculpted and the air intakes more pronounced. The standard alloys are larger (19 inches on the Boxster S), while the wheelbase is 6 cms longer. That said, it is just 3cm longer overall. That means shorter overhangs for a sportier look. There's more space in the cabin as well. 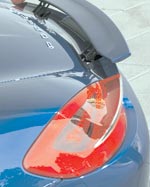 The new taillamp design blends beautifully into the rear spoiler
Thanks to its mid-engine, and a space-saving, fully electrically-operat-ed fabric hood, the Boxster comfortably fits 150 litres of cargo under the bonnet and another 130 litres in the boot. That brings us to the guttural flat six. The S-version gets an extra 0.7 litres of displacement over the standard 2.7 litre engine. The 311 bhp this creates pushes the car to 100 kmph in just five seconds. A lighter body, longer wheelbase, wider track and advanced technology, which includes the Porsche Torque Vectoring (PTV) system and lockable rear differential, combine to give you a truly impressive car.

So what do those specs translate to on the road? I'm about to find out on a 100 kilometre drive through the Black Forest. The car is well balanced- 'sweet' is the word - and eager to turn. The new electro-mechanical steering offers plenty of feel and the engine is sublime in both power and sound. While the Boxster was meant to be an entrylevel Porsche, this car can hold its own in any league. The windy roads here proved how agile and responsive it can be. I recommend the paddle shifter on the 7-speed PDK (automatic double clutch gearbox). It's not only quick but even blips the throttle on downshifts.

As I push the Boxster through corners, the G-force meter dances away on the instrument panel; I christen it the Black Forest Waltz. I am completely convinced that this Porsche's steering is perhaps among the best in terms of feel and feedback. The ride, though, leaves much to be desired because the car is set up to go hard, fast and flat. 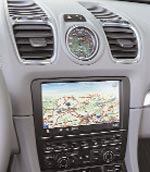 After an hour of screeching tyres and burning rubber, we hit a straight stretch where I decide to take it easy. As soon as I ease off, I notice the engine rev counter drops to 'idle'. I'm still in seventh gear. This shouldn't be the case. What Porsche has done is something cabbies in India have been doing for ages to save fuel. They 'turn off' the engine while coasting.

In the Porsche, if the driver brakes, the 7-speed PDK gearbox quickly downshifts as engine braking conserves fuel and electricity regenerating techniques kick in. The crucial difference is safety. In an emergency, the Indian cabbie would have no engine power. In the Porsche, you only need to tap the accelerator and the gearbox reengages the engine to match the car's speed. In the calm of the cabin, I see that the interiors have also been beautifully upgraded. Influenced by both the Panamera and the new 911, they boast a design that adds freshness. It certainly feels more spacious.

Clearly then, the Boxster S retains the best characteristics of its worthy predecessor. But it pushes the envelope in terms of what a two-seat sports car can achieve. It packs in more than enough to appeal to a driving enthusiast. In fact, it raises a very good question: has its arrival signified the birth of another automotive icon from the factory in Stuttgart.