Hot cars that are going to hit Indian roads in 2012

Luxury and supercar manufacturers have a number of vehicles lined up to wow the Indian market in 2012. Here's a quick list of the most hotly-anticipated cars revving up to get here.

Ferrari 458 Spider
Rahul Ghosh/Rachit Hirani
FERRARI 458 SPIDER
Ferrari rocked the supercar world with the the 458 and now comes the Spider. This car features a light-weight aluminium top that folds down into the engine bay in just 14 seconds. Amazingly, this movement does not affect drivability or aerodynamics. Also, where most convertibles don't encourage much conversation while driving, the Spider's passengers can hear each other quite clearly even at 200 kmph, thanks to improved aerodynamics. Powering the 458 is a 4.5-litre V8 engine with 562bhp that pushes the car to 320 kmph. As far as performance goes, the 458 Spider's 4.5 litre engine generates a massive 56 bhp. That's enough to take this beauty to 320 kmph which puts it at par with Formula 1 speeds.

MUST SEE: Most Talked About Cars 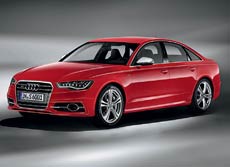 AUDI S6
When you read the words "electronicallygoverned speed" you know you have a powerful machine in your hands. The S6 is basically the old Audi A6 on steroids. This performance car has a brand new 4.0 litre engine that kicks out 420 bhp. This sends the S6 from 0-100 kmph in just 4.8 seconds. Its top speed - electronically governed, as we mentioned - is 250 kmph. Of course Audi remembers that it's in the business of making executive cars, not road demons. And it doesn't disappoint, with the driver aids and comfort getting top priority. Recaro bucket seats and night vision assist are optional but four-zone climate control and one-touch driver settings are standard.

BMW 1-SERIES
Speaking of affordable luxury, BMW has decided to bring to India its smallest-andcheapest car yet. This is direct competition to the Audi A3. The 1-Series hatchback is just over 4 metres long. To keep costs down, it will likely feature the same 2.0 litre diesel and petrol engines currently found on other BMW models. This block creates more than enough power for a lengthy drive down a highway. Inside, the 1-Series comes with all the bells and whistles you'd imagine such as bluetooth and audio controls on the steering and dedicated AC controls for the rear.

MINI COUNTRYMAN
The Countryman is the SUV version of the Mini. Since it shares several parts with the BMW X1, chances are it may be assembled in India. Unlike most SUV/hatches, the Countryman seats just four since a central tunnel divides the rear seats. Then again, no one buys a MINI to cart a football team around. Handily the tunnel doubles up as storage. While BMW will launch the complete MINI range, the one we're interested in is the S version. This packs a 1.6-litre petrol with 184 bhp. The SD version will come with a 143 bhp diesel. An allwheel drive version is also expected.

MERCEDES B-CLASS
This 'compact sports tourer' shares the same engine and suspension with the Mercedes A-class, but is a little bigger. The vehicle itself is at least six years old. However, in 2012 the German carmaker will send its latest variant to Indian shores. The new B-class has a number of high-tech safety features. These include crash-responsive emergency lights, rainsensing wipers, front and rear disc brakes, blind spot assistance and lane assistance. Amazingly, the designers have been able to create about 17 per cent more space on the inside than the older model.