Apple iPhone 3G
Apple iPhone 3G
You can hate Steve Jobs and his black turtlenecks and every Apple product ever made. But you can’t deny that the iPhone is beautiful. To find the iPhone unpretty is like saying Gisele Bundchen isn’t actually that hot. Yes she is. And you know it. That said, the iPhone 3G is ridiculously expensive and Indian networks suck. And the really cool apps are far too expensive. And the iPhone is a locked development platform— that is, only Apple can approve the applications that can be installed onto the phone. And even with supermodels, good looks aren’t everything if there is nothing up there.

Unfortunately, the iPhone 3G is a bit like Carla Bruni— fantastically hot, though not exactly ‘new’; very capable and multi-talented; and desired by rich, powerful men. It is just that you’ll end up seeing the rich, fat, old guy sitting next to you on a plane using one.

So, it stops being Bruni and becomes Anna Nicole Smith. Maybe Steve Jobs should have an iCode—you can’t use an Apple product unless you follow the following fashion code. The world might be a better place.

+ The touch screen works and it is just so beautiful.
- Big, fat, rich politicians will have one. Ugh!
Price: Rs 36,000 (Airtel and Vodafone) 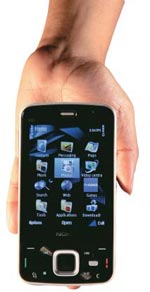 Nokia N96
Nokia N96
Ok, so you can’t touch it and feel it up every time you want your kicks. But how can you fault a phone that comes pre-loaded with songs from your childhood? The N96 comes with Michael Jackson’s Thriller and Bad and its speakers are good enough to entertain your friends. I’ve no idea who chose the tracks, but they’re quite eclectic—rather like the device—and I didn’t expect a phone to send me on a nostalgia trip.

It isn’t as pretty as the iPhone, though, not by a long way. The Nokia is the quiet girl with glasses. The iPhone is a cheerleader. But let’s face it—you’ll probably settle down with the quiet girl. Admittedly, she doesn’t have a touch screen, and her butt’s on the big side. (Not that having a big butt stopped sales of the Suzuki Swift, but I digress). But the quiet girl has so much more up her sleeve—live TV for example (at least in Delhi) and a better camera to and Nokia Maps which beats Google Maps when it comes to navigation.