Chetan Seth takes us through his cigar collection

There are a million metaphors attached to the cigar. The cigar world's puff daddy takes us through his collection, and inspires many new ones.

There are a million metaphors attached to the cigar. If Kind Edward VII considered it figurative of a life of excess, Freud and Churchill lent it depth and character. The elaborate cigar-making process begins by hand-picking tobacco leaves. These are rolled on a woman's thighs and finally left to age in temperature controlled humidors. Creating a fine cigar is a skill rare to Cuba, Honduras and the Dominican Republic. In all, the cigar is destined to remain the preserve of a tasteful few. 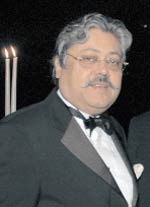 Chetan Seth, Chairman and MD, The Chemon Group
Some of my favourite cigars are torpedos. Unlike straight ones, these have pyramid shaped heads that concentrate flavours and aromas on the palate. My collection includes the well balanced Montecristo No. 2, the spicy Partagas Serie P No. 2 and the vegetal Romeo Y Julieta Belicosos. My latest acquisition is the Cohiba 1966. This Edicion Limitada, launched last year, commemorates the 45th anniversary of the company eponymous set up to cater to former President Castro's fancies.

If you're new to cigars stick to tried-and-tested Cuban brands. Diversify your collection with shapes instead. Romeo y Julieta's Romeo No. 2 is a popular and easy corona. The Cohiba Siglo I, described as a petit corona, adds a bit more punch. Balance out your collection with the long and evened-out smoke of the Partagas Lusitanias and the H.Upmann Magnum 46.

To add strength, stock up on robustos. The Partagas Serie D No.4 is a short yet strong smoke. The Hayo De Monterrey, on the other hand, evolves in intensity without being vigorous. Round off your collection with complex churchills and torpedos. The uninitiated mustn't try these strong flavours at the outset. To be able to appreciate heady smokes, a steady progression from mild to medium-bodied is recommended.

Cigars need humidity levels between 70 and 75 per cent. Temperatures shouldn't cross 20 degrees celsius. Although all humidors come with a hygrometer, check the cigar by pressing it between your thumb and index finger. A crackling hard one is under-humidified, while a springy one is ready to be enjoyed.

All said and done, the cigar is and will always go beyond its worth in puffs. The writer is the founder of Cingari, India's only retailer of Habanos Cigars.