Electric cars have long held hope for a pollution-free ride. A bunch of machines that featured at the Delhi Auto Expo keep that promise alive.

What's more, electrics cost very little to run. Reva, the only Indian electric carmaker, claims a drive from Connaught Place to Delhi's Airport will cost just Rs 10. A petrol car that goes 15 kilometres a litre would cost roughly 6.5 times that. Oh, and there's that big benefit of zero tailpipe emissions.

But that's where the virtues end. The word tailpipe is a crucial qualifier for electric cars since most of India's power, that charges the batteries, comes from coal. As it is there's barely enough to power our homes. Electric cars also have limited range and need long recharges every 100 kilometres. Impractical for long drives.

That brings us to the next best thing. Hybrids marry the range and speed of a petrol car with the 'green cred' of an electric. The world's best known hybrid, Toyota's Prius, combines a 98-hp petrol engine with an 36-hp electric motor. That's enough to take the car to 170 kmph and a range of 960 km.

But hybrids are pricey. In addition, not a single car maker builds them in India. Import duties effectively double the cost. That leaves CNG, the cheapest 'green cars' you can buy in India. These cost less to drive than petrol and diesel cars and emit less pollution too. The problem is getting a refill. In fact, even finding a CNG station is like playing a city-wide game of treasure hunt.

Even though eco-friendly cars are far from mainstream, the signs are encouraging. This year's Delhi Auto Expo had a special focus on green cars and auto technology. Car makers obliged by putting on some exciting concepts and production models. Here's a look at what could be in showrooms in the near future.

Reva NXR
Reva NXR
The first thing you notice about Reva's brand new model is that it looks nothing like its predecessor. The dinky car silhouette has given way to sharper lines and muscular side-panels, courtesy DC Design. There's even more space in the back, which only fit a few shopping bags till now. Under the hood, better batteries, power management and algorithms have doubled the Reva's range to a respectable 160 kms. The car itself can go up to 104 km/hr. The problem is the price. The new battery options could almost double the current Rs 3.5 lakh pricetag. VW XL-1
VW XL-1
Yes, it's still a concept, and it may be a bit too futuristic for your taste but who's complaining? Believe it or not it once went an unbelievable 100 kilometres on less than a litre of fuel. The XL-1, Volkswagen's hybrid concept, is by a very large margin the most fuel-efficient thing on four wheels. VW says it will have the car available for the mass market within two years. The XL-1 currently features a 47 hp, 800 cc engine and a 27 hp electric motor. Its 8.3 litre fuel tank is good enough for a 540 kilometre ride (when it isn't trying to set records). If VW gets the price right, this one's a winner! 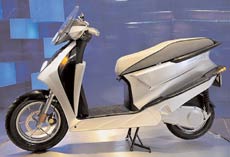 Hero Leap
Hero Leap
If the already pocket-friendly mileage of a scooter wasn't enough, Hero MotoCorp decided to go further. The Leap hybrid scooter features an electric motor and a petrol engine. Few details are available about the scooter other than it obviously features front disc brakes and an elongated telescopic suspension. Both should combine well for some sharp handling. Currently, Indian two-wheeler manufacturers offer only all-petrol or all-electric bikes. The leap will be India's first hybrid two-wheeler. Hero MotoCorp collaborated with several foreign consultants and has applied for a number of patent and design registrations for the Leap.

Nissan Leaf
Nissan Leaf
Think of it as the refined, slightly larger European cousin of the Reva. Launched in 2010, the Nissan Leaf is already one of the best selling electric cars in the world. For starters, it has four doors to the Reva's two, which of course means more space. A full battery charge will take you about 175 kilometres. In other words, you could go all the way from Mumbai to Pune and then some before needing a recharge. The downside is it costs three times more than the Reva NXR. And that's before import duties. No one said being green was cheap. Not for the moment, anyway.

Peugeot 3008 hybrid
Peugeot 3008 hybrid
Peugeot never really made a name for itself in the Indian market. That shouldn't stop us from acknowledging what is arguably the best-looking green car of Auto Expo 2012. The muscular lines and those gleaming LED lamps add a welcome, sporty edge to what is the world's first mass-market diesel hybrid. Combined with the electric motor, the 2.0 litre diesel powerplant will put out a very robust 200 bhp. Another amazing stat: it will need just 3.8 litres to go 100 km.

Tata Manza hybrid
The Tata Manza hybrid concept is a strong Indian response to what is largely an international carmakers game. Popular for its spacious rear seats, this hybrid concept features a 1.05 litre CRDI diesel engine and a 45 kw electric motor. The engineers claim that the solar panel on the roof can help in recharging the lithium-ion batteries. What's more likely is it will be used for the radio and cabin lights, which don't need as much power. In theory, running on a full 44 litre tank of diesel and assisted its electric motor, the hybrid Manza could go 1,000 kilometres.