When India’s first ever microbrewery opened up for business, Bibek Bhattacharya was first in line.

Looking for anything in Gurgaon, the mega-city without street signs, is a nightmare. But I’m not going to give up. I have an appointment with a beer. Specifically, a beer at India’s first ever microbrewery. The first I heard of it, I thought “a micro-what?” But the concept is exciting—a microbrewery, or a brewpub as it is called internationally, is an establishment that brews its own beer. And this being India, the first ever brewpub makes a feature of cricket, too.

My destination is Howzzat!, in the Galaxy Hotel in the skyscraper city. The brewpub is on the second floor, and it makes its presence felt even before you walk in. Massive copper tuns behind a glass wall loom over the entrance. Walk in and the view’s even more impressive—a colourful chrome dream of a pub that Quentin Tarantino would have dreamed up, if he was a beer-guzzling cricket fanatic. 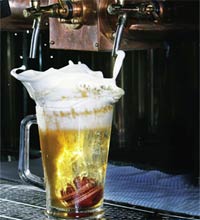 Howzzat!
Vivek Sharma, the GM of Galaxy Hotel and Howzzat! explains how the concept came together. “In early 2008, the licence to brew beer on restaurant premises became available, and a few states, including Haryana, ratified it,” he says. “We’d been planning to start a microbrewery for a while, so we immediately got ourselves a licence.” As for the cricket bit, he says: “In Europe, people gather in pubs to drink beer and watch football. In India, the equivalent would be cricket.”

The pub does go to great lengths to score on the cricket theme. The plush sofas are in the shape of gloves, while every table stem is a transparent hollow tube stuffed with cherry red cricket balls. Facing the bar is a giant screen constantly showing whatever cricket that’s on the telly. “When there aren’t any live matches going, our patrons can choose from an extensive list of classic cricket DVDs that we have,” says Sharma. And that’s not all. Thick copies of Wisden and other cricket books lie on a shelf next to a rather spooky wall studded with faces with glowing eyes wearing helmets. There are other startling designs—like the one with gleaming pads protruding out of a pillar, or the gilded sculpture of a batsman depicted on another pillar.

But the beer is the real star. Right behind the bar lie the imposing tuns where the beer is brewed. And it is almost like a mini-laboratory inside. They’re brewing a fresh batch today, so two microbiologists are studiously peering into a massive smoking tun full of a seething mass of boiling mash—crushed malted barley and wheat, the two prime ingredients that go into making beer is being churned inside with boiling water. While the mash is boiled down, hops are added to the mix. Hops come from the flower cones of the hop plant: they give the beer its flavour. At the brewery, two sets of hops are added, one for flavour and the other for aroma. Once the water in the mash evaporates, you’re left with a thick liquid called wort. The wort is then transferred to another tun with freezing water. Then the cooled hopped wort is ready for fermentation.

After the cooling process, the mash passes into a copper tun where the yeast is added. Here starts the finely calibrated process of fermentation, which goes on for a good week to 10 days. Different batches of beer of varying strength is produced. And to drink, well, just open up the taps at the bar and let it flow!

I’ve never tasted fresher beer than this. There’s not a hint of the preservatives that are part of the taste of any bottled beer, and there’s more body to the drink. All of the four beers on offer are great—a premium beer, a light beer, a dark beer and wheat beer. I’m especially taken by the last two. The dark beer has a hint of sweetness that strikes me as a little strange, but a couple of sips later, it turned out to be a great aftertaste. The sweetness is due to the extra concentration of hops in the dark beer. What makes a brewpub work is identifying beer as a gourmet drink, to be taken as seriously as, say, a single malt. And Sharma is aware of this. “We’re trying to get the customer to perceive this as a unique experience,” he says. And to that end, if you are unsure about which beer you want to order, you can first do a tasting to find out. The four beers come in four long test tubes held in a cricket batshaped tray. To help you get a better idea of what the beers are about, there are table mats with instructions on how to do the tasting. I tried it, and the various flavours were a revelation. Usually considered a laddish drink, the subtleties of beer have long lost their charm. Most of the time, beer is just something to be guzzled, like soft drinks. At Howzzat!, you’re encouraged to savour the beer, taste the preservative-free freshness and enjoy your cricket.

The menu is designed not to interfere with the beer. It’s mostly finger-food, albeit well prepared and presented. I tried the Tangra style Chicken and the Mixed Grill platter—tasty treats and quite filling. Finally, I don’t know what a non-beer-drinker would do at a brewpub, but at Howzzat! there is a choice of other spirits and a variety of champagnes and wines. Evidently, Sharma is not leaving any stone unturned to make the pub a success. “We’re already building a reputation among the locals, especially the expats. If this works out, then expect more flavours, more varieties, and more branches.”