Of Independent Tunes and Maverick Minds

The Indian music industry is hankering for fresh talent and new sounds. Industry experts suggest that it is the best time to be an independent artist.

Indian Ocean performing at the Dewarist at Bacardi NH7 weekender (Image courtesy: (NH7 Weekender)
Anushree Basu-Bhalla
For 17-year-old Vijay Nair, travelling with a rock band and managing their work seemed like a terrific idea. While working as a design and publicity resource with Gigpad.com - a networking website for musicians - he got approached by an underground band called Acquired Funk Syndrome (AFS). He was well-networked because Gigpad was the only online community for Indian independent musicians between 1999 and 2000. "AFS needed some help with getting gigs and spreading the word around and they came to me. I took the job at once," says Nair. He liked what he did, and soon went on to set up his company - an independent artist management firm called Only Much Louder (OML).Within a decade, OML branched out into the lucrative live music business of organising concerts, gigs, festivals, and even a record label. The company that started with just five artists now manages more than 1,000.

"Like any start-up, I too had to struggle at first. Banks weren't ready to give me a loan for a business that dealt with 'niche' music," he says. Over the years, Nair has worked with musicians who made non-Bollywood music, from genres as diverse as rock, blues, jazz, folk, classical, and even fusion. "Money-making was not the agenda at all. All we were thinking was 'Alright, we've got to save up for two months to burn this CD and put it out.' And once the money started coming in, we literally reinvested that in making more CDs," says Nair. Vishal Dadlani of Pentagram performing at Bacardi Black Rock Arena (Image courtesy: NH7 Weekender)
To say that independent musicians (or Indies as the industry refers to them) and the business of selling 'niche' music is tough is an understatement. Most often, indies don't have the support of a well-established record label to cut an album for them as these companies tend to stay away from unexplored people and genres. Currently, the music sales pie is dominated by Bollywood music, which accounts for 65 per cent of the business. The rest is shared by devotional music (23 per cent) and regional music (11 per cent), leaving almost no room for independent artists to be seen or heard.

In order to nurture the enormous yet latent talent that gets lost in translation, alternative artist management businesses and record labels have surfaced in the last decade, changing the way indie artist are perceived and managed. Companies and organised web interfaces like OML, Underscore Records, Hungama, ArtistAloud.com and Amarrass Records, apart from digital distribution services of iTunes and Amazon, now ensure that artists get decent royalties (up to 70 per cent of each song download cost), have control over the kind of music they want to make and, most importantly, own the copyright to their works. 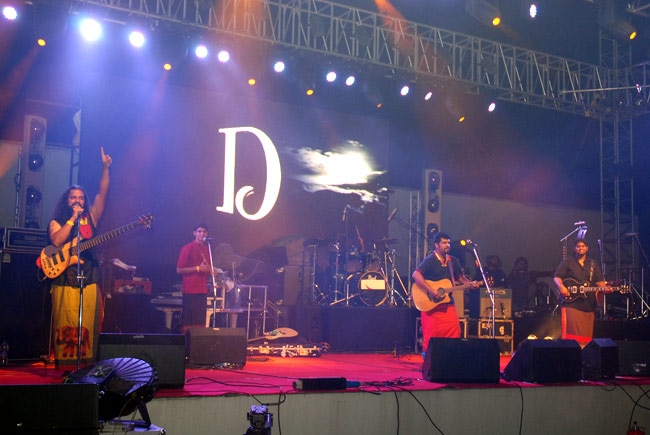 Raghu Dixit at The Dewarists Stage Bacardi NH7 Weekender-2011 (Image courtesy: NH7 Weekender)
But these management companies aside, the rise of indie artists can, in large part, be attributed to the technological and socio-economic development that the country has seen in the last few years. "The biggest change is the widespread acceptance of a parallel music culture, other than the formula-based Bollywood," says Somini Paul, assistant vice president, ArtistAloud.com. Also facilitating the making of DIY (do it yourself) albums from dim-lit studios was the availability and affordability of computer hardware and recording software, and that wonderful thing called the Internet. Social networking websites like Myspace, Facebook, Reverbnation and Soundcloud meant that it was now a whole lot easier for a band to make new music, market it, and release an album online.

"It takes up to Rs 1.5 lakh to record a single song in a decent studio, should you want a good production, and many independent musicians find it hard to self-publish their work," says artist Shubha Mudgal, who also co-runs Underscore Records, an independent record company that digitally distributes albums of indie artists in the classical and folk genre. Not an easy sum for most struggling artists. Monica Dogra performing at The Eristoff Wolves Den (Image courtesy: NH7 Weekender)
A PWC report suggests that by 2015, the Indian music industry is set to grow up to Rs 21.4 billion, registering a growth of 25.7 per cent. But the physical sale of music albums is going to dip because of consistent volume de-growth emanating from factors such as price erosion, piracy and the emergence of digital distribution. Although the report suggests that digital downloads and mobile Value-Added-Services, or VAS, (ring tones and caller-tunes), will contribute up to 75 per cent in the growth of the Indian music industry over the next two years, industry experts say it is not going to lead to real cash inflow for an indie band. Digital downloads simply creates awareness about a certain band or an artist's work. The interest can then be converted into tangible monetary gains through live performances.

But before putting an album online, there are far too many areas to manage and pay for - consider sound mixing and editing, studio rentals, equipment rentals, cartage and transportation, producer's fee and distribution platform fee - even after cutting corners. This is where day jobs come in handy. By day, folk-rocker and frontman Raghupathy Dixit of The Raghu Dixit Project took up an IT job in Bangalore and, by night, honed his singing and song writing skills. Once he started making radio jingles that took care of the daily expenses, he quit his day job for good.

Apart from the odd day job and composing jingles, most indie musicians earn their living by playing live. "In the West, the whole thing is more organised, with enough places to play - clubs, pubs or auditoriums," says Rudy Wallang, the lead guitarist of the blues band Soulmate. Though Wallang hails from Shillong, the capital of rock 'n' roll in India, he says that he does only an odd gig over there owing to the lack of venue infrastructure. "It's hard for a show organiser to get us from Shillong to any other part of the country because of the travel costs involved. This has taught us to connect the dots and plan for multi-city tours or weekly series of gigs at a particular venue. The cost is shared by multiple organisers - we get to travel, play our music and earn a living." Basement Jaxx performing at The Eristoff Wolves Den (Image courtesy: (NH7 Weekender)
Companies like OML and indiesision.com (a music blog that has now diversified into organising one of India's biggest indie festivals, NH7 Weekender in Pune) follow an 'event-funding model' where both brand partners and participating artists can enjoy greater exposure. Music festivals are planned with four to five years of incubation period with initial investments ranging from Rs 2.5 crore to Rs 4 crore, with event sponsorships ranging from Rs 1 lakh to Rs 70 lakh. The footfall at a festival in a second or third year can go up to 30,000 with passes costing upwards of Rs 1,500 each. In 2012 itself, multi-stage, multi-day events to travelling festivals and single-day affairs occupied the first three months - from the National Youth Festival in Mangalore to SulaFest in Nashik to the Gulmarg Winter Festival in Kashmir.

The cohesive creative movement that the music industry has witnessed over the last few years is finally benefitting the indie artist. The divergent path has paved the way for the entry of off-beat genres into mainstream television channels and even Bollywood. The advertisement pie for music channel, estimated at Rs 400 crore by the PWC, has proved effective in creating new products such as Dewarists, a show that showcases travel and music in a docu-drama format, and Coke Studio @MTV, which brings mainstream Bollywood artists together with regional talent (think Kailash Kher and Chinnaponnu).

More bands are playing more gigs and releasing more music that's being heard by more people than ever before. The Indian indie music scene is no longer an isolated and underground movement. Yet, it would be silly to assume that Indian indie music would soon take over the 'mainstream'; there will still be more takers for the mass products that Bollywood churns. However, as long as there is an incessant desire for fresh ideas and an inherent inclination for the offbeat on the part of both musician and audience, the indies are here to stay.