Malt cruises, tastings in perfumeries, whisky spas—India’s passion for high-end whisky is blooming in all kinds of exotic directions. Just imagine if the stuff was freely available…

Like all long-term love affairs, this thing that India has for whisky is... well, it’s complicated. There have been ups and downs, romance and bickering. On the one hand, whisky is like cricket, an aspect of our colonial inheritance with which we’ve become utterly obsessed. But then the analogy falls down because India excels at cricket. And at Scotch... it’s complicated.

Don’t be fooled by the numbers— numbers like 87 million cases in 2007, more than double what America could manage. Ninety-nine per cent of those were cases of what’s known as “Indian Whisky”, a form of molasses-based drek, which brazenly defies the definition of whisky as a grain-based product—and, therefore, isn’t whisky at all. (In fact, it’s closer to rum, not that you’d never call India a Rum Nation. That would be daft.) An indication of Indias attachment is how closely the whisky story mirrors the countrys emergence as an economic force
What matters is the remaining 1 per cent of cases, that topmost sliver—that’s where hope springs. It represents India’s galloping passion for imported Scotch and single malts, the highest evolution of the national palate. It’s a reach for the stars, for all that’s lofty and exquisite; a glimmer of our potential and appetite for life. It’s the romance, not the bickering. That’s the Whisky Nation we’re talking about here. And here’s where the news is good—the real whisky market in India is growing despite all state and government attempts to the contrary.

One indication of India’s attachment to whisky is how closely the whisky story mirrors the country’s emergence as an economic force. The whisky graph first started to spike when Manmohan Singh reformed the trade tariffs in the 1990s, a time when duties on imported Scotch were so severe that only the uppermost crust could enjoy it —you either paid five times the going rate, or you brought bottles home from your travels.

But once the shackles began to loosen, that all started to change. We embraced imports like Bells, Teachers, Vat 69, 100 Pipers, and fell head over heels for Johnnie Walker Black. And as the economy grew—and as import duties climbed down year on year from a murderous 400 per cent four years ago to the merely scarring 150 per cent today—along came single malts. And our heads were turned forever.

The single malt world in India today, is a hive of activity. The elitism of it alone, is proving irresistible. As Mahesh Madhavan, CEO of Bacardi, notes: “There’s a one-upness about whisky that is very popular—it’s a huge status thing, just like wine.” A taste for single malts is more than just an evolved palate—it’s a statement of wealth, culture, sophistication. 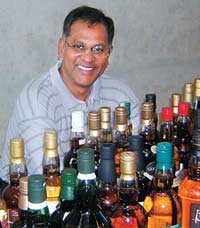 Weve seen exponential growth, but you still cant find single malts in this country: Krishna Nukula, Malt Maniac
A statement of luxury, in other words, one that whisky has always made in this country, with its colonial lineage, but never more so than today. So, the activity in the malt world is all about seducing what marketing people call “premium clients”—creating experiences where they can be educated and wooed at the same time.

The learning curve is endless with single malts, especially in a market where many still believe that Glenfiddich and Glenlivet are related because they’re both called “Glen”. So, the malt industry is dedicated to providing this elite with sumptuous dinners and cruises up the Scottish coast and all sorts of appreciation opportunities. Sandeep Arora, one of the industry’s pioneers, can’t stop dreaming up ideas— he’s working now on a concept about whisky spas.

Gimmicks abound. For instance, Asif Adil, Managing Director of Diageo, has been tweaking the rituals of whisky drinking. “We introduced the frozen Johnnie Walker Gold,” he says. “First you put the bottle in the freezer till it freezes. Then you let it sit out for a few minutes, and as it starts to unfreeze, you pour it through the ice in the bottle. With (Johnnie Walker) Blue, we started serving it neat with a glass of chilled water at the side to deaden your tongue just before you do the shot—it’s more intense that way.”

Few, however, have pushed the envelope quite like LVMH on behalf of Glenmorangie. “We had a tasting at a perfumerie last year,” explains Marketing Director Gaurav Bhatia. “A qualified perfumier did a study and found 26 aromas in it. We had tasters at perfume stations helping people pick out the vanilla and geranium, the aubergine, lemon peels… It’s a sensory adventure.” Bhatia is given to florid raptures about luxury products. Describing the original Glenmorangie, he says: “You’re in an Italian garden, with fruit ripening in the sun, a hint of vanilla ice-cream, some geranium and mint—it’s a velvet explosion!” (See our tribute to the language of tasters in The Connoisseur’s Phrasebook).

Then there’s the whole science of food pairings—fabulous appreciation dinners in five-star hotels for which chefs are flown in from Scotland to marinade venison loins in Glenmorangie Quinta Ruban.

And this is just the beginning. This is an industry mired in regulations and prohibitions. It’s like a love affair with your clothes on.

The activity in the malt world is all about seducing what marketing people call Premium Clients?
“I’d say we’re still in a fledgling stage,” says Krishna Nukula, a Hyderabad-based member of the reputed enthusiast club, Malt Maniacs (we also feature Krishna’s favourite bottles in The Best of 2008). “We’ve seen exponential growth, but you still can’t find single malts in this country! If I wanted to sell malts in Andhra Pradesh, I’d have to sell it first to the state government, and then they would decide which retailers can sell it. So, retailers have to buy from the state. It’s the same throughout the south.”

It’s this reigning protectionism and reticence about alcohol, that’s the chief problem in the whisky industry—not to mention, the byzantine bureaucracy. The way Asif Adil puts it, we’re a nation divided. “There are 28 countries in India when it comes to alcohol and everyone has different rules! By this model, the government loses money, the consumers are poorer and the only ones who do well are the bureaucrats.”

The whisky industry is trying to remove these regulations by constantly lobbying the governments, both state and central, a process that is all the more interesting for the ironic involvement of Vijay Mallya. No one encapsulates India’s complex relationship with whisky more than the embattled Kingfisher boss. Once he was all for high import duties, since his own UB Group produces “Indian Whisky” by the tankerload. But since he bought Whyte & Mackay, he’s all for imports.

Not that this particularly endears him to the malt enthusiast. Mallya’s insistence that “Indian Whisky” deserves the name “whisky”, that and ought to be sold as such abroad, an argument that upsets, even embarrasses, most selfrespecting maltheads.

“I’m suspicious,” says Nukula. “He still wants Indian whisky to be sold abroad as whisky, I think he wants to change the definition of whisky so that he can export his IMFL, mix it with Scotch, and then sell it to China and Russia.”

But at the cusp of 2009, with the single malt industry on the up, isn’t it possible at least that Mallya might do what no Indian company has managed to date—to create a world class single malt from our own soil, something to rival the Japanese or the Swedes?

“Oh we haven’t got the patience,” laughs Nukula. “But a man can dream!”