The sun is rising on Japanese whiskeys as bartenders across the world are realising their mild yet rich flavours that can be enjoyed neat or in cocktails. 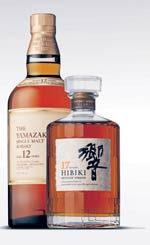 The Yamazaki 12YO and Hibiki 17YO are two of Japan's oldest and finest whiskeys
Yamato-Damashii. This ancient phrase literally means Japanese spirit. Despite its brush with warfare and natural calamities down the ages, Japan's undying soul remains intact.The sun has always risen on Japan, literally and metaphorically. In a more leisurely sense too, Japanese spirits, most notably its whiskies, are gaining a foothold in a world where scotch has always dominated.

Ask the Japanese what makes their liquor special and the quick reply is, the weather. Japan's long summer is ideal for distillation and by the time autumn comes around the whisky is calm. Spring on the other hand brings in mellow fragrances of cherry blossoms and the largely dry winter is conducive for ageing malts and blends. Each season plays a special role in creating the final product and Japan's whisky industry has done well to exploit the weather's virtues. The industry builds on ancient processes and traditions, producing unique blends and malts that get better with age.

Japan's tryst with whisky is believed to have begun in 1870 when Commodore Matthew Perry gifted Emperor Meiji Mutsuhito 100 gallons of American whisky. The Japanese' love affair with this drink was nurtured by its two liquor legends Shinjiro Torii and Masataka Taketsuru. 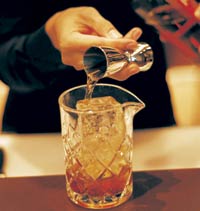 Hibiki 17YO 60 ml
Squeezed fresh root ginger (1 inch )
Fresh mint(6 to 10 leaves)
Sorghum Liqueur(20 ml)
Mix and pour over crushed ice
Garnish with lime peel and serve in a tall
glass. The pungent tones of ginger are
balanced by the sweetness of the liqueur.

Miyagikyo 19YO 60 ml
Lime juice (30 ml)
Brown sugar(half tea spoon)
Lime wedges (4 to 5).
Serve in a tall glass and garnish with mint
and rose petals. The lime wedges should be
left un-squeezed. This will release fresh
aromas and a flavourful aftertaste.

Japanese whiskies are best had neat or with water. Sparkling water kills the flavour.
In 1923, Shinjiro Torii, the founder of Suntory, built Japan's first whisky distillery in the valley of Yamazaki, on the outskirts of Kyoto. In Suntory, the whisky was distilled in copper pot stills, a trend then exclusive to Scotland. Today, Suntory exports to more than 35 countries and is hailed for its single malts, especially the 12-year-old (YO) and the 18YO. While the younger variety is medium bodied with a mellow, honeyed nose and a lingering woody dry finish and fuses aromas of dried fruit and honey, the more aged one is full-bodied and lends itself to toffee aromatics which offset its spicy cherry-like tones. In an effort to make each drink distinctive in flavour and aroma, the ageing is done in casks made from American, Spanish and Japanese oaks. In Japan, this single malt is either enjoyed on the rocks as an after-dinner drink or paired with sushi and sashimi as a tall drink with a splash of water and ice.

Following Torii's lead, Masataka Taketsuru travelled to Scotland in 1923 and learnt the art of malts from the Scotch. He founded Nikka Whisky which operates out of two distilleries - Yoichi and Miyagikyo. The former is on the northernmost island in Japan and falls on the same latitude as Toronto and Vladivostok. This means that it experiences extreme temperatures and snow; the perfect setting for ageing malts. Here, the pot stills are heated using powdered coal, a traditional technique hard to find even in Scotland. Miyagikyo in the northern Honshu state is set amidst mountains and rivers and the humidity here is suitable for distillation. The crisp mountain air further helps in producing soft and mild malts. Nikka is hailed for its blended malts such as the signature 'from the barrel' which is blended and then re-casked, and bottled directly. The Tsuru 17YO on the other hand has a surprisingly smooth finish and a sweet balmy aftertaste even after a long ageing.

The other labels to watch out for are the Karuizawa and Ichiro. Set up in 1955 at the foothills of an active volcano, Mount Asama, the Karuizawa distillery uses basalt, or hardened lava, to filter the water, lending a distinctive taste to the spirits. Their 1981 vintage is bottled at full strength from a single sherry cask, resulting in rich barley flavours and deep amber colours. Ichiro on the other hand retails young 3YOs mellowed with citrus and honeyed tones.

Today, Japan is among the world's leading whisky producers and a whisky loving nation, much like India. With Japanese food gaining a serious foothold in India, the going has never been better for whiskies from the country.

Radico Khaitan, a major Indian liquor producer, started the trend this year by launching Suntory's premiere whiskies in the Metros. You can now find Yamazaki 12YO (Rs 6,500) and Hibiki 17YO(Rs 9,500) at premier liquor shops. Hotels too have begun to import select brands. There are plenty of options should you choose to indulge. Kanpai! 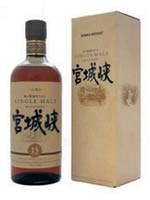 Yoichi 20YO
This is an elegant and gentle whisky. Its flavours require a bit of chewing. It is paired best with steamed asparagus and steamed dumplings. Alternatively, make it a dessert drink and pair with chocolate and raspberry pudding. 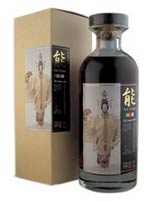 Karuizawa 21YO
Karuizawa 21YO
This whisky has a good nose of honey and is full of summer fruit flavours. Its crisp taste with a long finish would pair excellently with stringy lotus stems soaked in honey and sesame as well as a crispy tempura dish.

Yamazaki 12YO
To balance the gentle fruity and cocoa tones of this malt, serve it with pungent and spicy dishes. Some interesting pairings are pea samosas, murg achari tikka and laal maas.