A budget carmaker tries its hand at luxury while a luxury carmaker goes the other way. Welcome to the genre-hopping world of Maruti Suzuki and Toyota.

Vikrant Singh
It's not easy to shatter stereotypes, but both Maruti Suzuki and Toyota seem set to do it with a vengeance, with the Kizashi and Etios respectively. But, how well have they done? Lately, I have been spending a lot of time driving the Mercedes-Benz E-class, a car meant for the truly rich and influential. It's also a car which, in my current job and financial situation, I cannot even dream of owning.

This fact is well understood by my neighbours, friends and family, and in fact everybody who sees me drive the car. However, that hasn't stopped me from behaving as if I do. I dress better now. I shave regularly and, even if it's just a run to the local grocer, I make it a point to be perfectly presentable. And that, dear reader, is the power of a luxury brand; it just brings out the best in you! It truly is a way of life.

So, when Maruti Suzuki, known only for its small cars meant for the middle class, forayed into the luxury arena with the Kizashi, a lot of eyebrows were raised. Needless to say, it's not really taken the market by storm. You see, we love stereotypes. We love to classify things and can't seem to accept (readily at least) an anomaly to our labeling. Then there's the doubt-would I get the same stares and appreciate nods driving an expensive Maruti, as I would a Honda Accord or a Skoda Superb? After all, I can buy these for only a little more money.

But Maruti isn't the only 'middle-class' car maker to have tried a hand at the luxury segment. Hyundai too attempted it some years back and not just with one but three models. It launched the entry-level luxury Sonata saloon, along with an entry-level SUV, the Tucson and a high-end off-roader called the Terrecan. Neither sold well. The Toyota Etios owner, yet another variance, will have none of the doubts associated with the Kizashi. 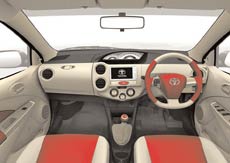 The Toyota Etios comes with a large and handy boot; although the finish is plasticky,
Toyota is seen as a brand that borders on luxury. More importantly, it's a brand that stands for quality, reliability and infallible fit and finish. So, when Toyota launched the Etios, an entrylevel sedan that goes head to head up against the Swift Dzire, the buying public wasn't skeptical even though it was a huge step down from its current range of cars.

In fact, the public saw it as a great opportunity to step into the world of snob without having to break the bank. Expectedly, it had record bookings in its first week of sale. Another Japanese carmaker, Honda attempted the same feat by launching the Jazz, a hatchback. However, it tasted limited success thanks mainly to its high price tag. I mean, you could still buy a sedan for much less money!

So, it's quite clear, when it comes to increasing sales, stepping down is always easier than moving up the ladder, given, of course, you get the price right. The question that beckons however is how well have Maruti Suzuki and Toyota played their cards with regards to their respective products.

First the Kizashi. With its aggressive styling, its large wheels and a bold front, the Kizashi screams for attention. It's also very modern looking and fits the tag of a luxury saloon quite well. Inside too, the design is appealing and the sort of equipment it comes with- the 10-way adjustable electric seat for the driver, 2-zone climate control, a high-end stereo, keyless entry and start, and of course, 6 airbags, ABS and even ESP-it shames a few steeper priced saloons when it comes to pampering its occupants. In this regard, the Kizashi definitely makes the grade.

The Etios offers enough space for a comfortable ride.
It also has a large 2.4-litre engine as well as the option of an automatic gearbox. On top of that, the car has a ride and handling package that's both comfortable over poor roads and stable at high speeds on the highways. What it lacks, though not by much, is space and opulence. If you were to compare the space to a luxury sedan like the Accord, then the Kizashi is limited. Add to that the fact that the quality of plastics and buttons all round fail to exude the sense of richness and opulence you expect in a car in this category. But overall, given the price tag, it is a fantastic attempt at producing a luxury car. 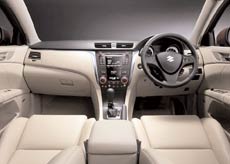 The Maruti Suzuki Kizashi offers a bold front and aggressive styling; the Kizashi looks great inside and feels just like a luxury saloon.
Toyota too has taken the task of producing a cheap car very seriously. One can see the results in every aspect of the car. Dressing down is the mantra here. The Etios looks dated and borders close to being boring. Inside the car, the design, the quality of plastics, the fit and finish and overall feel, is quite simply unlike a Toyota. In fact, it resembles a slightly souped-up Tata Nano at places.

But not all is lost, because when it comes to the engine, the gearbox, the space and the ride, the Etios more than justifies its Toyota tag. Like other Toyota models, the engine is strong and fuel efficient and the gearbox, easy to use. What's more, the amount of space within the car means that it is able to transport its occupants in comfort. It even comes with a usable boot. Moroever, given Toyota's history in India, there's no reason to doubt its reliability either.

Kudos to both Maruti Suzuki and Toyota then, for attempting something that's completely new for both carmakers in India. But of the two, we feel Maruti has certainly done a more thorough and convincing job of hoping segments with the Kizashi than Toyota has managed with the Etios. How either fares in the marketplace is another story altogether.
(The author is Associate Editor, Auto Bild India)