Is the Aman effect possible in a throbbing metropolis? Sanjiv Bhattacharya finds out.

It’s a preposterous idea, really, an Aman hotel in Delhi. It’s like finding a Michelin restaurant in a mall or a Six Senses spa in a car park. This is a brand known for high temples of subtle luxury, paradise resorts in stunning locations like Phuket, Bali, Bhutan and the Caribbean. 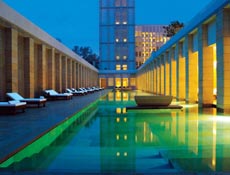 The swimming pool
Devotees call themselves Aman junkies and await news of the next hotel like tweens await the next Harry Potter. They know that “aman” means peaceful in three languages and that Adrian Zecha, the founder, has a thing for challenging sites—a virgin island or an untamed peninsula—places that other hoteliers would fear to tread.

And yet here I am at Zecha’s latest venture, on the Lodhi Road in teeming south Delhi. It’s a challenging site all right—while its cousins overlook tropical forests or white sand beaches, the Aman in Delhi looks onto a flyover, another honking jam. What happened to “peaceful” in three languages? Aman hotels are famous as escapes from cities and yet here the Aman Delhi stands in the thick of it all, as a rebuke to the choke and throb, like some kind of antidote. But, does it work?

For girls as for hotels, the approach is everything—the first impression, the opening line is the foundation of any seduction. Most posh city hotels follow the formality of entrance steps, regalia doormen and a security screening machine. At the Aman, these conventions are abandoned. Lodhi Tapas
The car drops you at the threshold where immediately a sparse and vast architecture swallows you up, an expanse of featureless sandstone stretching out before you. Instead of signs or steps or costumed doormen, you are greeted by a few smiling Aman staff in clinical white, who walk you past the single Jaipur elephant and a lotus pool of flowers, directly to your room.

It’s disorienting at first, the sense of space. On a site of 6 acres, there are only 40 basic rooms (an Aman signature) with a further 28 suites in a facing building. So even with a 50-metre pool, three lawn tennis courts, squash courts and a giant gym, there’s plenty left over. As with other Aman resorts, the illusion that you have the place to yourself is powerful—all this opulence is yours. And it gives walking through the Aman a dreamlike quality. The stillness, the space, the clean lines and restful colours—rich mahogany, creamy sandstone, olive and glass. 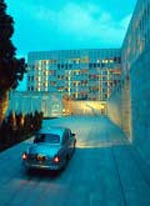 The entrance to the hotel
Long sheer walls, a canvas for the imagination, and corridor-like tunnels, draped with the shadows the sun throws through the jaali screens. Listening to our footsteps and the pleasantries of the escorting staff, the mind unmoors itself, it defragments. I expect to see figures from my past appear at the end, old school friends guiding me to the lift, and then magically appearing to greet me at the bottom. We arrive at our suite, already transformed.

We’ve booked into an Aman room, one of the 53 accommodations out of 67, that has a private plunge pool on the balcony. Up on the seventh floor, the view of Delhi is flattering—a cushion of treetops through which the occasional tower or monument pokes. Humayun’s Tomb to the right, the flyover below. But the foliage muffles the city at this elevation. It just hums, a kind of static, while we splash around in the plunge pool like infants.

What to do but spa and chill and call-room service? The Aman was never conceived as a regular hotel. Though it stands on the site of the former Lodhi hotel, which went on sale about six-and-a-half years ago, Zecha was adamant that the Aman would be a resort, not a city hotel.

So no banquet rooms or shopping arcades. There was even some debate before Wi-Fi and televisions were installed in the rooms and understandably so. The Aman magic is the way it removes its guests from their daily lives and returns them to a state of innocence and comfort. Checking e-mails and watching Rajdeep Sardesai shout his head off does not make a vacation. The Spa Treatment Room
So we don’t touch either. We order rubdowns and haircuts, pastries and cocktails. And for two days, we wander through the hotel’s cavernous corridors from one appointment to the next, smelling of pomegranate and sandalwood massage oil, grinning inanely. The spa is typically opulent—vast, low lit, very Aman. You get a whole treatment suite to yourself, complete with rain shower and jacuzzi and massage table and pedicure station and, for the bits between treatments, a bed on which to hang out and read magazines. The signature massage incorporates a basket of styles, including Reiki, Swedish, and deep tissue. And the petite masseuse, Mai, has deceptively strong forearms. Apparently, the entire spa team were trained by Richard Rosen, an exuberant Californian who insisted they all do fingertip push-ups.

There’s even a hair spa, part of the hair salon, another lavish, personal experience—10 private booths of mirrors, fashion TV and an Australian man named Rod who knows his way around a pair of scissors. The salon’s name is Kim Robinson—a top-notch chain in Asia that makes its Indian debut in this hotel. It’s one of the few parts that the Aman is opening up to nonguests, no doubt an adaptation to its big city location. The other parts are the restaurants, three in all, all distinct and striking in their own ways. I haven’t tried the Indian and Thai place on the ground floor yet, but right next door, there’s this terribly clever French/Japanese fusion concept called Naoki, which serves Kaiseki Cuisine, essentially French food in a Japanese style (or, perhaps, the other way around). Foie Gras and Mango Canapés anyone? The corridor with the jaali screens
Crab Custard? Mushroom Sushi? There’s a set menu of up to 11 courses—and that’s just lunch. There’s also a fine dining Catalonian experience, the Lodhi restaurant, around the corner (see Appetite). Not to mention the buzzing Tapas Bar below, which could survive on its Grilled Chorizo and Patatas Bravas alone. The Aman Pool Room
The hotel transforms at night. The bar fills, the restaurants come alive—suddenly this island of serenity in south Delhi becomes a hub of clinking glasses and laughing girls. The Aman is a place to be seen. But up in our room, at the end of an endless corridor, our sanctuary remains.

Where earlier that day, daylight had flooded through the sliding glass doors, now there are wooden panels to slide across, sealing the room at every corner, a warm, dark wood box. We sleep in perfect darkness, through a woozy wine haze, our muscles kneaded, our appetites sated, listening to the city mumbling and whirring, several worlds below.