Unique, personal and intriguing; miniature paintings of the royals have always been great art, and now they form the cornerstone of any great art collection.

Jennifer Tonkin/Andrew Currie
There is something appealingly modest about miniature portraits. Small, intimate, they are often painted as keepsakes for a loved one. When it comes to royal miniatures the contrast between the grand and small scale is even more marked. Royalty, of course, has always used elaborate portraits to project power and position to their subjects at large; the iconic Holbein portrait of Henry VIII, for example, shows a king bestriding the world, confident and in charge-not a man to be crossed. Miniatures of George IV, as Prince of Wales
For anyone interested in history, royal miniatures are fascinating objects as they often give a glimpse of the private person behind the public persona. It is not surprising, therefore, that within the world of miniature collecting, a distinct market in royal miniatures has developed, giving people an opportunity to own items that held personal significance for some of the great figures of the past.

As in any collecting field, rarity and quality are the keys to value. Some royal miniatures are considered more desirable and valuable than others. The same miniature, for example, might be known in many variants; similarly formal portraits in a miniature form, executed perhaps as diplomatic gifts, have less appeal than more intimate works intended for personal use. 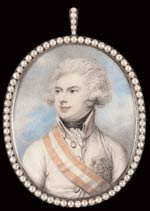 Mrs Fitzherbert
An air of mystery also enhances a work's appeal. The absence of absolute documentary evidence about why a miniature was commissioned not only adds to the pleasure of ownership-it can on occasion increase its value as well. 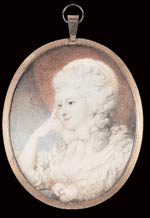 Dauphin of France
Now and again a royal miniature comes along which combines all of these factors: rarity, quality and mystery. A good example of this was the pair of miniatures in The Merchiston Collection sale at Bonhams in 2009 of Queen Elizabeth I and Robert Dudley, Earl of Leicester, by Nicholas Hilliard. They were painted in 1575-a key period in the tantalising relationship between Elizabeth and Dudley, when he made his last attempt to capture the Queen's heart by staging a nineteen-day extravaganza in her honour at Kenilworth Castle.

While there are at least two other versions of the Dudley portrait dating from about the same time, the portrait of Elizabeth had everything a serious collector of rare royal miniatures could want. First, there's no other portrait of the Queen like it. The image shows a veiled Elizabeth, in a simple black dress with little adornment-a stark contrast to her official portraits which stress her majesty and the detachment of the 'Virgin Queen'. Second, it was of very high quality. Nicholas Hilliard was not only the foremost miniaturist of his day, he was also one of the greatest ever masters of the genre. Finally, the fact that we do not know for certain which of the two sitters commissioned the pair adds to the mystery and fascination surrounding them. Despite their tiny height of only 19mm (3/4 inches), the pair was sold for a whopping Pound72,000 (Rs 50.56 lakh) at Bonhams. 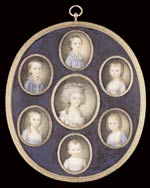 Empress Maria Feodorovna with her six children
It is worth considering this work, with its exceptional appeal, alongside another portrait of Elizabeth I by Hilliard auctioned at Bonhams in November 2010. It is a circular portrait on vellum, but unlike the Merchiston portrait, the Queen is depicted in all her regalia, wearing a black figured dress studded with jewels, a fine lace ruff and sapphires embedded in her tightly curled red hair. This more formal painting may well have had an official purpose-perhaps as a gift to an ambassador-and it follows the same pattern that is used by Hilliard in other portraits of Elizabeth. These factors are reflected in the selling price of Pound40,800 (Rs 28.65 lakh)-considerably lower than that achieved for the unique, more intimate work. 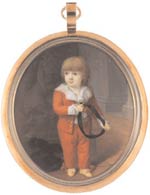 Prince Charles Edward Stuart
Royal miniatures of a very different sort formed part of the Albion Collection. Auctioned by Bonhams in 2004, they illustrate another aspect of these delicate art forms. The date on the reverse of the miniatures of Empress Maria Feodorovna of Russia and her six children, painted by the Swiss ex-patriate Henri Francois Viollier indicates that they were commissioned by her husband, Emperor Paul I before he ascended the Russian throne in 1796.

The miniatures' appeal lies in the skill of Henri Viollier, who perfectly captured the warmth of the relationship between the siblings and their mother. The piece also has historical significance. Paul was to rule for only four years before being assassinated in 1801 and two of the children, Alexander and Nicholas, went on to become Tsars in their turn. A third, Constantin, turned down the throne. This charming scene, therefore, is in poignant contrast to the troubles which were to beset the family in the near future. The group of portraits sold for Pound 66,000 (Rs 46.35 lakh), reflecting both their quality as works of art and their collective historic importance. Portraits of Queen Elizabeth
The identity of the sitter in royal miniatures can make a significant difference to the value, as observed at a recent Bonhams auction. It was a French school portrait of a small boy clutching the sash and medal of the Order of St John of Jerusalem. A handwritten in-scription on the reverse indicated it may have been the Dauphin, Louis Joseph Xavier Franois, son of Louis XVI and Marie Antoinette. However, the Order the sitter holds suggested that he was actually the Dauphin's cousin, Louis Antoine de Bourbon, Duc d'Angoulme, who was the last Dauphin of France and became king for all of 20 minutes before abdicating. He is known to have been awarded the Order when a baby.

In the event, the puzzle remained unsolved mainly because the sitter in the portrait has brown eyes and Louis Antoine is always depicted with blue eyes. As a result the miniature was simply catalogued as, 'A Noblechild' and sold for Pound10,000 (Rs 6.95 lakh). Had the identity of the child been confirmed as Louis Antoine, the miniature would almost certainly have fetched a higher figure. Had his cousin, Louis Joseph, been the only possible sitter, the price is likely to have soared. 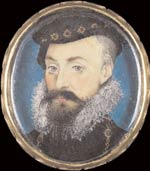 Robert Dudley, Earl of Leicester, by 16th century miniature artist Nicholas Hilliard
Louis Joseph died of a fever in 1789 when only seven, and for this reason there are hardly any portraits of him. Those that survive are very rare and highly sought after. Hence, in this case identity was absolutely vital. The depiction of rulers in miniatures is not confined to Europe. Miniature Painting in India too, is a centuries-old tradition. Some of the earliest works exist in the form of illustrations to the religious texts on Buddhism executed under the Pala Period (750 A.D. to the middle of the 12th century A.D.) in eastern India, as well as in the Jain texts executed in western India during the 11th and 12th centuries A.D. Currently, there's a growing interest in miniatures of Indian rulers-many of which were painted by European artists in the 18th and 19th centuries. The work of the miniaturist Ozias Humphry illustrates this trend. Humphry painted many prominent Indian potentates in the last quarter of the 18th century including that of Hasan Reza Khan and Haidar Beg Khan (ministers to the Nawab Vizier of Oudh, circa 1784), and Prince Jawan Bakht, the son of the last Mughal Bahadur Shah II. His work, and those of his fellow artists who flocked to India to meet the then increasing demand for western-style portraits, is now attracting the attention of collectors who are willing to pay good prices to secure an insight into a world which has long vanished. A portrait of Prince Bakht sold at Bonhams in 2006 for Pound13,000 (Rs 9.04 lakh).

Collecting miniatures is a passion like any other. Its fascination arises from an awe of the skill of the artist and the historical events associated with it. As with collecting of any nature, there is also the thrill of the hunt that is no different when it comes to these miniature marvels. And the overwhelming public response at the recent Bonhams auction only proved that this is still a most sought after area of collecting.