A Gorilla race, a feast by the river and the star-studded London Film Festival: London’s where it’s at this September and October. It’s still a bit wet in September and quite chilly in October, but since when has that stopped us from travelling for a bit of fun? And a lot of fun is what it promises to be, if you are in London this autumn.

There’s simply no missing this one if you happen to be in London in September. The Mayor’s Thames Festival, to be held on the second weekend of September between the Westminster Bridge and the Tower Bridge, is a spectacular, free-spirited celebration of London and the Thames river. The festival brings together Londoners as well as tourists to the very heart of the British capital to witness a plethora of performances and competitions, and if the figures are anything to go by, then more than three quarters of a million people attended the Festival in 2007, making it London’s largest open-air arts event.

This year, the Festival showcases cultural programmes from 37 countries, along with special performances from school children from all the 33 London boroughs. The event is expected to commence with a “Feast on the Bridge”, where 300 metres of banquet tables will be laid out for visitors to savour sumptuous delights. The festival’s riverside bazaar features over 350 international food and crafts stalls. There will be events celebrating Korean food and culture to coincide with the annual New Moon Festival in Korea, along with a display of crafts and music from New Europe (newer members of the European Union). The night carnival is expected to have over 2,500 participants and will conclude with a stunning fireworks display.

Attracting around 300 sailing crews from all over the globe, the Great River Race in London promises to have boats of all shapes and sizes on the Thames in a 22-mile marathon. This is one of the most prestigious events of its kind, attracting thousands of competitors. Started in 1988, the race is now described as a classic event by true racers and amateurs alike and promises an intriguing mix of colour, spectacle and intense competition. The race progresses from Surrey past historic landmarks until it reaches the London dockyard.

The race is open to any traditional-style boat powered by a minimum of four oars or paddles. But the rules are pretty strict. Each boat must have a cox and, in keeping with the watermen’s ancient traditional role as taxi drivers on the Thames, each boat must carry a “passenger”. The optimum speed of any craft competing is calculated by computer and no account is taken of the potential abilities of the crew. Boats leave the start line on a handicap basis, with the slowest boat leaving first. The handicap system is calculated so that in an ideal situation, all boats would cross the finish line at the same time. This year, a wide selection of trophies are up for grabs and competition is definitely hotting up. The Great Gorilla Run is a 7-km race through London. It has just one precondition: runners must be clad in full length gorilla costumes! This year, the race is expected to have around 1,000 participants, who will sweat it out on the streets for the special charity event. Entrants are provided with gorilla outfits, courtesy the Dian Fossey Gorilla Fund, and yes, you do get to keep them no matter how you finish. Though an out-and-out fun event, the race makes a serious effort to help these endangered animals.

The Gorilla Organization works closely with wildlife experts and the governments of Central Africa, helping preserve the rainforests and, thereby, protecting the gorilla’s homeland. The race celebrates its fifth anniversary this year. Over 3,000 people have taken part in the races so far, and over £1 million (Rs 8.2 crore approx.) has already been raised. The charity has also broken a world record of sorts for the biggest gathering of people in gorilla gear, which is no mean feat. 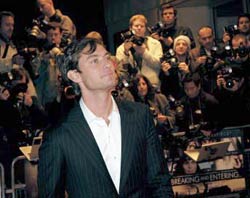 Jude Law: One among many stars to have graced the London Film Festival
Tom Cruise, Robert Redford, Meryl Streep, Sean Penn and Sienna Miller are some of the Hollywood stars who have graced the much-awaited annual London Film Festival in previous years. The Times BFI London Film Festival is UK’s largest public film event, screening over 300 films from 60 countries. The festival, currently in its 52nd year, is organised by the British Film Institute and presents selected new films from the full spectrum of world cinema, with an extensive schedule of public forums, education events, lectures and celebrity interviews.

The screenings are informal, but are preceded by question and answer sessions with the audience, allowing fans to personally interact with the cast and crew of films. The festival is divided into themes, which cover different areas of interest and is spread across different venues. In 2006, for instance, it was spread over seven venues in England and Wales.