Nightclubs Avalon and Pangaea raise the bar for nightlife in Singapore

All crystal and bling, nightclubs Avalon and Pangaea, raise the bar for nightlife in Singapore. Hitani Kaur parties at last year's debutants among the world's party hotspots.

Moshe Safdie's floating crystal pavilion which houses the two clubs within
Hitani Kaur
From pruned, perfunctory and almost submissive through the day, the city of Singapore magically transforms at dusk. That's when it ditches its unfailing order and discipline for a chaotic, spontaneous and almost manic after-dark existence.

Matching the fervour step-for-step, are two of global club culture's biggest brands, Pangaea and Avalon, the latest additions to the city's hectic nightlife. Their magic reverberates in the wee hours of the morning, a loud proclamation that the party is here to stay.

Earlier last year, I'd visited the Marina Bay Sands Hotel to witness the opening of their Art and Science museum. Looking out at the panoramic view afforded by the floor to ceiling window from my room on the 48th floor, I was able to see just what had changed in the intervening six months. My south-facing window, which had earlier opened onto a site inundated with cranes, churning machines and piles of dredged up debris; had transformed into a gleaming, angular crystal pavilion encasing the two international nightclubs. There's a newfound appreciation that comes with seeing what-had-been before what it becomes. 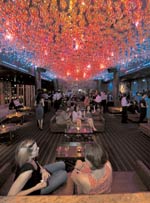 The glamourous interiors of Pangaea
But even the uninitiated would be unable to stifle the gasp that Moshe Safdie's structure evokes, more so because it is functional rather than merely ornamental.

Jutting out into Marina Bay, and connected to the mainland by a planked jetty, the crystal pyramid encasing both Pangaea and Avalon within its basement and doublestorey rise, makes you want to lean over and touch it just to be sure of its genius design. Pushing the envelope of futuristic architecture, it manages to remain within the bounds of aesthetic design. 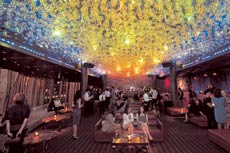 Interiors of Pangaea
Moving beyond the fascade, is a world as rich and shiny as its exterior. Think flashing lights, plush interiors, thumping beats, glitterati, and five-star service; the two US imports are a hedonist's rite of passage, and membership to the clubs is limited. With a lofty international reputation to live up to, both Pangaea and Avalon, despite sharing a common roof, are distinct in their statement, vibe and offering. While Pangaea positions itself as an 'ultra-lounge bottle club', Avalon contrasts as a 'dance club' with a lineage dating back to the 90s. Psychedelic laser projections
Our first stop for the evening was Pangaea, which is reached via an underwater tunnel flanked on either side by illuminated rods that constantly change colours. Upon entering the club, we were ushered in by hostesses in flowing gowns with Swarovski vines creeping over a single shoulder. They offered us dazzling smiles, champagne, and plied us with club trivia.

Despite their diva looks, it is the bubbled faux ceiling that really catches your eye. Like the illuminated rods in the tunnel, these too, alternate between shades of the rainbow. Tear your eyes away and you have a chance to take in the exotic wood elements, tribal mask ornaments (from owner Michael Ault's private collection) and genuine animal hides. A zebra-top bar running along the breadth of the club stocks every imaginable liquor brand, and though the space appears intimate, it claims a capacity of upto 400 guests at a time. If decadence and sophistication are what you want, Pangaea delivers. No surprise there, considering Michael Ault has been dubbed the International King of Clubs. Over the course of his 30 odd years in the business, the man has built and owned over 25 world famous nightclubs spanning across New York, Sao Paulo, Marbella, London and now Singapore-the one he claims is 'the pinnacle of his professional efforts'. Flying in world famous DJs to work in concert with musicians, drummers, and dancers, Pangaea is a sanctuary shielding you from anything less than perfection. But once you've soaked it all in, move to Avalon to stir things up, for insanity has no place within the laid-back walls of Pangaea.

Contrasting Pangaea's elegance, American nightlife veteran, Steve Adelman's Avalon is brash and unabashed. Service is far from impeccable, so don't expect a continuation of the VIP treatment at Pangaea. Consider yourself privileged if you make it in, because like all new places, it attracts serpentine queues every weekend that are hard to bypass. Get your stamp, and the short walk across the jetty to the main entrance is all the fresh air you are likely to get that night.

Once you step in, you're swallowed by the thumping beat, dizzying laser show and frenzied movement of party-goers. It really is everything you want a crazy night out to be, and then some.

The music is a cross-over of different genres-electronic, rock and hip-hop merge as they're belted out over a state-of-the-art system where the music bounces off the glass shards of the crystal wall to create a cocoon of deep, cushioned acoustics.

Spread over 12,000 sq. ft. and two floors above ground, filling up the space is a non-issue considering the club's track record. The ground floor features a sunken dance floor lined by private alcoves of cushioned semicircles, but the dancing's not limited to this space alone. Though there's enough room for mingling along the illuminated bar, the intensity of sound and energy leaves you with no choice but to leave the gossip session for later, and join the party. Adelman, whose dance clubs are known for attracting Hollywood bigwigs, has tried to deliver a spectacle which is a step ahead of its time. His statement is bold, "more than giving people what they want, we want to be delivering what they will want". So far, his claim seems to have been achieved, whether or not it can be sustained, only time will tell.

Combining their international brand value with Marina Bay Sands' monopoly over the hospitality scene, both clubs have exploded on to the international stage. Matching the city's non-depletable energy levels, and raising them a notch, they have added a new dimension to Singapore's nightlife.

Once you step inside the crystal pyramid, you're swept up into a whirl and it's hard to tell what's on the outside. So while there are plenty of other spots that acquaint you with the local flavour of the city, this isn't one of them. Right from the live acts, the service, the thronging clubbers and even the decor; every aspect maintains the franchises' international standards.

Party capitals like New York and London now have some spanking new competition from Singapore.