A present-day street view of the Fairmont Peace from the Bund
Once dawn has broken, the skyline of Lujiazui, the downtown financial district in Pudong, is blurred by a winter haze. The initiatory awe the first-time visitor to Shanghai is obligated to feel also dims with the low light. Highways, knotted and furled like bows, circle densely bunched apartment complexes with their gabled and gilded roofs. This is not a city, it's hubris manifest.

It's hailed as 'the Paris of the East, the New York of the West', for which the only evidence I spot is a crowned edifice that looks like the flowery offspring of the Statue of Liberty and the Chrysler building (the Westin hotel, I find out later). On first acquaintance, Shanghai is bigger, faster, showier but not better, surely not better than the deeply steeped history of Beijing, or even the uneven meld of ancient and modern in Suzhou. There is perhaps some misplaced patriotism mingled into this impression; India's growth story never grew this tall. 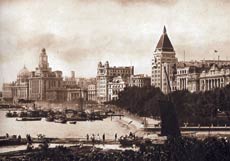 The Bund with the Peace hotel in the foreground, in 1930s Shanghai
And then I arrive at the Bund. The colonial architecture, a mix of neoclassical opulence arranged in art deco symmetry tugs at oft-played heartstrings. Here lies the familiar, though given it's in Shanghai, on a scale hitherto unimagined. Running along side the Huangpu river the area is named after the Hindi word for embankment.

The word, along with opium, was imported by the British and thrust upon the Chinese. After a brief resistance, the Chinese yielded and the Treaty of Nanjing with clauses for open ports and concessions for trade followed. Various international powers established districts within which they operated, and the Bund became the British holding. The soaring, symmetrical art deco lobby lets in natural light through the original stained glass.
Being on the Bund is the easy induction to Shanghai. It's removed by a river from the Pearl Tower, the World Financial Centre and the other impossibly high buildings that aren't just billboards for the city's frenzied rise, but transform into actual, gigantic, digital billboards once night falls. The boulevard in stark contrast has a langurous feel to luxuriate in, boutiques withdrawn into inner recesses, a wide promenade by the waterfront.

In industry parlance, hotels are often referred to as 'properties', a tip of the hat to the prime real estate they often occupy. And if the winning combination for the real estate slots always rings up 'location, location, location' then the Fairmont Peace Hotel has already hit the jackpot. As we swing on the Bund in its calm sweep past the Huangpu, I find myself wishing that the tall, distinctive building with the green turreted top is the hotel I'm headed to. I should have asked for a million bucks instead. The classically rendered Indian suite offers a typical Shaghai view from its windows
The 1929 hotel reinforces the Indian bond to the Bund. It was built by Victor Sassoon, whose family fortunes were made on the Indian peninsula then sunk on Shanghai shores. After the founding of the People's Republic in 1949, as Sassoon left China, he is reported to have said, "I did for Bombay, and Shanghai's done for me." 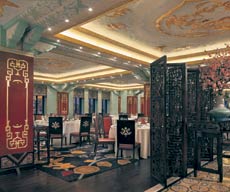 True to its name the Cantonese restaurant, Dragon Phoenix, has risen to new glory under the Fairmont banner
Jenny Liang Peach is the repository for these and other factoids, in her role as the hotel's indefatigable heritage director. The Fairmont Peace is one of the very few hotels in the world that can entirely justify the full-time employment for a heritage specialist. Its story dips and swoops in an evolved metaphor for the young city's own history. In the 1930s, Sassoon cut a sharp figure in the erstwhile Cathay Hotel. He built it anew and requisitioned the oakpanelled penthouse with 360-degree views of a city in flux. He played gracious host to distinguished celebrities and engaged entertainers for them, including musicians for the low-beamed and utterly bona fide American-South jazz bar, where 'ole timers' still play a mean sax. His hotel was futureforward; the first high-rise on the Bund, the first with two elevators, and the first to have central air-conditioning.

Everyone who was anyone arrived in Shanghai, and marvelled at the hotel's modernity. In its post-revolution avatar as a bleak office, the multiple-storied octagonal, art deco central atrium was split into cubicles on two levels, and the stained glass covered by gypsum board. In 1956 it was revived as the Peace Hotel, albeit without its former splendour. The Fairmont's renovations, extensive, expensive and authentic, took three years. When the hotel welcomed guests again in 2010, this Shanghai story found a fitting flourish. 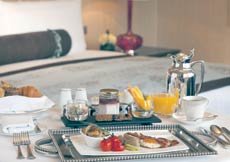 The in-room dining menu serves a lavish Chinese or international breakfast spread
Scratch the surface of the Fairmont Peace and you'll discover layers of time. Shanghai reveals itself slowly, but a modicum of its hidden heritage can unfurl from within the confines of the hotel. Begin the quest at the hotel's museum gallery tucked into a clandestine nook on the mezzanine floor. Discover a secret stairway in the long lobby hall and figure out where it goes to. Even the iron grills are so beautiful, it's easy to forget they double up as radiator covers. Many of the original features, the wood, the windows, have been retained, restored or meticulously reconstructed.

If the hush of history gets daunting the Peace offers ample retreats into modern conveniences. Each room has an Illy espresso machine with adorable custom-made Pedro Almodovar cups. While the etchedmirror doors of the bathroom open to a good old fashioned claw-footed tub, an inset LCD panel with a waterproof remote upgrades and updates the experience. There's free wi-fi for guests who opt for the Fairmont Gold upgrade and all the hotel's many amenities are accessible with the touch of a button.

The hotel overlooks Lujiazui, and the blare and glare of downtown acquires an impossibly romantic hue framed in its picture windows. In a tip of the hat to its etymology, the Peace buffers Shanghai shock and readies visitors for the spectacular, swinging surprise that Shanghai is.