The man who launched a million colourful striped shirts, Sir Paul Smith gets nostalgic about setting up shop in London in the 70s and about finally being cool with the multi-millionaire clothing impresario tag.

The fascinating and creative Sir Paul Smith
For all the international adulation, rockstar aristocracy (Eric Clapton and David Bowie are pals,) and the eccentricity that comes with the ingenious, Sir Paul Smith is refreshingly simple. At 65, he is a ball of energy, bouncing off his office walls in Covent Garden, London; almost like a kid on a sugar rush. He is one of the most influential names in global fashion and a legend in Britain. He was conferred the Outstanding Achievement in Fashion Design honour at the annual British Fashion Awards last November. On receiving this his acceptance speech had the same nonfussy, humble light-heartedness that has come to define this gentleman and his creations. "The thing I'm most proud of is continuity; the fact that I've always done ok. I've never been number one or today's flavour. But I'm reliable, polite, and I deliver clothes on time that are well made at the right price," he says. 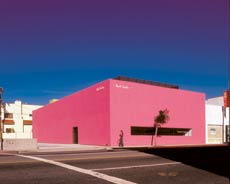 The fuchsia pink. Minimalist shop exteriors of the Paul Smith store in LA.
For a designer who is just 'ok' at his job, Smith has managed to run and expand his eponymous label, with a turnover of more than Pound 300 million, rather well. His humility is rare in the diva world of design. But then again, Smith's entry into the fashion world doesn't read like the stories of most designers. He didn't pore over fashion magazines or make clothes for dolls at the age of eight, while his classmates played football. His boyhood dream was to become a professional cyclist. Unfortunately a serious cycling accident shelved 17-year-old Smith's biking aspirations and directed his effervescent energies elsewhere.

It was in the following six months in hospital that his future as a designer started to take shape. "At that time I met a lot of interesting fellow patients, many of whom were part of creative industries and worked with graphic design, architecture or fashion. This world began to fascinate me and I found myself drawn towards it," he reminisces.

Soon he found himself running errands for Harold Smith, his father, for the family-run clothing ware house in Nottingham. So just meeting some colourful strangers roused the desire to design in him? There's got to be more to it. A clap of thunder, a dash of inspiration, maybe? "Good ol' conversation is timeless. That inspires me," says he, as he continues, "I believe a conversation can spark off an idea and send you in a really exciting direction that you might not have considered before."

There's an interesting lifelesson hidden in these words: The 'fellow patients' in the hospital later caught up again at a local pub that was popular with the students from the local art college. Smith during his early days in Nottingham as a designer
They talked about Mondrian, Warhol, Kokoshka, David Bailey and listened to the Rolling Stones, and Miles Davis. "It was then that I knew I wanted to be a part of this world of ideas and excitement," he says. The rest, as they say, is history written across four decades and 12 different lines-from womenswear, menswear, childrenswear, to watches, footwear, fragrance and eyewear.

"Moving from my hometown in Nottingham in the 1970s and opening my shop in Covent Garden, London was a big yet fulfiling move," he recalls, "Being important in a provincial city feels great but it stops being challenging after a point." And London in the 70s was alive with a newfound and glorious hedonism, revelling in technicolour, and rock and roll. The unmistakably English interiors of the shop in Brook Street, London
The setting both helped and challenged Smith to bring out his creative genius in flying colours. William Gibson, the American novelist and a fan of Smith's work, understands the seming artlessness of the Paul Smith design sensibility, "It is as though he possesses some inner equivalent of the Houndsditch Clothes Exchange-not a museum, but a vast, endlessly recombinant jumble sale in which all the artifacts of his nation and culture constantly engage in a mutual exchange of code," Gibbon once wrote. While the phrase 'classic with a twist' is far overused when talking fashion, Paul Smith's creations truly epitomise this ethos.

From the classic formal shirt reimagined in Smith's iconic, bright-coloured stripes, to the spotted jumpers in his PS collection and his take on colour-blocking in one of his latest runway offerings (images above). Smith's latest collection is very textural and quite muted with a few punches of brighter colours such as coral, mustard and red. This is paired with simple tailoring, layered with chambray shirting and chunky knits. The spring/summer 2012 accessories' collection (think a slouchy canvas holdall with leather-trim detailing or a feathered straw fedora hat) have a perrenial appeal to them that are playful little touches to everyday wear. Smith constantly demonstrates a spark of eccentricity that updates the great British sartorial style.

His passion for individuality, yet a grounded sense of self also comes across in his 'shops'. He calls them that because he still feels "like the owner of my first shop in Nottingham (a 12 sq ft, windowless affair) rather than a fashion designer." But the locations are far and wide: Los Angeles, Tokyo, Hong Kong, Toronto, Dubai, London, Antwerp, New Delhi, Bangalore; each store different from the other. Apart from housing some very coveted threads these boutiques are also home to an extensive selection of jewellery, books, art, antiques and an array of interesting products.

Interestingly, for an archetypal British label, the majority of Smith's business comes from Asia, where the label enjoys a cult status. Japan itself has 200 Paul Smith shops. As for India, he is currently warming up to the country and its fashion sensibilities. "I'm positive about the future," he says. These shops reflect Smith's personal character and his design aesthetic; an unmistakable Englishness augmented by the unexpected.

Like any other public figure, some days are bad, others fabulous. There's a lot of travelling and making time for family. So how does he keep it together? He fondly credits it all to his wife, Lady Pauline Smith. "My wife has never allowed me to think that I am more important than I am and she has always pushed me to make the best of what I do." Behind every successful man, they say.