Sports tidbits from around the world

Fast cars, bikes and boats. Sports tidbits from around the world.

The 2012 World Rally Championship season kicks off at Monte Carlo in Monaco.
WRC 2012
On the Monte Carlo Track
The 2012 World Rally Championship season kicks off at Monte Carlo in Monaco, after a three year absence from the venue. This 80th Rallye Automobile Monte-Carlo, also marks 101 years since the event entered the race calendar. Monaco has a well-deserved reputation as a testing course for drivers. Formula One fans know it for the notoriously tight turns and emphasis on fast reaction times. The rally is no different. This early in the year, it's not uncommon to find snow and rain in some areas. However, drivers can't rely solely on wet tires thanks to several miles of dry tarmac as well. Not surprisingly, winners of the Monte Carlo rally have earned themselves and their teams plenty of publicity over the years. Sticking with tradition, the 2012 rally will begin in Valence with special stages in Ardeche, Haute Loire and the Vercors mountains. In all, more than 430 km of special stages have been planned with some 1,300 km of link roads. 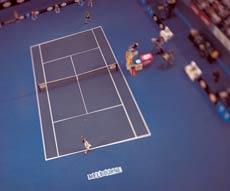 The 2012 tennis Majors' calendar kicks off
Grand Slam Season
The 2012 tennis Majors' calendar kicks off, as always, with the Australian Open. This year, Novak Djokovic returns to defend his crown. After a successful 2011, which saw him become World Number One for the first time, he definitely has his work cut out in the new year. His chief rivals - Federer, Nadal and Murray - are close on his heels. Women's champion Kim Clijsters is not at the top of her game at the moment, but fans will no doubt look forward to seeing her return to the hardcourt. 2012's Australian Open takes place from 16-23 January in Melbourne. Cyclo-Cross race
Not Your Usual Bike Race
Never heard of cyclo-cross? Don't worry. The sport's following is limited largely to Europe's major cycling nations - The Netherlands, Belgium & France. Think of it as a cross between BMX-biking and trail running. A typical course is between 2.5 and 3.5 kms long and sees cyclo-cross athletes racing over sand, grass, slush and tarmac. Some parts - "legkillers" - are so steep riders have to dismount and run with their bikes uphill. The average race lasts 30 agonising minutes. The course for the 2012 championships has two dunes, Herygers dune named after the 1994 winner Paul Herygers and Dune X, which will be named after the 2012 winner. The event takes place in Koksijde, Belgium on January 28 and 29. World Speed Skating Championships
Imagine racing across half a kilometre in just 34 seconds. That's speed skating for you. The Jamaican sprinting sensation and current 100m record holder Usain Bolt would have to run nearly twice his fastest-ever pace to keep up. Speed skating races are held over 500 m, 1 km, 1.5 km, 3 km, 5 km and 10 km distances. At the highest level, average speeds in a 500 m race can easily cross 50 km/hr. Top speeds however, can go up to as high as 60 km/hr along the straights. All that separates the racers from an injury is a streamlined helmet and a thin bodysuit. Both are designed more to cut down on wind resistance than offer any serious protection in case of a fall. Even the skates are virtually unforgiving. At just 1 mm thick, even the slightest shift in balance could dramatically cut down on speed, or worse. The 2012 World Speed Skating Championships are being hosted by Calgary, in Alberta, Canada. They will take place between January 28 and 29.