Flying south is for the birds. This time, skip the sun and sand for a glorious tour of these frosty yet exquisite European cities that truly define the winter wonderlands. Vacation like never before; it's Christmas after all.

Anindita Satpathi/Anindita Satpathi
To revel in the most sublime of seasons at its untarnished best, set your sights on the big chill in Europe this Christmas. Sounds crazy? There's nothing quite like long walks with your breath frosting over; having hot chocolate and churros at cosy cafes; basking in the spirit of a European Christmas. As the year draws to a close, the unbridled manifestation of the festive spirit is just one of the many factors that make these tried and tested destinations conducive to a winter trip. Warmly embrace winter's bitter beauty and grab every opportunity to mingle with the locals, feel the vibe of the place and while away your time at museums and castles in relative solitude.

As a tourist in winter, you are far more likely to receive kindly suggestions on food and lodging and get invited to partake in traditional Christmas rituals. Instead of being just another drop in a sea of clamouring tourists, embrace your surroundings and become one with the indigenous population for a day or two.

However, with temperatures hovering way below 0 degree Celsius, come armed with enough parkas and ear muffs to ensure that your trip is a breezy jamboree, and not an icy misadventure. The hip flask is also recommended. 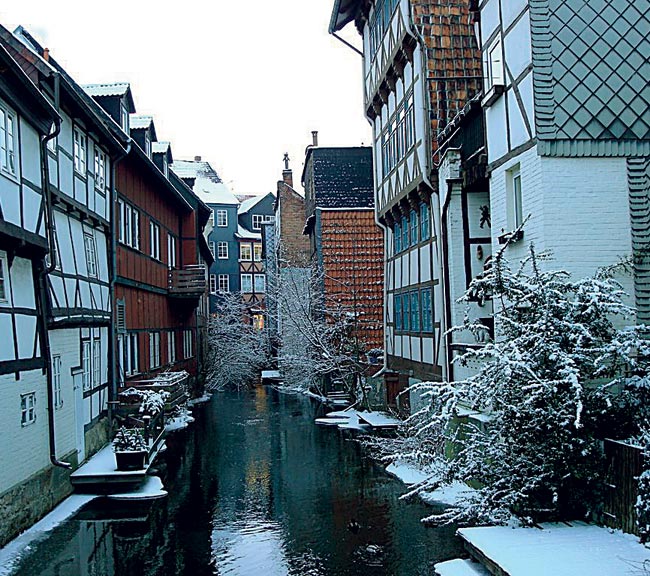 In Venice, time trickles down to a fine stream till it evaporates and settles into foggy wreaths that mournfully envelop its canals - virtually suspending you in time. The otherwise bustling city, famed for its gondoliers and passionate rendering of springtime romance, gets shrouded in mist during winter - when land and water seem to merge.

Bathed in the muted grey morning light, the city opens itself up to the chill and revels in its frosty solitude - a luxury that allows you to take a leisurely gondola ride back to your hotel without jostling for space on the waterways as is the case in summer. Open your windows to a pale grey morning to be confronted with the ethereally beautiful sight of acqua alta - a winter phenomenon where the high tide rolls into town and submerges the low-lying areas of the city.

Here, you may explore the tranquility of the lesser-known churches; only, you must not hesitate to lose yourself in the labyrinth of bylanes and toss back a few un'ombras (the measure of wine in Italy). Venice is famed for its sea food, especially cicchetti - customised bar snacks - frothy salt cod, tiny, marinated octopus and fried sardines.

Head to St Mark's Square after dark - where cafe orchestras duel for your attention - and lose yourself in the music, or just settle for one of the many Vivaldi concerts held in churches. Spend long, luxuriant afternoons visiting house-museums and marvel at the idiosyncratic yet extensive acquisitions of lone collectors.

Lose yourself in this quaint winterland and succumb to the lull of lapping water that speaks to your soul when the hordes are at bay.

To Stay: Hotel Palazzo Stern (starting from Euro 200)
Eateries: Sample La Caravella's full-bodied dishes - sliced beef entrecote and thick pasta with a duck ragout - are a treat for the taste buds. Cafe Florian, which has the distinction of being Italy's oldest cafe, is perfect for a lazy afternoon. Every winter, the cosmopolitan Viennese culture scene brims, overflows and spills onto the streets, before wafting through the air in a heady twirl. It's with opulence that this city - which lives and breathes art - heralds Christmas and the gamut of cultural events that culminate in the annual Viennese ball season.

Few cities bear testimony to the spirit of camaraderie, as seen on New Year's Eve in Vienna. A mile-long trail kicks off with fireworks from the City Hall and stops at DJ stands and kiosks that fuel the party with drinks.

Head to a 400-m slope illuminated by huge floodlights in Wienerwald woods to ski by night. Once you have had your fill of the frost, treat your stiff bones to a heartwarming cocktail of apple strudel, rich chocolate Sachertorte and live piano music at the Cafe Sacher.

Opera, waltz and jazz hold sway in Vienna's culture circles, but there is also a gracious incorporation of ballet and rock in numerous concert performances lined up from November to December. You can be forgiven for thinking that the Vienna Ice Dream is magical; an ice rink by day, it turns into a pulsating discotheque after dark.

Brush up your dancing skills before the lavish ball season starts in January and keep a tuxedo handy for an exquisite rendition of the Blue Danube, composed by Johann Strauss II, at Hofburg Palace.

On the first morning of the New Year, shake off that hangover by participating in the Loony Dook, a tradition where hundreds plunge into the icy waters of the river Forth.

To Stay: The Ring Hotel (starting from Euro 230)
Eateries: Sample Cafe Gerstner's delightful art brunch and, at Cafe Halle, try out the braised fillet of shark and roasted lamb made in true Greek style. 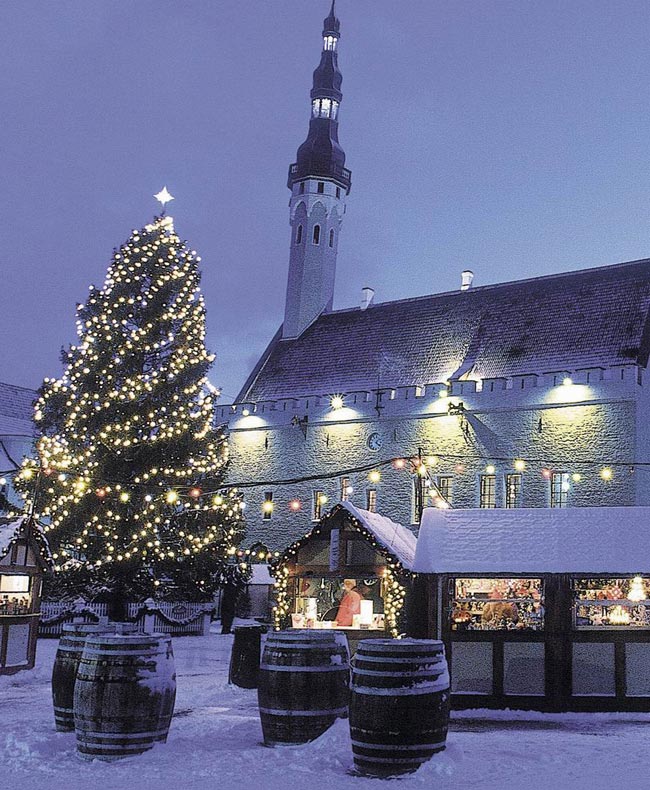 In Tallinn's medieval old town, which could convincingly pass off as the culmination of a time-travel experiment gone surprisingly right, running into a posse of 14th century Vikings is not a very remote possibility. But, be warned, you are more likely to find that the 'Norsemen' are actually a couple of costumed Britishers with a highly evolved sense of humour.

The opulent grounds of Peter the Great Kadriorg's palace surrounded by snow-laced oak and horse chestnut woodlands makes the perfect setting for the Tallinn Light Festival, which it hosted a few years ago. This heartwarming community-contact festival reinvents street corners as cultural spots with innovative street lighting, and combats dreary winter nights by drawing on deep, pagan roots to juxtapose warmth with cold.

Now, the rosy-cheeked inhabitants of the town may look at you with shock when you tell them that you want to see Tallinn at its enchanting best (read, winter), but it beats being surrounded by hordes of tourists incessantly documenting every nook and cranny of the ornate ramparts and cornices. And, why not? The candle-lit cellar pubs here heartily welcome every frostbitten traveller, and you don't need an excuse to duck into an art-deco patisserie to warm your hands on a steaming cup of spiced hot chocolate.

To Stay: The Three Sisters (starting from Euro 400)
Eateries: Sample the hot chocolate at Cafe Chocolaterie de Pierre - a spicy mix of melted chocolate, cream, rum and chili - is arguably the best in town. Kompressor specialises in comfort food such as pannkoogid (pancakes) of the savoury and sweet kind.

Budapest - stretched at the seams from the sheer magnitude of cultural soirees, parties, jazz and dance performances and boat dinners - keeps its nerves below breaking point with the calming spray of its natural thermal waters; one of the key reasons to visit in winter when the outside temperature is below freezing point.

The resplendent buildings, a legacy of the Ottoman rule, are sprawling structures that house steam rooms and the main bathing area, comprising stained glass atriums and outdoor swimming pools where you can play chess in the midst of a comforting spray of steamy water.

The 500-year-old Rudas Thermal Baths, dappled with light streaming through an exquisite stained glass-domed ceiling, turns uber-cool by night - playing host to the occasional sparty, a spa-cum-party that would beat any regular beach house bash.

After you've sampled this aspect of Budapest's charm, head to Europe's largest skating rink in the sprawling park - Vrosliget - and behold hundreds indulging in an activity that has endured since the 19th century. Nip into a trendy coffeehouse on the Pest's swankiest boulevard, but keep some time aside for the 'ruin pubs' - abandoned building lots renovated into exotic thrift shops that exude a casual hipster vibe. Sample the cafe culture in Budapest with hot mulled wine and tower cake.

The annual Christmas market may be a crowd-puller, but don't dismiss it as just another frenzied holidayer's souvenir grab spot. Sitting pretty in Vrsmarty Square from November-end to Christmas, this market features delicate, handcrafted folk art items that are believed to be the best in Europe. Go ahead, pick up a few for your family and friends!