Tired of the same, tourist traps? For travel experiences with a difference? Here's our pick of the top four luxury adventure holidays that will redefine vacations in 2012. Swimming with Sharks
Jumping into ice-cold water with a great white shark is something completely against man's primal instincts. But a company in Gansbaai, South Africa, wants you to do just that, albeit from the safety of a steel cage. For about $200 (including transport), you can book yourself aboard a catamaran that takes you straight to shark alley, five miles off the mainland. Once the sharks have surrounded the boat in a feeding frenzy, you get into the cage and begin your experience. After a thrilling day at sea, unwind by sinking deep into the lap of luxury at the Birkenhead House in Hermanus. With excellent food and other services on offer, enjoy the beautiful view from your room ($1,000 per night) as you recap stories of shark encounters.
Great White Shark Tours
Phone: +27-83-300-2138;
Fax: +27-28-312-2766, Website: www.sharkcagediving.net;
Birkenhead House, Phone: +27-28-314-8000; Fax: +27-28-314-1208; birkenheadhouse.com 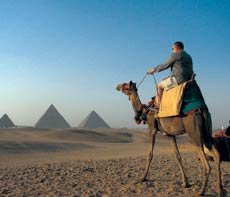 Lawrence Of Arabia Redux
It's sunset on the Giza plateau. You've completed a climb to the Great Pyramid, and you're racing back to the Churchill Suite at Mena House. What awaits is a party to kick off your two-week-long Arabian adventure. Forget the standard cruise down the Nile. This tour will show you Egypt in a brand new light. Set sail aboard the presidential suite of Abercrombie and Kent's Sun Boat IV, guided by the country's most informed Egyptologist (and A&K's best guide), Azza Ammar. Along the way, you will dine privately within the walls of the Luxor temple and enjoy spectacular views from a hot air balloon over the Valley of the Kings. What more can you ask for?
Contact: Abercrombie and Kent's Egypt/Jordan Destination Expert Cindy Fernandez,
Phone: +630-954-2944, ext. 362; Fax: +630-954-3324;
Email: cfernandez@abercrombiekent. com; abercrombiekent.com Gorilla Gazing
Seventeen years after one of the world's worst genocides, Rwanda is now one of Africa's fastest-growing economies. It's also home to one of the planet's rarest species, the mountain gorilla. The journey to the gorillas' lair isn't easy. It cuts through thick forests, set on steep, muddy hills. But the effort of the hard trek melts away once you come face to face with a giant silverback and watch him pound his chest. Better yet, the Rwandan government guarantees exclusivity. Only 40 people are taken to the mountain each day. That quota is further divided into 8-people expeditions that are assigned to one of five gorilla groups. After an exhilarating day with these magnificient animals, travellers can take a night halt at the Nyungwe Forest Lodge. This luxury hotel is located on a picturesque tea plantation right on the edge of the Nyungwe rainforest. The forest is home to more than 13 species of primates including our closest cousin, the chimpanzees.
Cox and Kings Safaris
Contact: Africa Product
Manager Jeanie Fundora
Phone: 813-258-3323;
Nyungwe Forest Lodge, Phone: 27 -41 407 1000; nyungweforestlodge.com