News
Magazine
BT500: India's Most Valuable Companies
HDFC Bank has emerged as the top lender on the BT 500 2022 list. Here's why

Riding on the overall growth in credit and robust asset quality, HDFC Bank has emerged as the top lender on the BT500 2022 list. But even as analysts are bullish about the sector heavyweight, its stock seems to be under pressure

Analysts point out that since MD & CEO Sashidhar Jagdishan took over, HDFC Bank has not missed the numbers in a single quarter

A large balance sheet. Strong net worth. Complementary strengths. These are factors that generally excite both market analysts and investors. But strangely enough, they didn’t work for HDFC Bank if its stock price is any indication. Despite that, HDFC Bank is once again the top-ranked lender in this year’s BT500 list—based on the average market cap during the October 2021-September 2022 period.

But let’s start at the beginning. On April 4, 2022, HDFC Bank (No. 3 on the BT500 2022 list) announced that housing finance major HDFC Ltd will be merged into the bank to create an entity “that would allow greater flow of credit into the economy”. This didn’t come as a surprise as the move was widely expected in banking circles. Yet, since April 4, shares of HDFC Bank have lost around 2.6 per cent (till November 18) while the benchmark S&P BSE Sensex has gained 1.74 per cent. The S&P BSE Bankex—the sectoral barometer for banks—is also up 10.16 per cent in the same period, indicating that most banks had a good run on the bourses since April this year.

But for HDFC Bank, the past two years have been rough as its stock underperformed the Sensex by a wide margin. For instance, the Sensex was up nearly 30 per cent in 2021 while HDFC Bank’s shares clocked gains of just 3 per cent. That’s not to say that HDFC Bank—incorporated in August 1994 and which, as on June 30, had nearly 6,500 branches and 19,000 ATMs across 3,226 towns or cities—is a perennial laggard. As recently as 2019, its shares had gained nearly 20 per cent when the Sensex had moved up by around 15 per cent. And that wasn’t the only time when its stock outperformed the BSE in a calendar year. 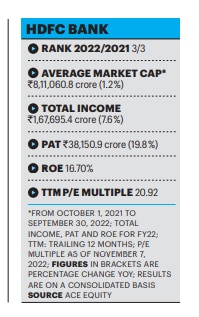 Coming back to the list, HDFC Bank’s average market cap grew just 1.2 per cent year-on-year during the study period—the lowest among all banks on the list. In the same period, private sector rival ICICI Bank saw its average market cap rise nearly 31 per cent, while public sector giant State Bank of India (SBI) registered a rise of nearly 42 per cent.

The bank, however, believes it has a role to play in the Indian economy, which assumes significance due to the high expectations on India’s growth in the coming years. “We are well-positioned to capture the expanding growth in loans with a complete suite of products that caters to wholesale, SME as well as retail customers,” says Srinivasan Vaidyanathan, CFO of HDFC Bank.

The CFO points out that while the liabilities of the housing finance entity will mature over time, the bank’s enhanced deposit mobilisation and expanded branch network backed by improved sales processes will help it fund the additional liabilities. “Post-merger, we would have one of the highest capital adequacy ratios [among banks in India] and may not need to raise funds immediately,” says Vaidyanathan.

Then what ails HDFC Bank? Even though it has been a consistent wealth creator, its stock seems to be under pressure.

BULLISH, BUT WITH A CATCH

Analysts remain bullish on HDFC Bank, with many having a buy call and a price target that is notably higher than its stock’s current market price. But this comes with a wait-and-watch caveat due to the merger in progress, which is expected to be completed by Q2FY24.

Harendra Kumar, MD of Elara Securities, believes three key factors are currently weighing on the stock. “The first is the combined company’s weightage in the index. Second is the management transition. Third, regulatory strictures related to its IT outage and credit card business,” he says.

Kumar says that analysts were used to seeing Aditya Puri at the helm for nearly three decades. After he retired, Sashidhar Jagdishan took over as MD & CEO. “It’s a credit to Jagdishan as there has not been a single quarter when it [the bank]has missed the numbers. But people might want to wait for a few more quarters before they get full confidence [in Jagdishan],” he says.

Incidentally, stock exchanges are mulling a change in the index rebalancing framework to avoid a situation where the HDFC twins have to be excluded from the benchmarks before the merger and be included again once the merger is complete, as that will lead to a huge amount of unnecessary churn in index funds.

“HDFC Bank will become one of the top banks globally. This is important because if we are talking about a $5-trillion economy, then who will cut the ultra large-sized cheques apart from SBI? Post-merger, HFDC Bank will be able to grow exponentially because of its size, a factor that will be missed in other private sector banks,” says Kumar.

Another positive, analysts say, is the fact that the merged entity would enjoy a significantly higher weightage in the MSCI index compared to what HDFC currently has.

Meanwhile, analysts who have interacted with the management recently say the bank seems to be confident of growing consistently at a rate of 18-20 per cent. “Scale benefits, longevity of retail loans, room to grow unsecured loans, uncompromised profitability despite large acquisitions, cross-sell benefits to potential home loan customers and large net worth for the wholesale business are the immediate benefits of the merger,” says Bhardwaj. 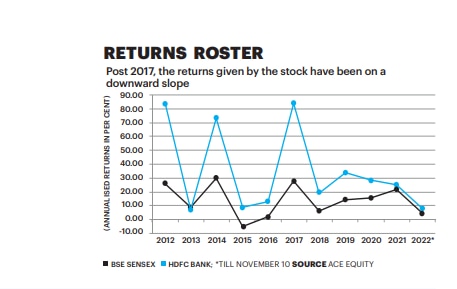 Vaidyanathan is betting on the fact that the power of bundling will also drive deposit growth as a large chunk of HDFC customers do not have an account with HDFC Bank. He says that housing is going to be one of the key drivers of the Indian economy over the next decade and home loans are going to be a big factor in that story. The CFO adds that home loan customers usually keep deposits that are five to seven times that of retail customers, and coupled with their longer tenures, they lend strength to the balance sheet. “Since about 70 per cent of HDFC Ltd’s customers do not bank with us, the size of the opportunity is huge,” says Vaidyanathan. The merger, he adds, is “a win-win for both entities” and HDFC Bank believes that it will present “far more opportunities than challenges”.

Despite the near-term challenges, HDFC Bank has interesting days ahead, and the analyst and investor communities will be closely watching its every move.