Cross-badging,or selling the same car with cosmetic changes under different brand names, has not worked so far in India. This case study looks at where the problem lies: is the strategy at fault or the execution?

VW Vento and Skoda Rapid
N. Madhavan
Executive Summary: Cross-badging,or selling the same car with cosmetic changes under different brand names, has not worked so far in India. This case study looks at where the problem lies: is the strategy at fault or the execution?

Turn to sedans. In August 2012, Nissan's sedan Sunny sold 2,757 units. In September that year Renault launched its sedan, Scala. By February this year Sunny sales had fallen to 1,191 units, while Scala sold 620 units. 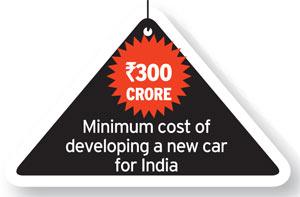 And guess what? Nissan and Renault are not even competitors. They have been strategic partners since 1999. Micra, Pulse, Sunny and Scala are all products of the Nissan-Renault alliance.

Or take German car manufacturer Volkswagen's sedan Vento. It sold 3,474 units in India in October 2011. A month later, carmaker Skoda launched its sedan Rapid. Vento's sales have since fallen to 1,909 by February this year. Once again, Skoda is part of the Volkswagen group - Vento and Rapid are from the same stable.

In fact, Micra and Pulse are essentially the same cars, with some cosmetic differences, made in the same factories, but sold under different names. So too are Sunny and Scala, or Vento and Rapid.

Welcome to the strategy of crossbadging , or selling the same car under different brand names - a concept new to India, but used for decades in the United States and Europe to boost sales. 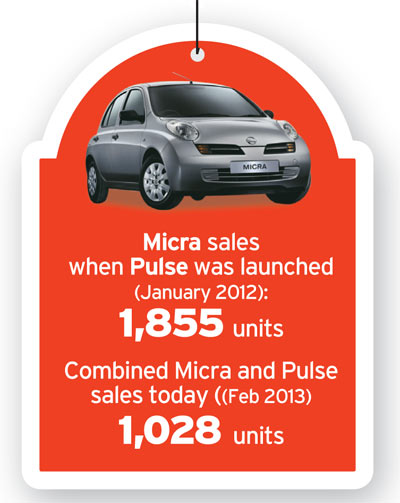 "Automobile makers resort to cross-badging to save on engineering, design and product development costs, to achieve economies of scale, to reduce the lead time in bringing a new product to the market, and to widen their product portfolio and get better returns with incremental investment," says Vijay Kakade, Director, Automotive and Transportation Practice, Frost & Sullivan. It costs at least Rs 300 crore to develop a car for India. But cross-badging requires merely tooling changes - an investment of less than Rs 20 crore.

It would have cost Renault India a lot more time and money to develop a compact car, or a sedan had it chosen not to cross badge Nissan models."

But does it? In India, both attempts so far have been failures. Cross-badging did not expand the market; on the contrary, it shrank. "The extent of failure is such that the combined volumes of Scala and Sunny's sales in February this year was 1,811 units, which is lower than the number Sunny alone sold - 2,757 units - before Scala was launched," says Kakade. The same is true for the Nissan-Renault products. While some attribute this to the slowdown, which is squeezing the entire industry, a closer look at the numbers shows that the fall in sales of the original brand is far higher than the overall decline in the market.

Why has cross-badging not worked? Examples from other countries have established that brand loyalty is critical to the success of cross-badging. But neither Nissan (nor Renault) nor Volkswagen have been around long enough in India to win the fierce brand loyalty that cross-badging banks upon. Worse, while a fully loaded Micra costs Rs 5.61 lakh today, a Pulse with similar features is priced at Rs 5.76 lakh. Few will see sense in paying more for essentially the same car simply to flaunt the Renault label.

The same applies to the sedans, Scala and Sunny. Volkswagen did the opposite, pricing Skoda's Rapid lower than Vento. But that left Vento customers feeling short changed, apart from lowering the resale value of both cars.

There may have been some gaps in communication too. "Crossbadging offers clear value to car manufacturers but what about the customers," says Abdul Majeed, Partner and Leader- Automotive Practice, PwC. "It is very important to communicate the value proposition to the consumer."

Others claim the Indian market is not yet mature enough for this particular strategy. "Indian customers have not evolved to a level where they understand the nuances of cross-badging," says B.V.R. Subbu, automotive entrepreneur and former President, Hyundai Motor India Ltd. Not only is the Indian consumer primarily value driven, but the auto market is also highly competitive with well entrenched and aggressive players.

There are no shortcuts like crossbadging to brand building, large investments are essential. "It is financially prudent and more effective to spend heavily on developing one brand," adds Subbu. He feels Renault and Nissan would have fared better if they had common dealerships and service centres and had sold their respective brands under the one roof rather than cross-badging each other's products. "It is a strategy that is best avoided in India," he adds. Nissan itself is alive to crossbadging's limitations. "Crossbadging can at best be a temporary strategy to enhance product line-up and make dealerships profitable, but if used over a long period of time, it will lead to brand erosion," says Toshiyuki Shiga, COO, Nissan Motor Co.

Globally too, cross-badging, though long practised, has not always been a success. In recent times the only instance of cross badging working is that of the Subaru BRZ and the Toyota Scion FR-S, both launched in the US this year. But there were specific reasons for this. This sports car was developed jointly by Subaru and Toyota Motor Co, thereby producing, according to auto experts, a better vehicle than either could have done individually. Subaro took care of the engineering, chassis and power train while Toyota handled the design. It was not a case of taking an existing model and cross-badging it. In contrast, General Motors in the US has tried cross-badging all too frequently - and is paying for doing so. "Excessive cross-badging is one of the factors that contributed to General Motors' bankruptcy," says Kakade.