The company, started in 1958, gradually grew complacent and lost touch with its customers thanks to liberalisation and the entry of foreign players. Here's how the company reacted to the situation and fought its way back.

Customers check out Godrej appliances at a Delhi store
Executive Summary: Godrej Appliances, started in 1958, dominated the consumer durables market for decades, especially in refrigerators. But gradually it grew complacent and lost touch with its customers. Liberalisation and the entry of foreign players saw its market share in the segment drop by half. This case study describes how the company reacted to the situation, re-branded its products, and fought its way back.

The findings of a series of market surveys stunned the top management of Godrej Appliances, one of the leading companies of the Godrej group.

They said the company and its products were not connecting with young people. The average age of its customers was 35 to 45 years - a serious impediment in a country with 45 per cent of its population below 25. Worse, they claimed, it was not even perceived as a technology brand - the market did not think its products incorporated the latest advances in technology.

The year was 2005. The surveys had been commissioned to figure out why Godrej Appliances was losing market share. No doubt competition had stiffened following liberalisation and the entry of aggressive foreign players, especially Korean brands like LG and Samsung, and the Japanese like Akai and Aiwa. But Godrej executives had never imagined that such a yawning gap had grown between perception and reality.

"There was little or no difference in terms of technology between us and the foreign players," says Ramesh Chembath, Assistant Vice President, Marketing, Godrej Appliances. "Yet the youth considered us a momand-pop brand." 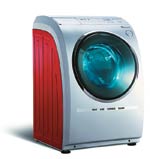 A front loading washing machine was launched in 2010 with an upward facing tilted drum so that the user does not have to sit while loading or unloading clothes
Founded in 1958, Godrej Appliances had been the largest and most popular consumer durables company in the country. For many years it sold only a range of refrigerators, but added washing machines to its product line in 1996. Though market share in refrigerators hovered around 27 per cent - there were rivals even then, indigenous ones like Kelvinator, Videocon, Whirlpool and Voltas - Godrej was always among the top three players.

"Demand used to outstrip supply by a large margin even though our Mumbai factory ran to full capacity," says Chembath. For many years, customers had to put up with a waiting period of 30 to 45 days.

The Eon brand has been very successful, contributing 30 per cent of the company's total revenues, even though it costs five to 30 per cent more than rival brands
While matching Godrej in the quality of their products, the new foreign players also employed advertising blitzkriegs, attractive packaging and aggressive pricing strategies to push sales.

"At one point, Godrej's products were priced 15 per cent higher than similar products offered by foreign players," says Chembath.

Slowly, Godrej's market share began to fall. The management remained complacent, calling it a temporary blip, unable to believe that customers would abandon a brand they had trusted for generations in favour of relatively new and unknown brands.

It also drew comfort from the fact that LG's first foray into India - in 1993, then sporting its original name, Lucky Goldstar - had been a failure. But LG's second coming, in 1997, proved to be completely different. By 2000, Godrej refrigerators' market share had fallen by half - to 13 per cent.

An alarmed Godrej management's first few attempts to turn the tide ended in failure. It introduced some innovative technologies like 'Penta Cool' in refrigerators - which provided cooling from five sides, unlike others those days whose cooling came only from the back of the refrigerator - but failed to arrest the decline.

To shore up its overall market share in consumer durables - and also address a long-standing complaint of dealers that Godrej Appliances' portfolio of just refrigerators and washing machines was too limited - the company began selling air conditioners from 2004 and microwave ovens from 2005.

"The idea was to muscle out the foreign brands in market share, deepen our engagement with customers and get an upper hand in trade negotiations with channel partners who wanted to sell a full bouquet of our products," says Chembath.

But neither of the two new products made any impact. Even at the height of the crisis, still, Godrej refrained from cutting prices to match those of its foreign competitors.

"Slashing prices was an option, but we realised it could not be a long-term solution," he adds.

So what did Godrej Appliances finally do?
It set about overcoming the two drawbacks the surveys had pinpointed: the misconception about its technology use and its lack of youth connect.

From 'Penta Cool' it moved on to introduce the 'cool shower technology' in its high-end refrigerators, that took into account the Indian habit of overstuffing them.

While most rivals provided five to 10 cooling vents, depending upon the refrigerator's size, Godrej added several more, providing extra cooling which prolonged the shelf life of perishable food items. In the past five years, Godrej Appliances has posted a compound annual growth rate of 35 per cent. It began selling microwave ovens in 2005, and now has a range of them
Similarly, in 2008, it launched washing machines with built-in intelligence which enabled them to temporarily stop working - going into 'sleep' mode - as soon as water or power supply was interrupted, only to resume functioning, from the point at which it had stopped, once the supply returned. For Indian consumers, plagued with taps suddenly running dry or power unexpectedly going off, this was a huge convenience.

In 2010, it came up with a fully automatic front-loading washing machine with an upward facing tilted drum so that the user does not have to sit down while loading or unloading the clothes being washed.

Again, in 2006, it was the first to introduce an air conditioner, or AC, with a compressor that ran at different speeds depending on room temperature, thereby reducing power consumption by about 30 per cent compared to other products, where compressors run at a single speed.

To woo the youth, Godrej turned to design specialists to suggest shapes and colours that would make their products look sleek and appealing. "We emphasised making our products look contemporary," says Kamal Nandi, Vice President, Marketing and Sales, Godrej Appliances. "We gave our brand a sheen of technology by telling consumers about the presence of other Godrej companies in hightech areas such as aerospace and industrial equipment manufacturing."

To address the market better, Godrej Appliances also began differentiating its product offering, providing different models for different socio economic groups. The high-end 'cool shower technology' refrigerators were given the label Eon. For the mid-market segment Godrej launched the brands Edge and Axis, while for the cost conscious mass market, it had Neo.

In the months that followed, it did the same with its ACs, washing machines and microwave ovens. "We identified a specific need for each category and products were developed around these needs," says George Menezes, Chief Operating Officer, Godrej Appliances.

Despite the crowded consumer durables field, the strategy is working. From the nadir of 13 per cent market share in refrigerators, Godrej has climbed to 17.2 per cent for the 12-month period ending September this year, despite the entry of three new multinational players - Sharp, Panasonic and Hitachi - in the last four years.

The Eon brand has been particularly successful, even though it costs five to 30 per cent more than similar products of rival brands, and contributes roughly 30 per cent of the company's total revenues. "That is why our media advertisements are focused only on the Eon brand," says Menezes. However, Godrej is still behind refrigerator market leader LG with 36.7 per cent share.

Overall, in the past five years, Godrej Appliances has posted a compound annual growth rate of 35 per cent, much higher than the 17 per cent growth rate of consumer durables industry. It hopes to close the current financial year with a market share of 6.9 per cent in the consumer durables category and revenues of Rs 2,400 crore - up from Rs 600 crore in 2006/07. This puts it in fifth position in the sector behind market leader LG, with 30 per cent share, followed by Samsung, Videocon and Whirlpool.

The pinnacle may still be some distance away, but the progress made is significant. Equally important, Godrej Appliances's average customer is now in the 25 to 35 age bracket. Within the company the emphasis is now on product expansion and innovation, with a 100-member multi-generation product planning team having been set up for this purpose.

"We are spending close to five per cent of our annual turnover on research and product development activities," says Nandi.

Godrej added around 100 new stock keeping units - or innovations under various categories - to its portfolio in 2010.