Samsung raises the bar with new range of smart TVs

For 2013, it has announced 20 new models across price ranges. G&G reviews the new 46" F7500 which comes in the Series 7 televisions from the Korean tech giant.

Samsung is really pushing the envelope in the television space. So for 2013 it has announced 20 new models across price ranges. We got our hands on the new 46" F7500 which comes in the Series 7, a rung below the top-end televisions from the Korean tech giant.

PICTURE & 3D
The picture quality is stunning, especially when you are playing FullHD content. The colours are vibrant and the blacks really stand out. Unlike last year, when we felt Samsung's 3D had to do some catching up with LG's, this year the 3D is as stunning as that from its Korean rival. In fact, a lot of the credit must go to the light-weight 3D active glasses that come with the set. As we played the IMAX Underwater World in 3D, the Moray Eels literally swam out of the screen. However, we did miss a 3D button on the remote. The audio quality is good enough for you to not need any external speakers. 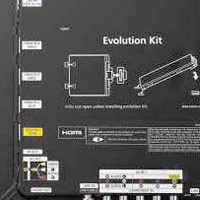 This is also where you will add the evolution kit in case you need a hardware upgrade later on.
The F7500 is a stunner, even before you switch it on. Once on, the initial set up as well as the tutorial is done in under 10 minutes. But we did stumble a bit with the Smart Touch Control remote, not because the device was flawed, but because we are used to working differently on a remote. This one comes with a touchpad that you use to navigate on-screen menus. It will take a couple of hours, but you will get used to it. Look behind the TV and you see why Samsung is ahead of the curve with its smart TVs. This is where you will see the quad-core processor that powers this TV.

CONTROLS
The F7500 too features Samsung's cutting edge motion and voice controls. But we still feel this technology needs to be perfected a bit more. We had an accuracy rating of around 70 per cent with the motion sensing but it sort of takes the 'lean back' out of TV viewing. The voice control - activated by pressing a button on the remote - is much easier to use, provided you have a polished accent. With our Indian accent, it has a 50-50 success rate. Just look at this as an add on, not the feature for which you are buying this shiny new TV.

SMARTHUB
You can add apps to the TV by clicking the Smarthub button on the remote. The TV, however, needs to be connected to a Wi-Fi network or LAN to start downloading stuff. There are many apps to choose from, but the best addon for this TV is Skype that uses the pop-up camera on top to its advantage. Plus, this is also full blown media player, which can even play Flac files. We also liked the fact that the TV shows a dialogue box as soon as you plug in a USB drive. You can use this TV to do almost everything you would with a tablet. Just look at this as a large, very large, tablet computer.

Why We Fell For It: Smart TV with Super 3D, plus it is not all that expensive now