Commodities with good global demand can give decent returns

Export pull can be a big plus for any asset. While it's a general rule that commodities with good export demand can deliver good returns to investors, it's not the only rule.

Money Today
Export pull can be a big plus for any asset. Take guar gum and guar seed. The two rose 176 per cent and 147 per cent, respectively, in the first nine months of 2011-12, and helped the country earn Rs 12,000 crore in foreign exchange as against Rs 2,811 crore in the same period last year.

"Exports pushed up guar gum and guar seed prices in both spot and futures markets," says Dharmesh Bhatia, associate vice president, research, Kotak Commodities Services. India accounts for 1.4 per cent global export of farm commodities. The figure for imports is 1.2 per cent. According to the Agriculture and Processed Food Products Export Development Authority, India exported farm products worth Rs 43,626 crore in 2010-11. In 2011-12, the figure was Rs 82,000 crore, backed by global demand for processed foods, rice, sugar, buffalo meat and groundnut.

While it's a general rule that commodities with good export demand can deliver good returns to investors, it's not the only rule. Subhranil Dey, research analyst (commoditiesfundamental), SMC Global Securities, says there is no direct link between exports and domestic prices as a country usually sells only those commodities which it has in excess.

Sudip Bandyopadhyay, managing director and chief executive officer, Destimoney Securities, says, "Exports adds volatility and uncertainty to prices. Most commodities, whether for export or not, have by and large the same dynamics. However, in case of commodities that are mainly exported, the demand comes from different countries and so is to an extent beyond domestic factors."

Some commodities which clock decent export numbers and are available for trading on the National Commodities and Derivatives Exchange (NCDEX) and the Multi Commodity Exchange (MCX) are soyabean, turmeric, cotton, chilli and sugar.

SOYABEAN:
Soyameal, produced from soyabean, is exported in huge quantities.

The soyaoil and soyameal ratio is 18:82, which means crushing of 100kg soyabean gives 18kg soybean oil and 82kg soybean meal. Soyameal, the main finished product that is used as animal feed, is the key determinant of soyabean prices.

India produces nearly 83 lakh tonnes soyameal a year out of which it exports around 38 lakh tonnes or 45 per cent.

India needs three lakh tonnes soyameal for animal feed. Between April and May this year, it exported around 4.5 lakh tonnes. The export price rose 16 per cent from $470 per tonne in April to $545 per tonne in mid-June.

Domestic soyameal prices, which were Rs 23,500 per tonne in April, touched Rs 30,000 per tonne in June, a rise of 24-26 per cent, at major trading centres such as Indore, Mumbai and Kandla. Global prices rose 11 per cent during the period. Experts are positive on soyabean as the India Metereological Department has declared that the country will get 15 per cent less rain than normal between June and September, the sowing season for most crops. Dry weather in soyabean-growing areas in the US also affects the yield.

In the light of low carryover stocks, both domestically and globally, Mathur says, "Expectation of a slight increase in world soyabean production this year and higher demand will keep bulls in high spirit. However, prices may start falling after the new crop arrives in October."

"This year soyabean prices will remain in the range of Rs 3,800-4,700 per quintal," says Gnanasekar Thiagarajan, director, Commtrendz Research.

TURMERIC:
India is the largest exporter, producer and consumer of turmeric in the world. According to data from the Spice Board of India, every year, India exports 50,000 tonnes turmeric, just 10 per cent of its production. This means exports should not have much impact on prices.

As India is both the largest producer and consumer, local demand impacts prices more than anything else. For instance, between April 2011 and January 2012, exports touched an all-time high of 67,000 tonnes, with little impact on prices. Instead, prices fell over 50 per cent to Rs 4,707 per quintal during the period.

The price fall is 7 per cent during the first quarter of the financial year and 30 per cent between January and June. However, in July, there was a sharp jump of 42 per cent to Rs 5,263 per quintal.

Click here to Enlarge
"The reason was emergence of buying at low levels. The price is likely to be range-bound at Rs 5,500-6,500 per quintal in the festive season," says Subhranil Dey, research analyst (commodities-fundamental), SMC Global Securities.

A big reason for the fall in prices in January-June 2012 was record production. In November 2010, prices touched an all-time high of Rs 16,350 per quintal on the futures platform and Rs 17,000 per quintal in the spot market. "High returns encouraged farmers to produce more in the next season," says Shikha Mittal, research analyst, Karvy Comtrade.

The rise in area resulted in production of more than 80 lakh bags (5.74 lakh tonnes). The supply hit the market at the start of the arrival season in March-April 2012. Hence, prices declined on both futures and spot platforms.

India's sugar industry is tightly regulated, production follows a cyclical pattern and thus the status of India as a net importer or exporter depends on supply and government policies. India usually exports 10-11 per cent production. 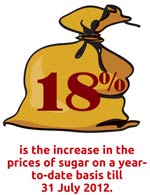 The Directorate General of Foreign Trade has registered export of 1.2 million tonnes sugar since overseas sales were freed on May 14. Out of the registered quantity, 75,0000 tonnes has already been shipped out.

However, there may be a change in script. Less rain may impact on production in the new season starting October. Since the start of the financial year, sugar has risen over 22 per cent on the MCX. It was at Rs 3,394 per quintal on 30 July.

Some experts say the demand was firm after the government scrapped the quota system in May and freed exports. Unfavourable weather in major producing countries and falling rupee, and domestic demand ahead of the festive season, perked up prices.

Siddharth Shankar, director, Kassa Group, says, "Poor rainfall in sugarcane-producing states is one of the biggest reasons for the rise in prices."

However, due to restrictions on sugar trade, experts are not upbeat on prices. "Due to government controls, we do not expect a major rally or fall in prices. Meanwhile, with production forecast to fall, a somewhat higher price is possible," says Krishnan. On 31 July 2012, it was trading at Rs 4,467 per quintal.

COTTON:
India is the second-largest exporter of cotton after the US. However, exports depend not only on production but also on government policies. During years of deficit, the government protects domestic consumers and restricts exports.

For the next two quarters, the price of cotton on the Multi Commodity Exchange is likely to stay in the range of Rs 16,700-18,500 a bale.

Market experts say prices may rise further if this year's crop fails. In the current season, with record high exports, the stocks may decline much below the industry norm of 25 lakh bales. "However, if the government restricts exports, the upside may be capped," he says.

"For the next two quarters, the price on the MCX is likely to stay in the range of Rs 16,700-18,500 a bale," says Thiagarajan of Commtrendz Research. Chilli is grown in almost all the states. Andhra Pradesh, the largest producer, accounts for 30 per cent to the total area under chilli, followed by Karnataka (20 per cent), Maharashtra (1 per cent), Orissa (9 per cent) and Tamil Nadu (8 per cent). Andhra accounts for 51 per cent production.

According to experts, the outlook is bright for the next few quarters. "We see prices at Rs 5,500-6,000 per quintal, as demand is expected to pick up after monsoon. Pakistan is having a bad year due to which demand may shift to India," says Faiyaz Hudani, senior research analyst, Kotak Commodities.