Spices give good returns for your investment portfolio

You can add some spices in your investment portfolio since they are likely to give good returns during the coming months due to supply constraints.

Is your investment portfolio looking a bit bland, not giving good returns and not looking exciting enough? You can think of adding zing by sprinkling a bit of spices in it.

A combination of spices, such as pepper, turmeric, chilli, coriander, cardamom and jeera, that are currently traded on the commodities exchanges, can not only help you to diversify your portfolio, but could also give good returns since their prospects appear to be bright, at least in 2011-12.

If you had invested in these spices during 2010-11 in equal proportions, you could have made good returns as well. The pack of six spices outpaced the stock market and gave an average return of around 32%. Among them, chilli gave a maximum return of 63.57%, while cardamom ended as the laggard with a return of -14.10%. In comparison, the benchmark indices S&P CNX Nifty and the BSE Sensex gained around 11% each to 5,833 and 19,445, respectively, during the previous financial year 2010-11.

Ajitesh Mullick, assistant vice president for agri-research, Religare Commodities says, "Exporters and stockists are waiting for the prices to moderate some more before initiating demand at lower levels. Therefore, the shortterm trend is expected to show some corrections but in the long term , one can witness the rates for spices to start firming up again due to increase in overseas demand."

WHY INVEST IN SPICES?

Spices are primarily used as flavouring agent in food or as medicine. Looking into the domestic front, India is among the major producer and exporter of all these spices. The demand for domestic spices is high - not only in India but also in countries such as the United States, European Union, Arab countries and South Asian countries.

According to market experts, India is an important centre for spices producing more than 2.7 million tonnes of spices out of which it exports about 8-10%.

India's share in world trade of spices is about 40-50% in volume terms and 25% in value terms. Thus, India's demand and supply play an important role in the world market.

Demand for Indian spices is high because they are clean and hygienic as compared to that of other countries. Tanushree Majumdar, senior economist, National Commodities and Derivatives Exchange (NCDEX) explains, "Indian spices have much lesser pesticide content than those grown elsewhere and this would continue to evoke international demand in Indian spices. And organically cultic vated spices are being encouraged by the government and the spices board. This should bode well for India in the international trade arena."

Investor must know the cropping season of the spice, for the simple reason that the cropping pattern (and the subsequent arrivals in the market) have a big role to play in deciding the movement of the prices and more importantly their volatility. Also as a commodity investor you must also keep in mind the international cropping pattern for some spices which are traded globally.

For instance, the sowing season for pepper is May-June and harvesting time is November to January. Market experts believe that the price of pepper remains volatile during March-October.

In addition to the knowledge about production, export and import estimates is also important. Depending on the price view you should be able to time your entry and exit in the market. 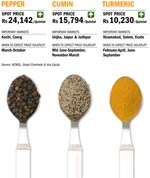 Click here to Enlarge
Tanushree Majumdar of NCDEX says, "Any investor in commodity derivatives must spend at least six months to a year just studying about the commodity and tracking the price movements."

At present, pepper, turmeric, jeera, coriander, cardamom and chilli are all available for trading on various commodity exchanges such as NCDEX, Multi Commodity Exchange (MCX) and Indian Commodity Exchange (ICEX). Let us take these commodities one-by-one and try to understand the investment opportunities available in the spices pack.

"Lower stock levels were reported in the major growing countries of Vietnam, Indonesia and Brazil. With a fall in production in these countries, the demand shifted to India and firm international rates also had a bullish impact on the Indian markets," says Ajitesh Mullick of Religare Commodities.

According to trade sources, production in 2011 is estimated at 21 lakh bags (1 bag = 60 kg) compared with 29 lakh bags in 2010. The out put in 2008 and 2009 was 44 lakh bags and 47 lakh bags respectively. Latest updates show that there has been a marginal increase in area under cultivation in Gujarat.

"The acreage under jeera in the state stood at 2,44,600 hectares, marginally higher than 2,42,700 hectares a year ago," says, Anand James, chief analyst, Geojit Comtrade.

According to market experts, broad bullish trend continuing from 2005 onwards is likely to carry on; even though arrival sentiments can support corrective moves in short-term. "Jeera can touch Rs 20,600 per quintal by the end of the ongoing financial year," James added.

Chilli: Red Chilli prices gained significantly during the previous financial year due to robust exports and adverse weather conditions in growing regions. Crop failure in Pakistan and China due to bad weather conditions led buyers to shift to India, thereby, helping prices to gain in the domestic markets in the second half of 2010.

According to the Spices Board of India, exports of chilli during September to December 2010 surged by 3.47% to 1,20,750 tonnes compared with 1,16,700 tonnes in the same period in the previous year. The extended rainfall in the month of October and November in major chilli growing regions further supported the northward movement of prices.

"In the medium to long-term (June onwards) prices will depend on the quality of chilli with the stockists and the monsoons in the main chilli growing area such as Guntur. Stocks of chilli in Andhra Pradesh cold storage are around 60 lakh bags, 25% lower than that in the previous year. Technically, chilli can find strong resistance at Rs 11,500 per quintal and thereafter at Rs 11,740 per quintal," Rao added.

Turmeric: Although turmeric traded at high levels for most of 2010, during the previous financial year the spice touched Rs 17,025 per quintal on November 30. Thereafter, due to improved production estimates for the crop in the current season the spice witnessed a steady decline in prices, falling by nearly 40% to Rs 10,225 per quintal during December 2010-March 2011. After a two year lull in production, the spice witnessed a significant rise in output in 2010-11.

"Low output in the two years and the resultant negligible carryover stocks caused prices to surge till the third quarter of 2010," says Nalini Rao of Angel Broking.

"We can see improved export and strong demand for turmeric in the coming weeks. A price range of Rs 14,500 per quintal to Rs 19,000 per quintal should be an ideal trading range for the financial year 2011-12," Sinha of NCMSL added.

Cardamom: During the financial year 2010-11, cardamom prices witnessed a decline of around 14.10% to Rs 1,020 on March 31, 2011. Subhranil Dey, research analyst, commodity, SMC Global Securities explains, "The major reason for this fall was the acute shortage of labour supply. This had lead to deployment of unskilled workers for picking. These labours had harvested immature capsules, reducing the quality of the arrivals.

Secondly, improved irrigation facilities coupled with the timely summer rains created an impression among the market participants that these showers would make plants more healthy and high yielding."

Hence, the sentiment prevailing in the market was that the crop would be available throughout the year without any break between the current and next season. India has always been facing stiff competition from Guatemala. India was selling at $30 a kg while Guatemala cardamom went at $25 to $27 per kg in the international market. The geo-political tensions built up in the Middle-East had dampened the demand.

The current scenario depicts that cardamom futures may continue to remain in bear territory. "In the near future the spice can fall to Rs 800-750 per kg. However, in the long-term, analysing the seasonality of cardamom futures has always given an opportunity to the bulls during May-September. Taking this opportunity of buying these at low levels, one can expect the prices to touch Rs 1,400-1,600 per kg till the festival season sets and make a neat killing," Dey added.

Coriander: The commodity generally known as "Dhania", is cultivated in Rajasthan, Gujarat, Madhya Pradesh, Tamil Nadu and Uttar Pradesh. Coriander is a rabi crop, the sowing starts in October. Arrivals begin in February and peaks from March to May. At the price front, coriander price on the NCDEX surged around 54% to Rs 4,854 per quintal during the previous financial year ended.

Prices of the commodity traded in a narrow range of Rs 2,500- 3,000 per quintal throughout the major part of financial year 2010-11. Nalini Rao of Angel Broking says, "Prices, however, gained momentum since December 2010 on expectation that the crop would likely be lower than previous year due to untimely rainfall in December 2010 and dew frost in the month of January 2011."

"Technically, coriander can find immediate support at Rs 3,810 per quintal and immediate resistance at Rs 7,000 per quintal," Nailini Rao of Angel Broking added. The prospects of spices are looking bright. So, by having a direct stake in commodities one can protect oneself from soaring inflation.
Published on: Jul 06, 2011, 12:00 AM IST
Posted by: Gaytri Madhura, Jul 06, 2011, 12:00 AM IST