News
Magazine
Markets
Company Stock
Can the LIC Stock Bounce Back? What Should Investors Do?

Can the LIC Stock Bounce Back? What Should Investors Do?

The LIC stock is bleeding -- it is down nearly 30 per cent from its issue price, even as other life insurers surge. Can it bounce back?

The listing of Life Insurance Corporation of India, or LIC, on May 17 was a momentous occasion for the Indian stock markets. Since then, the benchmark S&P BSE Sensex has lost a little over 5 per cent, while the LIC stock is down nearly 30 per cent from its issue price of Rs 949.

Policyholders and employees of the insurance major, in which the government still owns 96.5 per cent, can take solace in the fact that they were allotted shares at a discount of Rs 60 from the issue price. But, if they still hold those shares, then nearly one-fourth of their wealth has already been wiped off.

Even if the government and LIC have said that “there is value in the company” and “LIC is a long-term bet,” stock markets can be tricky at times—not only for the investors but also for the companies.

One may argue that the market sentiment is weak. But, the other listed life insurers—HDFC Life Insurance, SBI Life Insurance and ICICI Prudential Life Insurance—are up 3-5 per cent since LIC listed.

So, what is ailing LIC? Did it get the math wrong while computing its valuation and issue price? Or is the market punishing it for its apparent lack of transparency? 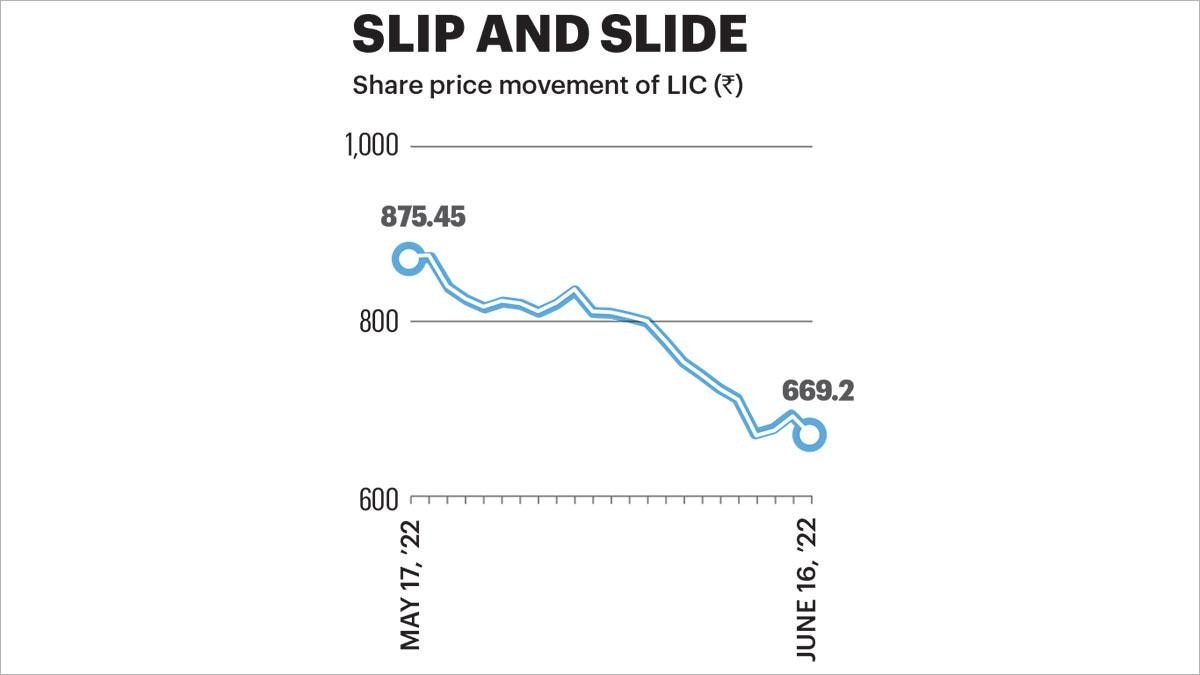 “The ability to sell high-margin non-par products—as opposed to par products that provide policyholders a significant share of policyholder’s surplus—will require a change in the mindset of the organisation and its agency force, which could be LIC’s biggest challenge,” said Macquarie Research in its first report on LIC.

It highlighted the fact that the embedded value—a key metric for an insurance company—of LIC has “inherent volatility,” since a substantial part comes from “marked-to-market unrealised equity gains”.

Nikhil Kamath, Co-founder of Zerodha, believes there is nothing wrong with LIC, but the valuation is not cheap, and that is a challenge. “For a company which, maybe, does a PAT of Rs 10,000 crore on an average, its market cap is about Rs 4.5 lakh crore. If we are talking about forward earnings of Rs 900 in FY24 and the Nifty will be at a 17x or 18x forward PE, there is no reason why LIC should have a forward multiple of around 40,” he says, adding that there is room for further correction.

That does not bode well for investors who bought shares in the IPO. LIC policies are safe, backed by a sovereign guarantee, but the stock returns are certainly not insured.