wakefit innovations sells its mattresses only online and directly to customers. This allows it to control costs. At one corner of the busy factory, near Bangalore, is the tailoring department of Wakefit Innovations, a 'sleep company'. A bit ahead is a stack of tins with raw material. About 10 chemicals, mixed with colour and water, go into a batch foaming machine - a queen-size die that resembles an extra large baking tin. Indeed, the chemicals poured in rise like a cake up to 40 inches as the temperature in the machine touches 110 degrees centigrade. Blue, pink, and white foam formed then takes about 48-72 hours to dry, before it is cut into a more manageable shape. The foams are then assembled into a mattress. Wakefit also makes foam pillows and mattress protectors but the mattress is their primary product.

Behind the promise of pain-free sleep is science, and also their differentiation. The top layer is a proprietary foam the start-up developed; it has large cells for better ventilation. The middle layer has the softer memory foam (takes the body's shape). The last layer is of hard foam, which supports the memory layer. All the three foams are finally glued to make the 'orthopaedic' mattress or one that supports the spine better.

The founders of Wakefit, Ankit Garg and Chaitanya Ramalingegowda, are both failed entrepreneurs in their previous avatars. Garg, in fact, sold pasta on a bike in Mumbai after losing his shirt in a venture before. He is a chemical engineer and foams always interested him; his folks ran a testing facility in Noida for foams and textiles, where he saw poor quality foams come in. "In a shop, there are hundreds of mattresses, from coir to spring-plus-foam to foam-plus-foam. It confuses customers," Garg says. "The salesman has zero interest in what is inside the mattress. Finally, a Rs 4,000-product can be sold at Rs 10,000. Prices are too high and the quality is definitely not good. I realised a disruption was possible."

Garg met Ramalingegowda when they both joined Akosha, a consumer complaints company in Delhi. The two bootstrapped the company and haven't raised any funding till date. When they started in 2016, they pulled in just enough resources to start an in-house manufacturing facility. This proved crucial. It helped the company control the quality of foam making (probably the only mattress company to promise a warranty of 20 years). There are standard sizes but customisation is possible - in Mumbai, for instance, mattresses can be tailored according to smaller rooms. 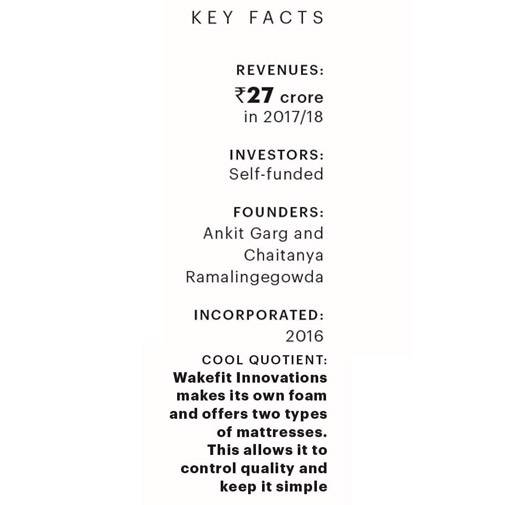 The products are shipped directly from the factory to the consumer's house. Following such a model has huge price implications. At present, Wakefit sells only online - through its own website, Amazon, Flipkart, and Pepperfry. The mattresses cost Rs 5,000-25,000, depending on the thickness. "We are 45 per cent cheaper than the big brands - there are no middlemen. The big brands have two-three levels of middlemen," says Ramalingegowda. Wakefit's competition includes brands such as Sleepwell, Kurlon, and Duroflex.

Many customers, and the founders, say the mattresses are value for money, but the real reason behind Wakefit's success may be simplicity. There are just two variations of the mattress, the orthopedic and a more conventional one. The philosophy is: do it less, but do it well.