Direct sale of farm produce, pricing freedom, digitisation and traceability in poultry, livestock and fisheries segments will go a long way in accelerating the farm economy 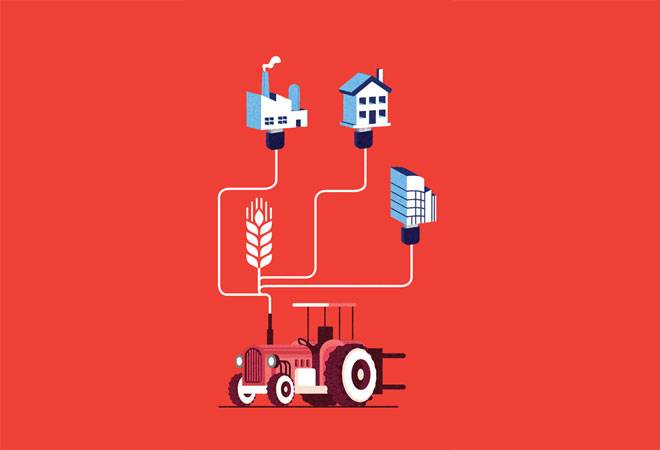 One of the problems that agri-business major ITC faced during the initial weeks of the Covid lockdown was labour shortage and limited availability of trucks. Instead of waiting for the situation to improve, the company carried out new supply chain interventions such as multi-point rake movements, loading containers directly from villages and mandis and coastal container movement. Even bag-less supply chain (loose grains) was tried out, says S. Sivakumar, Group Head, Agri and IT Businesses, ITC.

For the company, such a crisis might have been temporary, but for Indian agriculture, it remains one of the biggest perennial problems. The ability to ensure remunerative prices to farmers, handling of post-harvest produce with minimum losses, maximising value addition and transporting fresh produce and processed food seamlessly within the country and abroad have been the holy grails of India's agricultural sector reforms. The Covid stimulus announced by Finance Minister Nirmala Sitharaman some days ago recognised most of these concerns. Most of the ideas are not new. Implementation has been the main hurdle throughout.

The need for the changes is critical now. According to the 3rd advance production estimates of major crops for FY20, released by the agriculture ministry on May 15 - the day agriculture stimulus measures were announced - the country saw a record production of foodgrains (295.67 million tonnes) like rice, wheat, coarse cereals and maize. Oilseed and cotton production are also setting new records. It is time to manage the produce efficiently. Individual companies can do their bit, but the country cannot move ahead without a national framework. "Scientific agriculture practices, innovation in organised credit, better post-harvest management, extending shelf life of produce, efficient storage, smart logistics and a plethora of other options are available from smart entrepreneurs. This is the right time to bring that bouquet to farmers," says Palat Vijayaraghavan, Founder & CEO, Lawrencedale Agro Processing India (LEAF), an Ooty-based agriculture value chain firm.

The government was aware of these requirements much before the Covid-19 stimulus. One of the key recommendations of the Doubling of Farmers Income (DFI) Committee in 2018 was to adopt various structural reforms and a governance framework to solve these issues. "Several of the committee's suggestions are already being implemented. The government is working on institutional mechanisms for effective coordination and convergence of manpower, material, money, time," says Ashok Dalwai, Chairman of the DFI committee. The Covid-19 stimulus measures for agriculture include a financing facility of Rs 1 lakh crore for funding agriculture infrastructure projects at farm-gate and aggregation points (Primary Agricultural Cooperative Societies, Farmers Producer Organisations, agriculture entrepreneurs, start-ups, etc). The fund will be created immediately, Sitharaman said.

Equally important is the freedom to sell. "Allow farmers and wholesale dealers, businessmen, etc., to buy and sell products wherever they wish without the restrictions of the APMC Act," says farmer leader Pushpendra Singh, President, Kisan Shakti Sangh.

Agriculture economist Ashok Gulati wants the APMC Act, which limits farmers' ability to sell in local markets or mandis, to be suspended for at least two years. "APMCs have become a source of rent seeking for arthtias (middle men). They exploit farmers and buyers. Most of these market committee members are from the political class. The government should break this chain," he says. According to him, mandi cess, commission and charges used to add up to 14.5 per cent in Punjab. After GST, it is 8.5 per cent, which is still high. "What happens then? The roller flour mill in Punjab will not buy from Punjab. Instead, it will source from UP, as it does not have to pay taxes there. This means prices become non-compatible as you have added 8-10 per cent taxation." The system should be abolished. "This APMC system, if you can't suspend or abolish it, allow anybody to buy directly from the farmer without paying any commission, market fee or cess," says Gulati.

Sitharaman's stimulus package tries to address this by proposing a Central law to bypass the APMC Act and allowing farmers to sell anywhere. The problem is that a Bill can take a long time to become a law that is implemented in letter and spirit, especially if it is about agriculture, which is predominantly a state subject.

The government has said that it will amend the Essential Commodities Act that empowers administrations to fix stock and price limits for all essential items. The issue is not the existence of the Act but the practice of invoking it whenever there is a surge in prices of commodities.

Abhijit Sen, former member of the Planning Commission and a professor at the Jawaharlal Nehru University, says the best thing the Central government can do is to leave agriculture, especially marketing and logistics reforms, to states. Citing the example of the Central government's Covid response, Sen says the Central government is coming out with statements to promote agricultural activity but not any coherent policy. "You have to leave it to state governments to do it," he says. "There is a decline in demand for fresh produce as hospitality industry is closed. You cannot pretend that the problem doesn't exist. Let state governments try within the broad set of constraints. Don't send Central teams all over the place," he says.

A massive cooperative movement among farmers is another reform that will bring scale to farm or village level procurement operations. In February this year, Prime Minister Narendra Modi announced the nationwide launch of 10,000 farmer producer organisations (FPOs). The Budget allocated Rs 6,865 crore for providing Rs 15 lakh to each FPO. If well organised, FPOs can ensure better access to technology, inputs, finance and market for member farmers.

The biggest reform, in the context of increasing cases of zoonotic diseases caused by mutant viruses in animals, as is suspected in Covid-19, is a national policy to bring in stringent health and safety measures, including traceability, in cattle, poultry, fisheries, etc. T. Nanda Kumar, former Chairman, National Dairy Development Board, says post-Covid, the animal husbandry sector will need to go through a transformation. "It will have to become more organised, hygienic. Even live birds may give way to frozen stuff," he says.

Finding ways to help farmers make extra money has always been on cards, but there is a Rs 20,000-30,000 crore opportunity that is awaiting government push, says Fauzan Alavi, Director of Allanasons, India's largest buffalo meat exporter. Alavi is talking about the policy for salvaging the male calf. "There are about 10 million male buffalo calves in the system. Earlier, farmers used them for farming or transport. The male buffalo has little utility for the farmer today. The scheme to incentivise farmers to tend male buffalo calves can give them an assured guarantee as buffalo meat export units will give 100 per cent buyback guarantee for the animal," he says. He says bovine meat has the highest potential in agri exports. Incidentally, the government has already announced a programme for eradication of the foot and mouth disease. Encouragement to scientific way of managing livestock, while taking care of health and traceability, can change the fortunes of the Indian farmer.

The use of digital technology in farming and storage also needs to be encouraged. "Setting up scientific warehousing management companies, encouraging newer technologies to manage existing infrastructure can address the majority of the issues (in the agriculture produce storage system)," says Sandeep Sabharwal, CEO of agri-logistics firm Sohan Lal Commodity Management.

The government has one advantage. It does not have to search for the path to enhance agriculture incomes. There is no area of agriculture that the 14 volume report of the DFI Committee has not covered. The final recommendation of the DFI deserves particular mention: Speedy and quality implementation of government policies.