Will health hobble the economy? K Srinath Reddy
ABOUT: As a health policy wonk, Dr K. Srinath Reddy keeps a hawk's eye on all matters of public policy in India. Given the country's poor health coverage and high incidence of disease, Reddy, former head of the cardiology department of the All India Institute of Medical Sciences, passionately advocates cardiovascular health, tobacco control, chronic disease prevention, and healthy living.

An increase in life expectancy will add to the numbers of elderly persons, but the population will retain the present profile of young and middle-aged persons for the next two decades. This demographic profile can boost productivity and spur economic growth in the coming years. However, this assumption is based on the premise that the young will grow healthy, gain education and gather skills, and their middle-age years will remain a period of good health and high productivity. But it may be belied by health threats that can drain the demographic dividend.

We still have an Infant Mortality Rate of 40, which is nearly four times higher than in Sri Lanka and compares poorly with Bangladesh and Nepal.

Many of the surviving babies grow in an appalling state of malnutrition, with over 40 per cent of the children under three years being underweight and eight out of 10 being anaemic. This makes them prone to severe infections in childhood. They are more likely to develop diabetes and heart disease in early adulthood. The huge loss of potentially productive brain power, due to compromised learning ability and unrealised intellectual potential, is a major economic threat arising from childhood malnutrition.

Only 64 per cent of our children are fully immunised, compared to over 95 per cent in most of the developing countries. Many under five years of age still die from diarrhoea and pneumonia. As girls reach adolescence and womanhood, they face the adversities of under-nutrition (33 per cent), anaemia (57 per cent), early marriage and ill-prepared pregnancy - all of which contribute to the inter-generational perpetuation of poor health and nutrition.

Maternal mortality is also high, at 178 per 100,000 live births, and is six times that in Sri Lanka and four times that in China. While incentives offered under the National Rural Health Mission have increased the number of institutional deliveries, there are still deficiencies in the quality of services in many health facilities they go to.

Other threats loom large in adulthood. A horde of non-communicable diseases is inflicting damage to health and economy, if allowed to advance unchecked. Currently, cardiovascular diseases, diabetes, cancers, chronic respiratory disorders and mental illness collectively contribute to 60 per cent of deaths and are projected to rise sharply by 2030. According to the World Economic Forum, India stands to lose $4.58 trillion between 2012 and 2030 due to these non-communicable diseases.

India has a major cause for concern because nearly half of the deaths and disability related to them occur before the age of 65. Heart attacks strike early, a decade before the average first heart attack in the West. It has been estimated that India lost 9.2 million potentially productive years of life due to untimely cardiovascular deaths in the age-group of 35-64 years in 2000 (570 per cent more than the US) and is projected to lose 18 million years in 2030 (900 per cent more than the US). The numbers with diabetes are mounting. Tobacco kills over a million each year and mental illness brings misery to millions.

Air pollution is damaging the health in cities and rural areas. Road traffic accidents and other injuries have taken the lives of 1.1 million in 2010, a rise of 57 per cent from 1990. Of this, 68 per cent of the deaths happened to people below 49 years of age. Deficient primary health services result in easily treatable conditions advancing to complications that demand expensive care.

Public financing on health
Low levels of public financing for health leads to high levels of out-of-pocket spending; at 70 per cent it is among the highest in the world. This leads to denial of care or impoverishment. About 60 million Indians are pushed to poverty each year by health care expenditure.

All of these trends portend poorly for the young as they grow amidst India's multiple health challenges. However, the future need not be bleak. Political will and professional skill can combine to create a more robust health system with focus on primary health services. Actions in other sectors can be aligned to public health objectives. People can be empowered with information and enabled by technologies to protect, preserve and promote their health.

Even crises can be turned into opportunities. While our health workforce is short of doctors, nurses and allied health professionals, there is a demand for more of them in the health systems. Investing in large-scale skilled health workforce development can provide millions of jobs to young people. By using its strengths in the information technology sector, India can become an innovation crucible for developing low-cost, high-yield models of health care delivery. The growth of the Indian pharmaceutical sector, in response to the rising global demand for generics, can also increase employment opportunities.

Transformational changes will require health system re-design and resource allocation at a higher level. Public financing of health must go up from one per cent of GDP (which places India in the bottom 10 of all countries) to at least two per cent by 2017 and at least three per cent by 2022. This will help reduce out-of-pocket expenditure to less than 50 per cent, even as the Universal Health Coverage (UHC) programme is implemented. 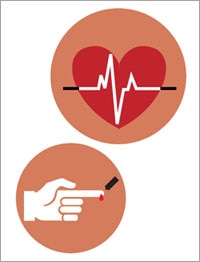 Healthcare
If all the states have favourable social determinants of health like Kerala and a well-functioning public health system like Tamil Nadu, the health indicators of the country will improve remarkably. Implementation of a well-designed UHC programme will advance health even in those two states. Scaling up the use of emerging technologies like the Swasthya Slate, which was recently listed by the Wall Street Journal among the six health care technologies with the highest potential for mass impact and is now being used by frontline health workers in Jammu and Kashmir, can quickly improve the outreach and effectiveness of our primary health services.

India's demographic dividend can be realised only if our human resources are nurtured well. Increased investment in health will bring huge returns in terms of economic gain. That was the conclusion of the Commission on Macroeconomics on Health (2001) headed by Jeffrey Sachs and the Commission on Investing in Health (2013) headed by Lawrence Summers. This is also the message that comes strongly from the World Health Organisation as well as the World Bank. Indian economists and business leaders would do well to pay heed, as would India's political leaders who wish to propel the country on a path of accelerated development by harnessing our youth power.