With a Common Admission Test, or CAT, score of 99.96 per cent, Vishnu Mohan, an IIT Madras graduate, got admission into two IIMs. But the institute he finally chose was the Amrita School of Business, or ASB, in Coimbatore, nestled amid the scenic Western Ghats.

What drew him to ASB? "I chose this school because spirituality and ethics are an important part of the learning here," he says. Started in 1996, ASB is part of the Amrita Vishwa Vidyapeetham, a deemed university run by the Mata Amritanandamayi Trust - founded under the educational initiatives of spiritual leader Mata Amritanandamayi Devi, or Amma - comprising five campuses with16,000 students. ASB itself has four campuses - at Kollam, Kochi, Coimbatore and Bangalore.

Associate Professor C.S. Udhayakumar (centre) at a yoga session with students
At ASB, students are taught to blend life with peace. They study a compulsory subject called Self Awa r e n e s s a n d Personal Growth, or SAPG, for the first 18 months of the two-year course. "It is an extension of Amma's philosophy, which aims at enabling students to achieve a sense of balance in life," says Abhayamrita Chaithanya, the Vidyapeetham's Pro-Chancellor.

The swami, who built the university from scratch, leads a spartan life in a tiny hut on the Coimbatore campus, which started in 1996. The institute assigns the subject such high scores that students can ill-afford to ignore it. "It is not just part of our curriculum. It is at the core of our curriculum,'' says Dean Gurumurthy Kalyanaram.

Students chilling out in their hostel after a hard day
The school asserts that the spirituality blended in pedagogy has nothing to do with any particular religion. "We don't touch religion at all," says C.S. Udhayakumar, Associate Professor at ASB, who designed the course. "It is based on spirituality in a broad sense. It draws study material from the teachings of 'awakened beings' of all religions.'' Adds Kalyanaram: "There are Christians and Muslims on the campus.

In fact, a father asked if we would allow his son to go out to offer his prayers. We said we would be delighted to do that." The students also have a compulsory one-hour yoga session every weekday. Another vital part of ASB's MBA programme is the community outreach.

Associate Professor Shobhana Madhavan, an IIM-A alumnus, who steers it, says it is intended to show the students, most of whom hail from well-do-do families, how the deprived sections live, and how they can help these sections in their own small way. All students, for instance, spend a few hours on weekends at the Ambedkar Colony on the outskirts of the campus, where mostly poor Dalits live - teaching the children there and spending time with them. "It is sheer fun," says Roshni Jayaraj, an MBA student. "I had never done anything like this before." The interaction has helped many of the colony's children do better at school, while a good number - despite studying in Tamil medium - have picked up English. "The (ASB) students have been coming here for the past seven years. That was very helpful for me," says K. Kaviyarasi, who scored 435 out of 500 in Class X Board exams this year.

The outreach programme also involves working with NGOs, including one that shelters HIV positive kids, and interviewing impoverished people such as migrant labourers and beggars. "Most students have never met a person infected with HIV," says Madhavan. "Interacting with such children builds awareness and removes prejudices."

Dean Gurumurthy Kalyanaram (in suit) with students. The hills of the Western Ghats form the backdrop.
Amma, who has a following of millions, is clear about her purpose in setting up the deemed university. "It aims to create an atmosphere to help students understand that serving society with a selfless attitude is also of prime importance," she says on email. 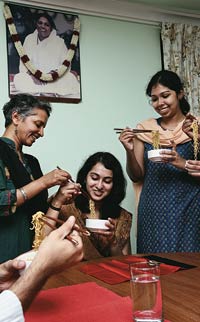 Associate Professor Shobhana Madhavan (left) shows students how to use chopsticks
The total fee for the two-year course varies between Rs 7 and Rs 10 lakh depending on which campus a student opts for. The four campuses together admit 300 students every year. Recruiters visiting ASB campuses include Future Group, Thomas Cook, ICICI Bank, IDBI Bank, among others.

There are plans to set up campuses in Delhi, Ahmedabad, Hyderabad and Bhubaneshwar in the next four years, the funding for which will come entirely from the trust. "The trust has so far invested about Rs 1,100 crore on developing the existing campuses," says Chaithanya.

The game changers: And, Finally...