In a weakening economy, rising indebtedness could cause problems The global financial meltdown of 2008 was brought on by a choppy U.S. mortgage market. Part of the crisis was triggered by high household debt besides lending to borrowers with not-so-good credit history. The world's largest economy saw its household debt steadily rise to nearly 100 per cent of GDP at the time of the crisis from 65 per cent a decade ago. That was a massive jump in a matter of 10 years as the money had rolled into mortgages, car loans, credit cards, personal loans and more. Eventually, the easy money induced the crisis and other markets suffered as well. India's household debt to GDP currently stands at 11.67 per cent, which is quite low compared to developed countries like the US. But debt levels are also rising here - household debt was in the range of 8-9 per cent of the GDP six years ago (see graphic Ballooning Danger).

Shanti Ekambaram, President, Consumer Banking, at Kotak Mahindra Bank, has a point to make. As India is a low per-capita-income country compared to developed nations, Indian households are more prone to shock due to lower income levels. As per the data available, annual per-capita income stands at Rs 1.42 lakh against the debt of Rs 16,945 per person. "The debt levels are not alarming, but you have to analyse the loan segments. It could be alarming at lower-income segments but not necessarily at per-capita income levels," she says.

Already there is a new institutional infrastructure in place, including small finance banks (SFBs), full-scale banks like Bandhan Bank, microfinance institutions or MFIs, fintech companies and peer-to-peer (P2P) platforms, lending money to the underbanked and the underserved segments. Large-scale digitisation also provides easy access to credit, much like what happened in the US. But all these may not augur well in the long run. Experts think India's household debt could become a big burden if job losses happen (unemployment has risen to a 45-year high) and people's income fails to increase. Even now, the economy is witnessing a cyclical and structural shift due to business disruptions, slowdown and the possibility of a global recession. "There are weaknesses in the economy and income levels are not rising fast enough," says Madan Sabnavis, an economist at Mumbai-based CARE Ratings. Given this scenario, the rising household debt has implications for the economy as it will impact households, banks and financial systems and also reduce net financial savings.

Rise of the EMI Culture

The debt level can move up rapidly if Indian youths start spending like their Western counterparts. The demographics are favourable as more youngsters are joining the workforce every day. And unlike the previous generations of careful savers, they are not credit-averse. "Savings, investment and spending patterns change whenever a new generation comes in," says Deepak Chellani, Head of Third Party Products at Mumbai-based stock-broking firm Prabhudas Lilladher. Traditionally, mortgages or housing loans dominated this space. This trend still continues, but new segments are also gaining traction. Personal loans, consumer-durable financing and credit card transactions are on the rise (see graphic Red Flags).

"Most of these new segments are about short-term debts," says Hrushikesh Mehta, Country Manager at ClearScore, a UK-based free credit-checking service provider. According to him, growing access to credit and a new EMI culture for purchasing consumer durables and credit card payments are fuelling the debt culture in India. Personal loans are now extending to areas like foreign travel, wedding and also for repaying old loans.

"The problem gets compounded in recessionary times when job losses are more frequent and purchasing power gets curtailed drastically," says Abhinav Angirish, Founder of Investonline.in, an investment portal. From the debt perspective, defaults will first surface in the personal loan and credit card space, followed by secured car and auto loans. Home loans are the last to be impacted.

The loss of growth in corporate banking segment due to over-leveraging and asset quality deterioration has been compensated by retail growth in terms of mortgages, personal loans and credit cards. "While banks are consolidating their positions in Tier-I and Tier-II cities, non-banking financial institutions such as MFIs are going deep into Tier-III and Tier-IV cities," says Ashish Singhal, Managing Director at Mumbai-based Experian Credit Information Company. Consequently, some private banks have seen their share of unsecured loans rise to 10-15 per cent of total book value. Then there are non-banking financial companies (NBFCs) where unsecured loans account for more than 50 per cent of the loan book. The P2P model is also based on the unsecured loan. "The share of unsecured loan is moving up steadily. These loans are mostly for consumption purposes," says Arun Singh, Chief Economist at Dun and Bradstreet.

The government is also encouraging banks, especially public-sector banks, to provide collateral-free loans. The Mudra loans (provided under the Pradhan Mantri MUDRA Yojana, or PMMY, to non-farming and non-corporate micro and small enterprises) of less than Rs 50,000 are mostly given to the self-employed. However, these loans are witnessing high delinquencies, and loans against property are also facing stress. Incidentally, the entire Mudra loan exposure is around Rs 8 lakh crore. 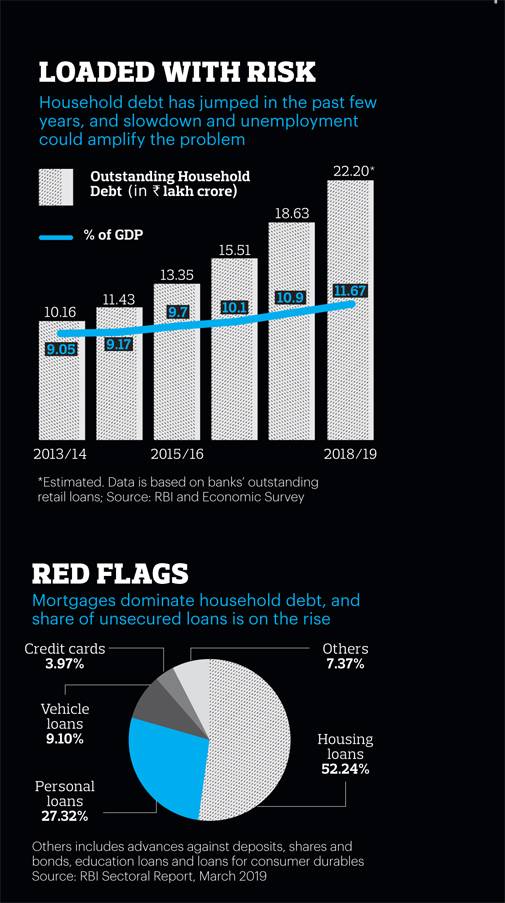 India's household savings rate is consistently falling over the years, every year. This is not surprising, though, as "India is shifting from a savings economy to a borrowing economy", says Singhal of Experian. "Household consumption rate is also increasing, especially led by consumer durables and two-wheelers," he adds.

The rising household debt not only impacts net financial savings but also affects consumption in the long run as disposable income eventually gets depleted. In fact, there is a cascading effect when a household starts cutting back on discretionary spending. A recent example is the automobile sector where the falling growth would have serious implications for steel, tyre, auto ancillary and a host of other industry segments. "In such cases, the real cost of stimulating the economy rises significantly," says Angirish of Investonline.in. A recent study by the Bank of International Settlements (BIS) also pointed out that debt boosts consumption and GDP growth in the short run, but the long-term negative effects of debt eventually outweigh its short-term positive effects. And the household debt ultimately proves to be a drag on growth.

Till Debt Do Us Part