Manu Kaushik | Print Edition: Oct 28, 2012
A nondescript building on the sprawling 30-acre campus of CVR College of Engineering, on the outskirts of Hyderabad, saw a small change last December. The board 'PG Block' on the building was replaced with one that said 'Electrical and Electronics Engineering Block'. It was more than just a name change, though. It marked the end of the management programme the private engineering college had been running since 2006.

"It still hurts to see the sign change," says B. Tejomayi, 22, who will graduate this year as part of the last MBA batch and has yet to find a job. "It is sad because there will be no faculty to fall back upon and consult later in life as an alumna of this institution."

CVR College is one of about 15 engineering institutes that also offer management courses within a three-km radius. "There was not much value being added, with the market flooded with management diplomas," says C. Madhusudana Reddy, Founder, CVR College, explaining his decision to close the programme.

Statistics bear him out. There are about 4,000 business schools approved by the All India Council for Technical Education (AICTE), the regulator for technical education. The number of seats offered in these schools doubled in four years to 3.79 lakh in 2010/11 (see Rapid Growth).

The numbers are not large given that 13 million people join the workforce in India every year, says Ajit Rangnekar, Dean, Indian School of Business (ISB), Hyderabad. But they are huge given that China produces an estimated 40,000 management graduates a year from roughly 200 schools.

"Between 2003 and 2008, a lot of B-schools were set up thanks to strong growth in the economy. But we have seen two downswings since then and many B-schools are facing difficulties," says Ajay Srinivasan, Head, Crisil Research. According to Crisil, on average, only 65 per cent seats were filled in 2011/12. As a result, many institutes are shutting shop. AICTE Chairman S.S. Mantha says the council allowed 101 B-schools to close for the academic year 2012/13. Andhra Pradesh tops the list with 42 such institutes, he says. The gestation period for B-schools is six to seven years... You need time to establish credibility: Apoorva Palkar
The unprecedented rush into management education means that standards at most B-schools are far from satisfactory. Many schools lack well-qualified staff and are illequipped to follow AICTE's norms.

The council, for instance, prescribes a student-teacher ratio of not more than 15:1 for the management and engineering disciplines. But this is often violated. "Institutions are focused on their own value creation rather than creating value for students," says Adil Malia, Group President, Human Resources, Essar Group. Malia says supply from lowrung B-schools is suitable only for low-end jobs. "People who used to recruit plain graduates earlier for sales jobs are now interested in recruiting MBAs," he adds. 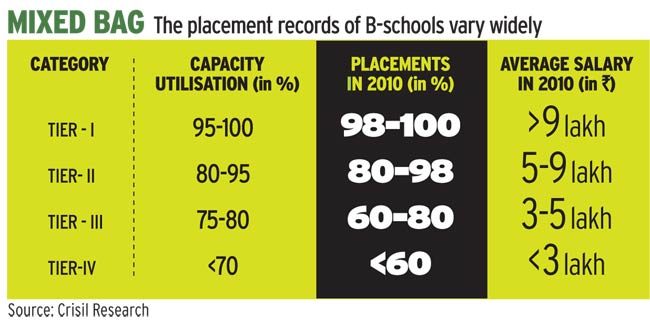 Chennai-based Swamy, who does not wish to reveal his second name, is one of numerous students disappointed with their degrees. Swamy says he could not get an education loan from a bank for his MBA from Sathyabama University, a private institution in the city, in 2006-08. His father, a farmer, had to cough up Rs 3 lakh for his MBA . "While my batch mates joined business process outsourcing (BPO) companies, I wanted to be in finance. So I joined a small company at a salary of just Rs 7,000 a month," he says. Another example is that of a 27-year-old employee of a power-equipment maker in Nashik.

The employee, who did not wish to be named, says he spent Rs 1.25 lakh on his MBA from AICTE-approved Mahatma Gandhi Vidyamandir's Institute of Management and Research in Panchavati, near Nashik. He worked with a BPO company for eight months before joining his current company.

So how much of the blame rests with AICTE? "The council's stance is clear. It wants to increase supply and let the market decide," says Crisil's Srinivasan. AICTE has been criticised for being lax in its approval process. Its reputation has suffered on allegations of corruption as well. In 2009, Ram Avtar Yadav, the then AICTE chief, was removed following graft charges. But Ashok Thakur, Secretary, Higher Education, Ministry of Human Resource Development, backs AICTE. "AICTE has taken action against institutes which are not approved," he says. Mantha says there are some 260 unapproved institutions. "We have informed state governments to shut down unapproved institutes. Some states such as Maharashtra, Tamil Nadu and Madhya Pradesh have taken action, others need to move fast," he says. But is the AICTE approval enough? No, says E. Balaji, Managing Director and CEO, Randstad India, a human resource consultancy. "The quality of education, a decent faculty and industry network are equally important," he adds. Apoorva Palkar, President of the Consortium of Management Education, an association of private business schools in Maharashtra, says not every institute can succeed as the gestation period is six to seven years (see The Business of B-schools on Page 102). "You need time to establish credibility. You also need deep pockets," she says.

Apurv Pandit, Editor of Pagalguy.com, a forum for MBA aspirants and students, says top B-schools are opting for international accreditations such as the one granted by the Florida, US-based Association to Advance Collegiate Schools of Business (AACSB). In December last year ISB became India's first B-school to be accredited by the AACSB. ISB has chosen not to be recognised by AICTE. In April, T.A. Pai Management Institute, Manipal, became the second.

The past few years have seen a proliferation of institutes being set up without AICTE's approval. One such is Dadar College of Management, housed in a high school in central Mumbai. It has only five classrooms, a computer lab and an office. The college is a distance-learning centre of Sikkim Manipal University (SMU). It offers a distance-learning MBA from SMU costing about Rs 53,000 for four semesters. It also claims to offer a "full-time" MBA awarded by SMU that costs an additional Rs 90,000 a year. The university, however, conducts full-time programmes only on its campus in Gangtok, Sikkim.

Closing unapproved institutes is diffi cult as they exploit loopholes in norms to claim they do not come under AICTE's purview: Dhiraj Mathur
A Dadar College official, who asked not to be named, said it is only a distance-learning course but with classes conducted by its faculty. The College is run by Anthayya Education Pvt Ltd, which also has engineering, arts and commerce colleges in Mumbai and Pune. Rakesh Shetty, a Congress politician and one of the directors, declined to comment.

The college claims to enrol students every two to three months for its "full-time" MBA. But N.S. Ramesh Murthy, the SMU's director of distance education, feels differently. He says SMU's centres must take classes for one-tenth of the credit hours for the distance-learning MBA. "They can have more classes and we don't have a say in how much they charge. But they cannot call it a full-time MBA," he says.

The most visible example of a B-school without AICTE approval is the Indian Institute of Planning and Management (IIPM), New Delhi, known for its high-decibel advertising campaigns. IIPM runs 18 branches and has about 4,000 students on its rolls this year. AICTE says IIPM needs its permission as its programmes are technical in nature.

The council has issued notices to IIPM, but a spokesman for the institute says it has obtained stay orders from the Delhi High Court. "We are not providing technical education. Also, the certificate programmes do not come under AICTE purview." The case is sub judice.

In addition to offering a certificate in national economic planning and entrepreneurship, IIPM offers a post-graduate degree from Belgium's International Management Institute (IMI) for its flagship two-year programme.

It also offers a graduate degree in management from IMI for a three-year integrated programme targeted at 10+2 students. No other similar institution does so - only universities can offer management degrees in India. But there's a twist in the tale. The NVAO, the accreditation organisation of the Netherlands and Dutch-speaking part of Belgium, does not recognise IMI, Axel Aerden, a spokesperson for NVAO, told BT via email. IIPM says accreditation is required only if an institute is offering a "Masters" degree and that it does not use the word "Masters" in its post-graduate degree from IMI.

To be sure, IIPM is no different from any other mid-rung B-school. "It has reasonably good infrastructure, faculty and processes. The industry hires students on the basis of talent, not on the basis of the background of the institute," says Saurabh Johri, program advisor at think tank Observer Research Foundation.

Dhiraj Mathur, Executive Director, PricewaterhouseCoopers India, says closing unrecognised institutes is difficult as they exploit loopholes in norms to claim they do not come under AICTE'S purview. Palkar, of the Consortium of Management Education, says AICTE has done a "wonderful job" of communicating to the public and prospective students about the unapproved institutes. But AICTE lacks teeth, something the government aims to change with its Higher Education and Research Bill, 2011.

The bill envisages the setting up of a National Commission of Higher Education and Research, a superregulator that would subsume existing watchdogs such as AICTE and University Grants Commission. The new commission's role would be to combat corruption in various universities and regulatory bodies. The bill is pending before Parliament. Palkar believes there will be consolidation among B-schools in the next four to five years because of poor placements and their impact on student intakes. According to Shrinivas Acharya T., Principal Director, Vishwa Vishwani School of Business, Hyderabad, collaboration among tier-1, tier-2 and tier-3 schools is the need of the hour. "We have approached a few eminent B-schools for mentorship," says Acharya.

As for students, many do not really care about the school's recognition or the quality of the faculty and do not evaluate a college properly, says Pagalguy.com's Pandit. "When these people finally join a school, it takes them two semesters to realise that the education is substandard."