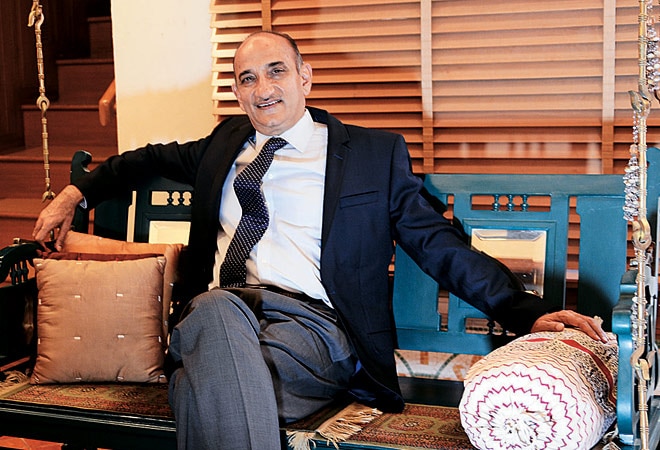 A chance encounter with two fellow passengers on an Ahmedabad-London flight in early 2005 convinced Bhadresh Shah, Founder and Managing Director of AIA Engineering, to change the company's direction.

About Bhadresh K Shah
Shah was heading to London to sign a deal with a private equity (PE) investor. On the nine-hour-long flight, he met J.R. Vyas, Chairman and Managing Director of Dishman Pharmaceuticals & Chemicals, and another entrepreneur from Ahmedabad. While Vyas had raised funds via an initial public offering a year before, the entrepreneur had opted to rope in a PE investor and regretted the decision. Both suggested Shah to avoid PE saying that the conditions these investors impose makes it difficult for a company to operate. "I gave him many examples of companies that suffered because of PE investments," says Vyas. By the time, Shah landed in Heathrow airport, he had made up his mind to not go for private equity.

A few months later, Shah raised Rs 148 crore by selling shares of AIA to the public at Rs 315 a piece. The shares are now trading close to Rs 1,100 on stock exchanges, even after AIA in 2008 split the face value of each share from Rs 10 to Rs 2. And the market valuation of the company, which supplies replacement parts to cement, power and mining companies, is about Rs 11,000 crore. The top and bottom lines have increased, too. Revenue has jumped from Rs 406 crore at the time of the IPO to Rs 2,000 crore in 2013/14 while net profit has surged from Rs 52 crore to Rs 325 crore. "Shah is a very focused entrepreneur," says Vyas. "In the last one-and-a-half decades, he has created a sustainable business model with a focus on the highly competitive exports market."

"I come to office only if I have an appointment. I delegate a lot"

Shah comes from a family of doctors, but was inclined to try something different. After school he got into the Indian Institute of Technology, Kanpur. There, he enrolled into metallurgical and material engineering, after he failed to get the more sought after courses such as electrical, mechanical or chemical engineering. Soon after graduating Shah jumped into business and set up a foundry in 1976. He took on a loan from Central Bank of India while his father also put in some initial capital and joined the company. Shah tapped compressor makers and textile units for supplying metal castings. But soon the clients started complaining about the quality of his products. "It was a difficult start. I was not sure about the direction. I lost all the money in the very first year," he says.

Wiser from the failure, Shah changed tack. "I started applying my mind on offering something useful to customers," he says. In 1977, he shifted from selling parts to original equipment manufacturers to supplying replacement components for power plants. Two years later, he joined hands with a friend to float a new company called Ahmedabad Induction Alloy, which started making steel alloys and iron castings for power plants.

The other nominees: Capital Goods (Mid-sized companies)
Once the business gained traction, Shah started thinking about how to take the company to the next level. In the mid-1980s, Shah approached the Belgium-based industry equipment supplier Magotteaux International for a tie-up aimed at improving his company's technological expertise. But he didn't succeed as Magotteaux was already in talks with a Tata group company and engineering giant Larsen & Toubro for a partnership. Shah finally joined hands with a Belgian consultancy, Slegten SA, in 1988 for design expertise. "It was a turning point for the company," says Shah.

The tie-up with Slegten was so successful that Magotteaux approached Shah to form a joint venture. In March 1991, the new company was incorporated as AIA Magotteaux with a majority 51 per cent equity with the Belgian company and the remaining with Shah. A month later, Shah's Ahmedabad Induction was merged with AIA Magotteaux and his friend moved out of business.

The new entity had a good run until the mid-1990s. But a sudden change of guard at Magotteaux, which was wholly owned by the employees, brought new challenges for Shah. "The new management asked me to join the parent in Belgium as an executive," says Shah, who was also offered a minority stake in the parent company. In 1996, Shah landed in the Magotteaux headquarters. "But somehow it didn't work out. There were a lot of differences," says Shah, who worked in Belgium for one and a half years before coming back to India. That was possibly the worst phase of Shah's career. After he returned to India the Magotteaux management started putting restrictions on exports from the Indian unit. A legal battle followed between the two partners. The issue finally ended when Shah bought back the stake in the Indian unit from Magotteaux.

After Magotteaux's exit, Shah changed the name of the company to AIA Engineering. His main challenge then was to rebuild the company. "I was again on my own without Magotteaux as a marketing partner abroad. I also had very little funds," says Shah. He then started developing the company's international network. Some of his friends in Megotteaux joined him in London where he opened a subsidiary for marketing his products. In fact, they are still with him. In 2008, Shah also started focusing on the mining sector to expand the company's portfolio beyond the power and cement industries. "We initially focused on iron ore mining in Brazil," says Shah. "The share of the mining business will grow in the future."

"Shah is a very focused entrepreneur. In the last one-and-a-half decades, he has created a sustainable business model with a focus on the highly competitive exports market"

AIA now has four factories - one each in Ahmedabad, Nagpur, Bangalore and Trichy. Exports contribute more than two-thirds to its revenue. The company is debt free. "There is no need for debt," says Shah, who has cash reserves and surplus of close to Rs 2,000 crore. He adds that he expects the company to grow at 15 to 20 per cent every year. Growth, however, may not be the biggest challenge facing the company. Who will take the baton after Shah in the future is what investors are worried about. Shah owns a 61.65 per cent stake in AIA while the remaining is held by foreign and Indian institutions and public investors. "At the board level, my daughters would join," says Shah. He has two daughters - one is a fashion designer and another has interest in chocolate making.

Shah's wife is also not interested in business, though she shares his interest in philosophy. Shah also has keen interest in history and loves to read about Napoleon Bonaparte. Like the French ruler who conquered much of Europe, Shah is also spreading his business outside his home country. But he doesn't worry much about the future and enjoys the present. He plays golf four times a week and his phone generally goes in the sleep mode after 4 pm "I come to office only if I have an appointment," he says. "I delegate a lot."