Krishnakumar Natarajan managed to turbocharge growth just when the markets had turned negative on his company. 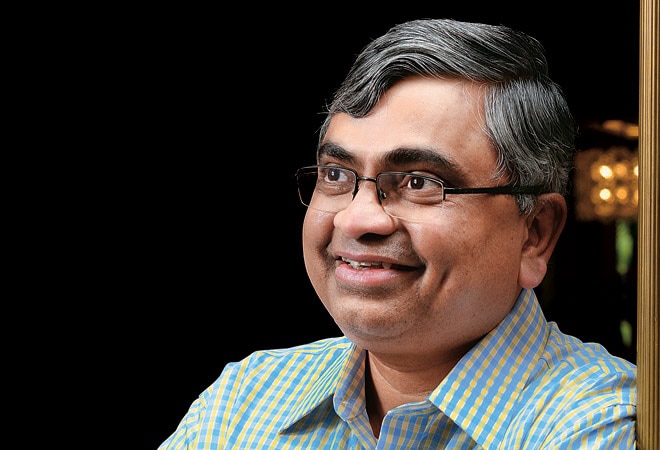 Amiable, convivial and genial are some of the adjectives used to describe Krishnakumar Natarajan, or KK, the easygoing CEO of Mindtree. In January 2011, though, nothing was going easy for the Bangalore-based IT and outsourcing company, which was co-founded by KK, Ashok Soota, one of Indian IT's grand old man, among others, in 1999. Soota, who was then the Executive Chairman, decided to part ways with Mindtree (KK was the CEO), and there were questions on whether the company would survive, let alone thrive.

About Krishnakumar Natarajan
So, how did KK, 57, manage to turbocharge growth just when the markets had turned negative on his company? For this it is important to understand KK's background. Beneath the ever smiling face is a steely resolve which is deployed when it matters. He realised this when he was in Class X (matriculation), a rite of passage for students in India, which helps them determine their future. An average student in his own words, KK suddenly decided to focus on his studies one day without any goading of his railway doctor father and homemaker mother. When the results came out, he had not only topped his school but also came 12th in Tamil Nadu. "That is when I realised that if I set my mind to something I could achieve it. There was no trigger or push factor. I just felt I wanted to do it and I did it," he says.

When he joined College of Engineering, Guindy, in Tamil Nadu, his love for sports, table tennis and badminton in particular, combined with excellence in academics, meant that he was very popular and was elected president of the college union in his final year. The college, which came under the University of Madras, was later renamed Anna University. This had a deleterious impact on the students who wanted to go abroad to study - the University of Madras brand was well accepted, but Anna's was new. So students requested that for those who had already enrolled, certificates should be issued under the University of Madras moniker, a demand which was refused. When the then President of India was supposed to visit the university, KK called for a strike to have their demand acceded to. The college authorities were forced to oblige. "When required I can take tough decisions. One need not thump the table and raise the voice to be effective," avers KK.

After engineering and an MBA from XLRI, Jamshedpur, KK says he had job offers from Tata Burroughs, HCL and ORG (Operations Research Group), an IT company promoted by Sarabhai family. He chose ORG, but when the promoters did not show much inclination towards the business, Ashok Narasimhan, the man who kickstarted Wipro's IT foray, hired him. KK worked with Wipro from 1982 to 1999 and was responsible for growing the company's e-commerce and financial solutions business. He also served as the HR head of company's IT services division. It was at Wipro that KK met his wife, Akila, who now heads Social Venture Partners.

At Mindtree, KK had to once move against his one-time boss and mentor Soota when strategic differences arose among its founders on where the company should invest its time and resources in. "It was not easy (to go against) Ashok. After all, he was my boss at Wipro and, more than that, somebody whom I respect and like. But in the larger interest of the company and other stakeholders, I had to take some tough decisions and I did," said KK.

After Soota left, Mindtree had to quickly reinvent its strategy to stay relevant. A big part of that move was to focus on select areas and hack through internal layers, to bring the company closer to customers. That meant letting go of a 'long tail' of customers. From about 306 customers, the company pruned the list to around 200. "Some of the customers were too small. We looked at whether there was scope for a long term relationship and if we could scale. Also, another factor was what we would learn from the engagement. If none of the right brackets ticked, we had to let them go and focus on our other customers," said KK.

"I didn't want to load up on debt. There is room for everybody, large, mid and small firms. Mindtree's greatest testament comes from our growing number of satisfied customers"

Instead of competing with large players in all segments head on, Mindtree stressed on areas such as testing and application maintenance, travel, hospitality, among others, where it could hope to emerge as a player of some size and scale.

As Sudin Apte, Research Director and CEO at Offshore Insights, a sourcing advisory firm, says: "It [Mindtree] clearly has made some smart moves, which have paid off. But it has a long way to go. Remember its original promise was to become a $1 billion in revenue company by 2014 and they are just over half of that. Meanwhile, even the goalpost on what constitutes a Tier-II company has moved. Now Tier-I players are $10 billion-plus in revenue and Tier-II are $1 billion-plus in revenue. They are an interesting Tier-III player."

The other nominees: IT/ITES (Mid-sized companies)
Sanchit Vir Gogia, Chief Analyst and CEO at Greyhound Research, says while KK has done a good job of holding the company together and steering it onto a path of high growth, more needs to be done. "It [Mindtree] may compete with a Virtusa (another IT firm of similar size) and win a contract, but the IT outsourcing and offshoring story is fundamentally shifting, and Mindtree needs to invest in emerging areas quickly if it wants to sustain growth and margins. It has to seriously explore larger inorganic growth strategies."

KK, however, feels Mindtree was not in a position to make such large moves when both Satyam Computer and Patni [acquisition] opportunities came up. "I didn't want to load up on debt. There is room for everybody, large, mid and small firms. Mindtree's greatest testament comes from our growing number of satisfied customers."

In a game of table tennis, KK has clearly come back from behind to win a 'set', but whether he can win the match for Mindtree, remains to be seen.