Of Milk and Honey

Surekha Vijay Kale, 27, a goatherd, earns Rs 150 to Rs 200 per month selling milk and doing odd jobs. Once in four months she sells a goat and earns up to Rs 8,000. Thanks to a six-day goatrearing course, she has learnt about vaccines, de-worming, feeding and cures for common ailments affecting the hircine species. "I am now able to take care of my goats. They fetch me good returns," says Kale.

Meenakshi Mahajan, 33, an entrepreneur, has been running a college canteen and a hostel mess for girls for the last few years. She also takes catering orders for parties, festivals and birthdays. Mahajan is now a successful food entrepreneur, with a 12-member staff, and earns about Rs 25,000 per month after all expenses are paid. The credit for Kale and Mahajan turning entrepreneurs goes to Mann Deshi Udyogini, a 'B-school ' for rural women in Mhaswad, in Maharashtra's Satara district. Mann Deshi Udyogini is not your average B-school and its students are most unlike typical management students. They are goatherds, vegetable vendors, roadside tea sellers, daily-wage labourers and homemakers, among other things. The classrooms are also unusual. The goat herding course, for instance, is taught in the fields. The school offers approximately 19 skill-development courses. While goat rearing and veterinary courses are in demand, there are others that are equally popular, such as tailoring, bag making and blanket making. In addition, the institute offers computer training, English language training, and personality development programmes.

The duration of each course varies from just a day to three months, and schedules are often adjusted to suit the women. Admission fees range between Rs 10 and Rs 650, depending on the course.

Mann Deshi Udyogini was founded by social activist Chetna Gala Sinha in 2006 with the support of HSBC Bank. The business school is run by Sinha's Mann Deshi foundation. Apart from the school, the foundation runs a bank, Mann Deshi Mahila Sahakari Bank, which provides financial access to rural women, and a community radio station for the people of Mhaswad. One of Mann Deshi Udyogini's mobile business schools during a stop at Mahabaleshwarwadi, in Maharashtra's Satara district.
For the women of Mhaswad and surrounding regions, the school is a godsend. Once a prosperous village with a thriving handloom weaving industry and productive cotton fields, it is now drought prone. Most of its men have either migrated to cities or are unemployed. In most households, women have to provide for their families. In the last five to six years, Mhaswad has turned into a community of goatherds, shepherds and daily-wage earners.

The institute targets school dropouts and women without formal education, training them to become entrepreneurs through vocational courses and shake off the shackles of poverty. "Our mission is to not only impart training but also make these women financially independent, selfsufficient and confident," says Sinha, who is fondly called bhabhi or didi by the villagers.

The rural B-school has not been built on any particular model. Sinha explains that it has taken into account the learning demands of students in designing its technical or vocational courses. "Through selfhelp groups, we continually survey grassroots demand to identify courses that will most benefit students. This is to ensure that the skills offered through the courses have real value and demand in the marketplace," says Sinha. 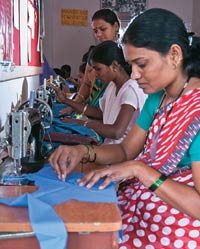 A tailoring class
Each course has three important components: technical skills, financial literacy/marketing skills and confidence building. Technical training accounts for nearly 60 per cent of the course. After the training, students are given financial training customised to their profession. This helps new entrepreneurs make sound financial decisions as they start their businesses, take loans and expand over the long run. Mann Deshi also gets already successful entrepreneurs to share their success stories with the women to motivate them.

Today, many of the women entrepreneurs sell their products in local markets as well as to organisations. Bharti Bhosle makes and sells leather and cotton bags, cushions, pouches and blankets in Mhaswad and nearby markets. Her products are also procured by the Pune-based Smile Vishram organisation. "We have been procuring goods from Bhosle over the last year and selling them in our stores in Pune. The finish and the materials used are very good," says Pradeepta Kulkarni, a senior supervisor at Smile Vishram.

Participants learn essential business strategies, such as how to manage their working capital, set up a distribution channel and develop a marketing strategy," explains Vanita Shinde, Chief Administrative Officer of Mann Deshi Udyogini.

In an effort to reach out to more women, Sinha decided to launch a Mobile Business School (MBS). This is a bus equipped with tailoring machines and laptops, which goes to remote villages and helps women learn skills. Today, Udyogini runs five branches of its business school and two Mobile Business Schools in association with Bonita Trust, Godfrey Philips and Vitol Foundation. In the past year, it has trained over 20,000 women, half of whom attended its mobile schools. "Udyogini's mission is to train and create one million entrepreneurs," says Sinha.

In order to supplement the B-school learning, Sinha launched a community radio station in 2008. The station, named Mann Deshi Tarang, provides the people of Mhaswad a platform to voice concerns, express creativity, promote development and preserve their culture. It broadcasts programmes on financial literacy, marketing, child and health care for an hour each in the morning and evening.

Mann Deshi Udyogini has attracted interns from foreign universities such as Yale Business School, Harvard Business School and Columbia University for developmental studies. Barring Mumbai's S.P. Jain Institute of Management and Research, the interest among top Indian B-schools has been tepid. Sinha's institute offers two types of internship, a summer internship and a volunteer programme, where an intern chooses a particular project and works on it for at least for four months. Emily Rose Tormey, 21, currently an undergraduate at Yale, interned with Mann Deshi Udyogini between June and August this year.

Describing her experience, she says: "One of the nicest things about working with Mann Deshi is that it gives interns a lot of freedom to choose which project they would like to work on. I expressed interest in working with the Chamber of Commerce, one of the newest programmes under the Udyogini Business School."

During her internship, Tormey says she learnt about microfinance and non-profit operations. "Although Yale gave me a theoretical and academic foundation, in India I was able to develop an understanding of what it takes to make an organisation of Mann Deshi's calibre run."

Over the years, the school has become a symbol of empowerment for women trying to shake off the shackles of poverty. It operates only in Maharashtra, but work is on to replicate the model in Assam. Plans are also being drawn up to start similar schools in Gujarat and Jharkhand. Someday Sinha's Udyogini may well empower rural women in different parts of the country.

Far from the madding crowd