A tale of two cities: Bengaluru retains its spot as India's start-up capital but Delhi-NCR is fast catching up On a fiery june evening, start-up accelerator GSF organised a tete-a-tete with Tej Kapoor, the India Managing Director of Chinese investor firm Fosun RZ Capital. But it wasn't a private conversation between two people. Many start-up founders started trickling in at the Bombay Sandwich Company, a new cafe in Gurgaon, the venue for the discussion.

Rajesh Sawhney, Co-founder of food-tech firm InnerChef, which owns the cafe, ordered for a round of cutting chai. He sat in one corner explaining his mission. "Sandwich is a very exciting category. We have an alternative vision of sandwich from Subway," he says. "Subway is a mayo sandwich; we are a chutney sandwich. Our vision is to take Bombay to the world. The market looks very large." Gurgaon is a good test market for such a cafe - residents are early adopters of new trends, and are willing to pay more for a better experience or trying out new concepts. All this is good news for start-ups. Only a few days back, Sawhney posted on LinkedIn: "Gurgaon could become the No.1 start-up hub of India soon."

"I know that this will startle my friends in Bangalore, but I am seeing so much action here. Innovative start-ups are sprouting in fintech, mobility, robotics, media-tech, food-tech, digital health and more. The Gurgaon tech ecosystem is attracting both talent and capital from across the world. I see Gurgaon and Bangalore fighting it out for the coveted No.1 spot in 2019," he added to the post.

Sawhney isn't someone who takes wild potshots. Apart from InnerChef, he has made 70 angel investments, including Viki (acquired by Rakutan for $225 million), Little Eye Labs (acquired by Facebook), WeAreHolidays (acquired by a director of Cox & Kings), InstaLively (acquired by Hike Messenger) and NightStay (acquired by Paytm), among others. He sees the three ingredients required for a start-up hub - talent, market and capital - converging in Gurgaon, and by extension, in the National Capital Region (NCR). "This is the biggest consumption market in the country. The sheer volume makes it exciting as a test bed," he says.

Bengaluru could be a smaller consumption market but it has seen the convergence of many factors over the last few decades which have transformed it into a bustling metropolis. Today, more than 100 multinationals operate out of Bengaluru; the city plays host to the biggest tech companies and has way more start-ups than any other Indian city. But that is hardly the complete story.

It is imperative to look at how India fares before peeking into the NCR versus Bengaluru story. If you happen to flip through the Nasscom-Zinnov Indian Tech Start-up Ecosystem report of 2018, there is heart warming stuff. The year saw many unicorns (start-ups with a valuation of a billion dollars and above), resurgence in investments, and rapid growth. India has the highest number of unicorn start-ups after the US and China with 18 unicorns out of 250-plus globally. India has the third-largest start-up ecosystem in the world. "Multiple indicators show that the Indian start-up ecosystem is approaching escape velocity, and is setting itself up for a period of sustained growth. The total number of Indian unicorns more than doubled, with eight start-ups being added to the list - the highest in any year till date. The number of advanced technology start-ups increased by 50 per cent from 2017, with data analytics, Artificial Intelligence and IoT witnessing the fastest adoption. The Indian start-up ecosystem continued to attract investor interest with almost $4.2 billion of funding in 2018 (January to September), demonstrating 108 per cent growth over the same period in 2017," the report states.

India is also seeing a heterogeneous mix of start-ups. The number of women founders has increased to 14 per cent in 2018 from 11 per cent in 2017; more Tier 2/Tier 3 cities are emerging as start-up hubs; and more experienced professionals are taking the entrepreneurial route, the report states.

Time taken to become a unicorn appears to be shrinking as well. Udaan, a business-to-business trading platform, became a unicorn in about 26 months, the fastest in India. Based in Bengaluru, Udaan is founded by a team of former Flipkart employees. Flipkart, the poster child of Indian start-ups, was acquired in 2018 by Walmart Inc. for $16 billion, one of the biggest tech acquisitions in history and an exit that proved large-scale returns to investors were in the realm of the possible. Flipkart, too, is based in Bengaluru. 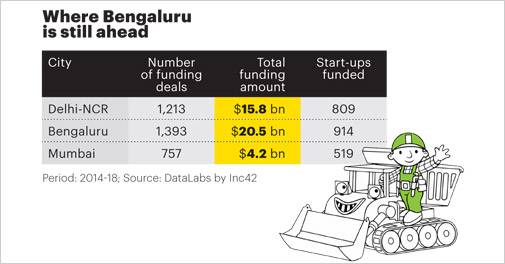 Between 2014 and 2018, Bengaluru's start-ups raised $20.5 billion versus Delhi-NCR's $15.8 billion, according to media company Inc42's research division, DataLabs. Mumbai is a distant third with a total funding amount of only $4.2 billion. Bengaluru also led NCR in the overall number of start-ups that got funded in this period - 914 versus 809 for Delhi-NCR.

Nevertheless, the funding growth rate between 2014 and 2018 is far higher for Delhi-NCR (validation of Sawhney's hunch), and so is the growth in the average ticket size. While the funding CAGR for Delhi-NCR was nearly 30 per cent, for Bengaluru, it was 15 per cent.

Another interesting facet is that in NCR, the contribution of the top five funded start-ups (ReNew Power, Paytm, Snapdeal, OYO and Zomato) as a percentage of the overall funding in the city was about 54 per cent ($8.51 billion). In contrast, the top five funded start-ups of Bengaluru (Flipkart, Ola, Swiggy, BYJU's and BigBasket) contributed 61 per cent ($12.53 billion). 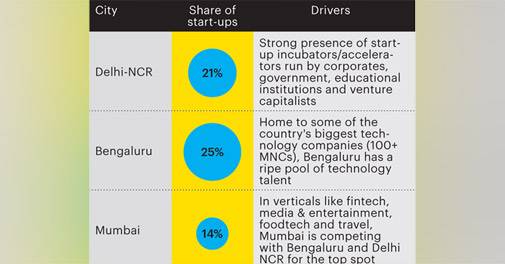 Data compiled by another research firm, Venture Intelligence, shows that there are currently about 22 unicorns in India. NCR has a slight edge - 10 unicorns versus Bengaluru's nine.

NCR must have gotten something right.

By late evening, the GSF tete-a-tete was a packed house that had discussed everything from super apps to where the Chinese start-up ecosystem was trumping the Americans. One of the participants was Anup Jain, Managing Partner at Orios Venture Partners, an early stage investor. He had clear views on where NCR was winning.

"Bengaluru has created a pool of tech talent, which is necessary for start-ups to succeed. The city has also become a hub for a lot of south-based talent to migrate to. It has the best weather in the country; it helps productivity," says Jain. On the other hand, Bengaluru was never meant to deal with the kind of congestion, growth and population it has now.

"This is a city that has grown beyond proportion. They don't have the infrastructure. Various pockets have emerged and they are all far away from the biggest hub of transportation, which is the airport. You waste so much time travelling from the airport to any other hub in the city - whether it is MG Road, or Electronic City, or the Outer Ring Road, or Koramangala. Productivity for the entire ecosystem suffers as a result. You are late for meetings; you have to budget more time. Movement within the city is extremely difficult. You can't do more than two meetings in a day," Jain adds in a huff.

Ola Mobility Institute's Ease of Moving survey echoes the observation. "Traffic in Bengaluru has grown exponentially over the last decade-and-a-half, and has now become a real challenge. Travel during peak hour traffic takes an average of 162 per cent more time than the same distance travelled during off-peak hours," the report states. This exploding traffic has reduced the average vehicular speed on roads, according to data from Ola. With an average speed of 16.5 km per hour in 2018, Bengaluru has the third lowest average speed after Kolkata and Patna. So, even affordable and cheap public transport is not attractive. The city prefers zipping through its congested roads on its many two- and four-wheelers since over 70 per cent of those in the city do not find public transit comfortable or time-saving. "Such high-density vehicular movement powered by unclean fuels is responsible for the 37 per cent of total PM 2.5, PM 10, SO2 and CO2 emissions in the city," the report adds. 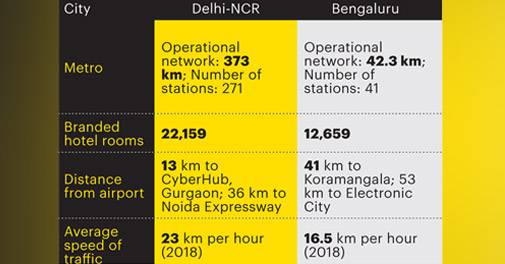 NCR has severe pollution problems as well but beats Bengaluru hands down in infrastructure. According to the Ola Mobility Institute, Delhi's average speed on roads is around 23 km per hour, and while this seems low, it is still far higher than Bengaluru's. Reaching Gurgaon or the centre of Delhi from the airport isn't a big deal; it is a mere 13 km to CyberHub and 15 km to Rajiv Chowk (Connaught Place). Delhi also has nine times the operational network of metro (373 km) versus Bengaluru (42 km).

"The metro lines running through all parts of Delhi means that talent from anywhere can work anywhere. An affordable cost of living is important for young people in a high-cost metropolis," Jain says. Delhi, he adds, also has a lot more availability of hotel rooms and that is significant since a lot of strategic investors travel to either Delhi or Mumbai.

Ask most start-up founders on why they decided to be in Bengaluru, and nearly everyone would call out a host of factors that ends with "talent".

Sujeet Kumar, Co-founder of Udaan, was the former President of Operations at Flipkart. He stayed in Delhi for many years before migrating to Bengaluru. "A start-up needs loads of things beyond infrastructure. It needs an ecosystem, it needs culture," he says. "The next layer is talent and openness, more awareness of start-ups. In these parameters, Bengaluru is far, far ahead." 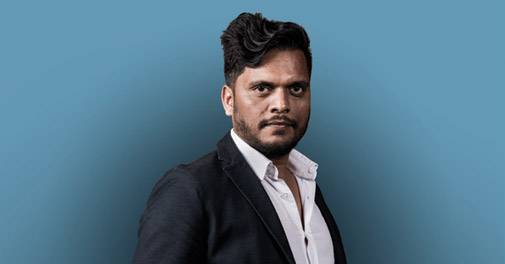 The southern city's high density of entrepreneurs and tech talent has a long history. It probably started in 1983 when seven engineers decided to relocate their start-up, Infosys, from Pune to then Bangalore. Over the next two decades, the city became a hub for IT services and technology research and development centres. The start-up fever caught on around 2007-08, and Flipkart was born.

"People are now relocating to Bengaluru for the next level of growth. I have seen this a lot during our hiring - especially top level talent with 15-16 years of experience. The common reasons I heard were 'learning', 'development', 'the epicentre of change is Bengaluru'," Kumar says.

Amit Kumar Agarwal, Founder and CEO of NoBroker, a non-broker real estate marketplace, estimates Bengaluru is 10-30 per cent more expensive in cost of technical talent. "This is one of the prominent reasons for why start-ups in the future would explore NCR as a second hub for their team centres. Bengaluru start-ups are facing tough competition in terms of attracting talent within the city, especially if they want costs to be within a range," he says.

What is more difficult for Delhi-NCR to replicate is Bengaluru's culture. Founders like Agarwal decided to be in Bengaluru because they felt that the ability to take risk is higher in the city's working population. Culture, however, goes beyond taking risks.

A start-up founder from a unicorn who didn't want to be named, shares his observation. "NCR has a show-off culture versus people in Bengaluru who think of themselves as problem solvers. It is less about big cars and villas. A Starbucks in Bengaluru is filled with founders discussing ideas or meeting potential employees. In Delhi, the discussion in Starbucks is around lifestyle," he says.

The same founder also noticed that most investors in Delhi prefer meeting in five-star hotels. The hotspot, these days, is Aerocity, a hub of hotels and plush offices near the city's international airport. "You will find the same venture capitalists in cafes once they are in Bengaluru," he says, bursting into laughter.

Besides the concentration of talent, capital, and markets, it is factors such as these that makes Bengaluru a distant cousin to other hubs. While NCR is well poised for a tough fight, it is difficult to replicate Bengaluru's X factor.