Learning On The Go

Zishaan Hayath and Hemanth Goteti of Toppr.Com aim to have a user base of five million students by 2017. 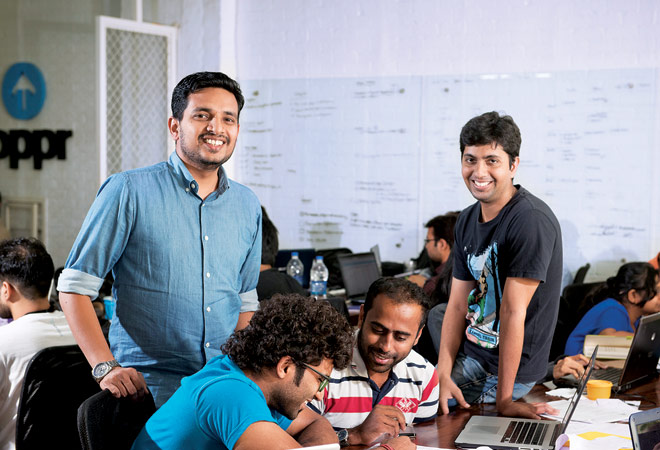 If you have a child who is preparing for a big exam, the last thing you would want him to do is spend time on the phone.

Toppr.com turns a phone into a study aide by helping students prepare for tests through its website and app. "The students can download the app and test what they have learnt in physics, chemistry, mathematics and biology," says Hayath.

The company, started in April 2013, says it has more than 1.5 lakh users. The revenue model is part-free and part-paid. Users can access some chapters without paying anything. For the rest, they have to pay Rs 4,000 per year. The company says it has 15,000 paid users.

The duo is confident that the user base will hit the one-million mark by the end of this year, generating a revenue of Rs 1 crore. It expects that most users will access content via the app, which is available on both Android and iOS platforms. Right now, around 40 per cent users prefer the app, says Goteti.

The business model looks attractive on the face of it. However, the fact is that most online education companies in India are not profitable. This is because the number of paid users vis-à-vis total users is low. "Most online education companies find it difficult to convert users into paid subscribers. Students sign up but drop out when they have to pay. Brick-and-mortar tutorials that also offer online courses work better than pure online tutorials," says a partner at a private equity fund that has invested in a brick-and-mortar tutorial company.

Deepa Bhushan, director of schools, Billabong High International, a chain of K12 schools, says online tutorials will grow but not at the cost of brick-and-mortar coaching centres. "Online tutorials are emerging as a good source of practice but most students will not give up going to a class just because an online tutorial is offering them practice at a fraction of the cost."

But Toppr.com founders are bullish. "In March, we added 40,000 users, and in April another 50,000," says a confident Hayath, who says they hope to hit the five-million user mark by 2017. "If we succeed in getting five million users, we will become profitable," he says.

The founders are aware of the challenges. Hayath, for instance, concedes that the dropout rate is high in online education, but says that this is true of offerings that try to replace classroom education (like Coursera, an online platform that gives access to courses from various American universities). "Instead of going to a college, you say you will take an online degree. In such a case, the tendency is that you pay for 20 classes but drop out after attending five. But if you are registered in a non-online course and are using online education as a supplement, the dropout rates are low as you are then learning continuously," Hayath says. The other challenges, says the company, are reaching out to users in remote areas and issues of online payments and internet penetration.

"We are not trying to replace classrooms. We are trying to enhance classroom learning," says Goteti. Toppr.com has 100 employees. In addition, it has close to 1,000 IIT students who prepare question papers on a part-time basis. This has ensured that with 100,000 questions, Toppr.com is seven times bigger than the next competitor.

The company is growing 50 per cent month-on-month and has raised $2 million from SAIF Partners and Helion Ventures. The growth will continue, say the founders, as it is a matter of time before people turn to online education. "If you asked someone in 2008 if he would buy a shoe online, he would have said no. But today, so many people buy shoes online. So, it will take time for online education to take off. We have to start now so that we are ready when people are ready," says Hayath.

This is not the first time the two have come together. They had set up a mobile commerce business in 2008, Choupaaty Bazaar, which they sold to Future Group in 2010. And this is not the first time they have taken risk in a new business. They had ventured into mobile commerce at a time when the market was at a nascent stage and say that taking risk and doing things outside their comfort zone is in their DNA. "Most of my business decisions are based on what others are not doing," says Goteti.