Kaushal Dugar is not your conventional Marwari entrepreneur - instead of falling back on his family business, he wanted to do his own stuff. When aged six, he started a book lending library and signed up his friends as paying clients. At the Singapore Management University on scholarship, he became the founder-president of an entrepreneurship society for students. On graduation, he "charmed" two wealthy Singaporeans into lending him a BMW and a Maserati Quattroporte to start a limo service in the city-state. Now, at 30, Dugar dreams of making history by creating an international Indian tea brand. His tool: the Internet and technology.

"It is a 200-year-old industry and nothing has changed at all," rues Dugar, son of a small-town tea-estate machinery supplier in the Darjeeling foothills. "There is no global Indian brand in tea," he says, arguing Tetley may be Tata Tea-owned, but it is still a British brand. And the resident of Siliguri, the biggest commercial hub in North Bengal and a 60-120 minutes' drive from Darjeeling's tea-growing hills - depending on the estate's locations - hopes his brand Teabox will fill the void.

Dugar's fledgling company Teaxpress Pvt. Ltd, founded in 2012, sources teas directly from the gardens in Darjeeling, Assam and the Nilgiris. He removes impurities such as leaf stalks, tastes the teas for flavour, labels and packages them accordingly in 100-gm vacuumed containers under the Teabox brand, a name suggested by his designer-wife Prachi, and posts the details on his website - the garden of origin, time of bloom and date of plucking as done by vineyards.

Buyers are also offered options such as 'auto-delivery', which ensures delivery orders can be met on a fixed day, depending on the frequency of the need, without the customer needing to visit the site repeatedly. In the offing is a 'subscription' offer, where a buyer can 'subscribe' to Teabox varieties, with Dugar choosing the variety for a particular despatch. "This way I introduce them to a wider range of teas," he says.

By skipping the auction process, Dugar whittles down the delivery time to about one week that helps retain the aroma and freshness. To help in the process, he plans to set up warehousing facilities in Europe in the near future.

In the traditional, more widely used method of distribution, tea travels from the producing estate to auctions, where it is picked up by the local exporter, then sold to overseas importers or wholesalers, who supply to retailers for sale to the consumer. Delivery can take anywhere between three and six months. "There is no assurance how long the delivery time would be," says Ashok Kumar, producer of premium Darjeeling teas and a supplier to Teaxpress, who believes Dugar's model will fetch him better prices, as his teas will be fresher when they reach the final consumer.

There are sceptics. Independent tea industry consultant Soumitra Basu says the very nature of Dugar's business model will fetter his growth in India's 980-miilion kg market, 55 per cent of which is accounted for by branded teas. "Exporters need to sample the tea, which is done in auctions," says Basu, who formerly worked with J. Thomas & Co. Pvt. Ltd, the world's largest tea auctioneers. "This can't be so with teas sold through the Net. He'll never reach big volumes, I'd say annual sales will be in the 30,000-50,000 kg range, tops."

Plus, Basu says, there are many small companies selling teas online which Teaxpress will have to compete with, both at home and overseas. But Dugar is unfazed: "The main difference is we are at the source - no other foreign competitor is at the source and gets teas within 24-48 hours after production or has its infrastructure in the tea growing regions."

Dugar also acknowledges the presence of domestic competition such as Nathmulls and Goldentips, who "have been in this business since the last 80-plus years". But he is pulling back no punches to expand his customer base, especially overseas, one ploy being handing free samples of new teas along with ordered teas, as well as specially designed gift packs. 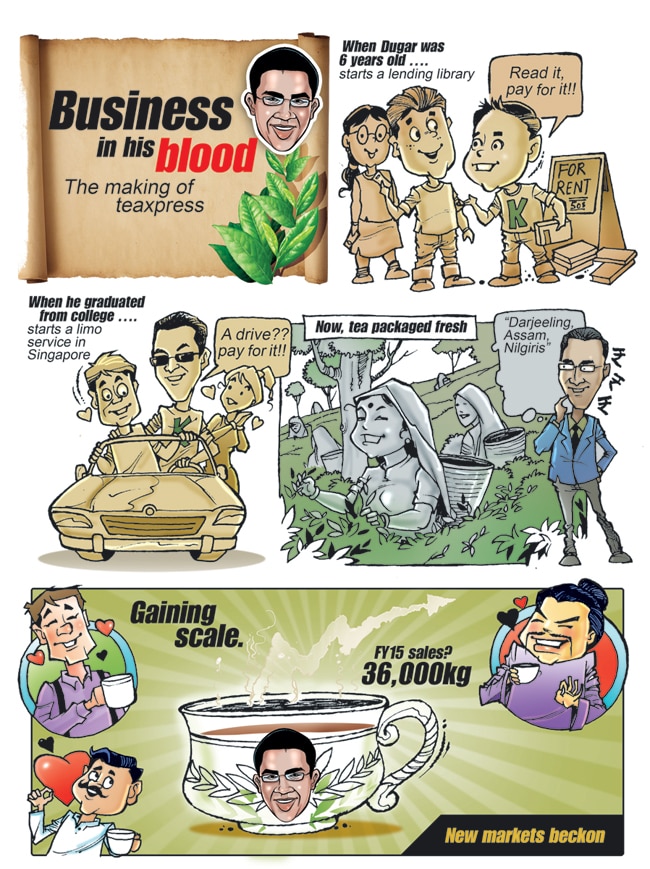 Illustrations By Ajay Thakuri
That way, he says, the buyer learns of other varieties to try out. "The idea is to offer a tea experience," says Kumar, who believes Dugar's online marketing strategy is "potentially huge". On his part, Dugar boasts, no Indian tea company uses technology the way his does. "We are the only tea company which has a dedicated tech team," he says. "We are using tech to create processes for each aspect of our operations, which has never been done in the industry."

For example, Dugar's tech team uses SEO (search engine optimisation) technique to ensure anyone searching for Darjeeling tea gets to know of Teabox quite early in the search. Individuals from across the world place orders online, including from newer markets such as Ivory Coast. Japan and China are on his sights next, and Dugar has plans to launch local language websites in these two countries to reach out to customers there. In fact, tea estate owner Kumar says, Japan and China could be the next big destination for India's branded tea exporters.

Dugar also uses technology in areas such as store front management and supply chain to sharpen operations. "We use customer analytics data to figure out what products sell and do not sell, and create promotions and marketing campaigns accordingly."

Dugar says he is also according significant weight to supply chain management. "We heavily use tech to streamline supply chain. For example, depending on the country, the system can select which courier companies to use where."

And, several improvements are in the offing. "We are automating the entire order tracking system - right from the time when you order till you receive the shipment, everything will be tracked," he says. Work is also in progress to create an inventory model to figure out what quantities to purchase depending on parameters such as past sales region-wise, internal rankings of the tea, cost and quality. The investment in technology, he acknowledges, is going to eat into profitability. "We are not profitable and we don't expect to be profitable for the near future because of our aggressive investments in talent and supply chain to sustain future growth," he says. "Our target is break even in 2017."

In a nod to his business model, venture capital firms Accel Partners and Singapore's Horizon Ventures have invested undisclosed sums in Teaxpress. Dugar won't specify the investment lined up over the next few months, except for saying: "It's in crores", and his backers are not spilling either. "It's a small seed amount, we'll scale it up later," says Prashanth Prakash, partner at Accel, the VC investor behind Indian online success stories Myntra and Flipkart. "We start small, like we did with Flipkart."

But Prashanth concedes his firm "saw a global potential in his venture", and apart from funds, is providing office space to Teaxpress in its Bangalore premises. There are several factors for the support. First, Dugar was not new to the tea business, having grown up in a family tied to the tea trade in Siliguri. Second, Dugar "already had international exposure," given his stint at Singapore, where he also worked for KPMG as a strategic consultant before returning home. And finally, Prashanth says, the business model appealed to Accel, a past master at funding online start-ups. "We have seen the power of online business."

Dugar, who plans to scale up sales three times annually, eyeing volumes of 36,000 kg in 2014/15, is already eyeing premier B-schools such as Harvard and the Indian Institutes of Management (IIM) for talent, unheard of in the tea sector.

At 20 employees posted in Siliguri and Bangalore, his team may be small, but Dugar wants to expand, and hopes to seal talks shortly with an IIM-Calcutta graduate to oversee his European logistics strategy. He also says he's being goaded by mentors at Accel to tap into Harvard as well. "Finding talent in Siliguri is a headache," Dugar quips wryly.