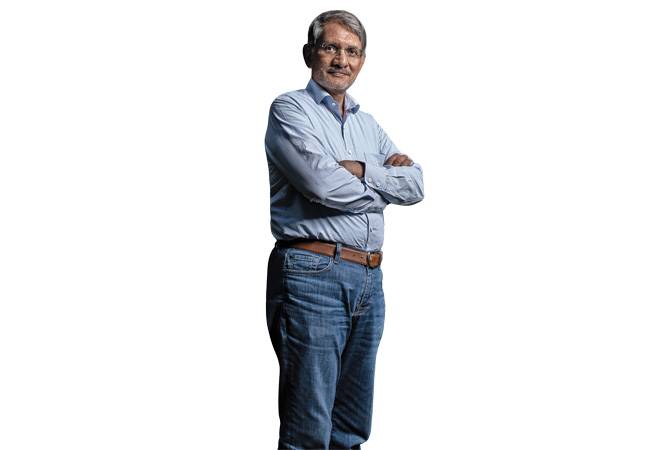 In January 2009, Canadian equipment manufacturer Nortel filed for bankruptcy protection in both Canada and the US. At the time, Nortel held a little less than 10 per cent stake in the Indian product engineering company Sasken Technologies, and was also one of its top five customers, contributing about 10 per cent of the revenue.

This was just the first of the many blows that Sasken had to weather in the coming years. The next one came when chipmaker Texas Instruments strategically shifted its business focus and moved away from the smartphone and tablet business as its open multimedia application platform had lost ground to rivals such as Qualcomm and Nvidia. The third blow came when handset maker Nokia's (once Sasken's top customer) business started going down. Starting 2009, within a short span of time, Sasken lost three of its biggest accounts. That is when the company decided to try its hand at traditional IT services.

For this, Sasken got on board Anjan Lahiri as CEO in August 2013. A co-founder of Mindtree, Lahiri is also known as a 'transformation specialist'. In a company statement, Rajiv C. Mody, Chairman and Managing Director, had said: "Sasken's leadership in communication and embedded systems, combined with Anjan's experience in IT services across several verticals, is synergistic." But Lahiri's stay was short lived and he left after just over a year. The exit was attributed to alleged differences with Mody over the direction that Sasken would take. By then, the leadership at the Bengaluru-based company felt that IT services was an over-crowded space where competition was stiff. It decided to shift the focus back to its core capabilities in wireless technology. "We did a whole exercise with McKinsey and that's when we went back to our core strengths (wireless and embedded solutions) and added a new dimension on digital offerings. That was the direction we took in 2014/15," says Mody, who is also the CEO.

Today, the company calls itself a specialist in product engineering and digital transformation, providing R&D services in semiconductor, automotive, industrial, smart device and wearable, SatCom and transportation industries. Its new capabilities such as Cloud, analytics, business intelligence, predictive analysis, machine learning and blockchain form the core of digital offerings. To explain what the company is doing, Mody gives the example of working with a cold chain company. Sasken has integrated blockchain in the processes of the temperature controlled supply chain, which has a farm-to-fork strategy. The food item tracked is at every point to ensure that high quality is maintained.

It's a 30-year-old 'young company', says Mody, one of Sasken Technology's co-founders. In 1989, Sasken was set up by Mody, Krishna Jhaveri, Suresh Dholakia, Badruddin Agarwala and Muneyoshi Samejima (the other co-founders are no longer with the company) like many Silicon Valley start-ups in a garage in Fremont, California. The operations were moved to Bengaluru in 1991.

Mody recalls the early days of the company when India was still largely unknown in the IT sector. "We started out as a design tool company. Back then, India was not known for the capabilities that we have now. We decided to focus more on engineering services," he says. The company's essential DNA continues to be its focus on hi-tech work such as product engineering and digital transformation. As the Indian IT sector gained momentum in the 1990s, Sasken decided to focus on wireless communications as a key area. "Choosing to specialise in wireless communication allowed us to create significant depths, which is currently a differentiator and today more relevant than ever as more and more devices are getting connected," says Mody.

At present, almost half of Sasken's revenue comes from the top five clients and almost 66 per cent from the top 10 clients. That many of the company's decisions over the years have been right is reflected in its financials. Its annual consolidated revenue for 2018/19 was Rs 504 crore, while profit after tax (PAT) was Rs 90 crore.

According to Mody, the hi-tech equipment sector does not usually see $100 million-plus deals. "While hunting for new clients is not very difficult, client mining is currently a big focus," he explains. In October 2018, the company joined the Enterprise Ethereum Alliance (EEA), the world's largest open source blockchain initiative, which has the Ethereum cryptocurrency. It hopes to leverage the EEA network of over 500 companies to develop Ethereum-based enterprise grade solutions for transportation, industry and manufacturing segments.

The challenges include scaling up existing capabilities, bigger corporations starting India R&D centres and customer exits such as the recent announcement of Intel exiting the 5G smartphone modem business, says Modi. But he is not fazed. "We are mentally tough in terms of not letting such events affect us and coming out even stronger."